Khamenei increases pressure on Rouhani ahead of elections 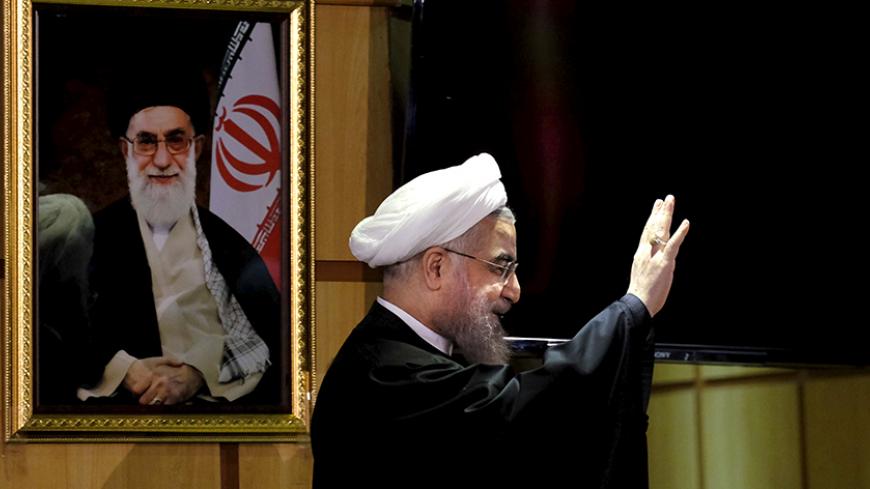 Iranian President Hassan Rouhani waves as he stands next to a portrait of Iran's Supreme Leader Ayatollah Ali Khamenei at the Interior Ministry in Tehran, Iran, Dec. 21, 2015. - REUTERS/Raheb Homavandi/TIMA
Arash Karami
@@thekarami
May 8, 2017

Two weeks ahead of the Iranian presidential election, Iran’s Supreme Leader Ayatollah Ali Khamenei has increased his criticisms of the policies endorsed by President Hassan Rouhani. A week after indirectly criticizing the president for suggesting that diplomacy had averted war, Khamenei criticized a United Nations education program that some conservative Iranian detractors say promotes gender equality.

“These are not things the Islamic Republic can carry on its shoulders and submit to them,” Khamenei said of Education 2030, which is a part of UNESCO's program to wipe out poverty through development. The program, which Iran endorsed in 2015, aims to “ensure inclusive and equitable education and promote lifelong learning opportunities for all.”

Khamenei made clear that he viewed the program as a means for superpowers to impose their policies on other countries. “On what basis does a group that is supposedly international — which has certainly been infiltrated by great powers — have the right to decide what various countries, with different nationalities, different civilizations, with different histories and cultures, should do?” he asked.

“We know what we have to do in the field of education, morality and lifestyle; there is no need for this document,” Khamenei said. “For us to go and sign this document and quietly implement it, no — this is absolutely not permitted, and we have told the responsible institutions.”

“I am disappointed in the Supreme Council of the Cultural Revolution,” Khamenei said of the conservative Qom-based body that is chaired by the president of Iran. “They should have been vigilant. They should not have let it come to this point so that we had no choice but to get involved. This is the Islamic Republic; it is based on the Quran. This is not a place for the faulty destructive corrupt Western lifestyle to infiltrate like this.”

In response to Khamenei’s comments, Abbas Mirzahosseini, the director of communications for the Supreme Council of the Cultural Revolution, said May 7 that the council would implement Khamenei’s demands “in the shortest amount of time possible.”

It is not clear why Khamenei waited nearly two years after Iran's adoption of the UN program to criticize it and then place the blame squarely on a body chaired by Rouhani. Tasnim News Agency wrote May 7 that experts have criticized how Education 2030 calls for “gender equality.” The article stated that the program would create changes in the education system and eliminate certain aspects of religious-based education.

Mahmoud Farshidi, who served as education minister under conservative Mahmoud Ahmadinejad, told Mashregh News May 7 that the problem with the Rouhani administration is that they look outside the country’s borders when it comes to politics, economics and culture. He said the Supreme Council of the Cultural Revolution has failed to live up to its supervisory duties because of Rouhani’s chairmanship. Farshidi also criticized the gender equality aspect of Education 2030, saying, “Using a female as cheap labor and lowering the dignity of women contradicts the goals of an Islamic system and has no compatibility to our national and religious goals.”