A very small number of women in the Gaza Strip have taken jobs as drivers, privately transporting other women and children to provide for themselves and families. 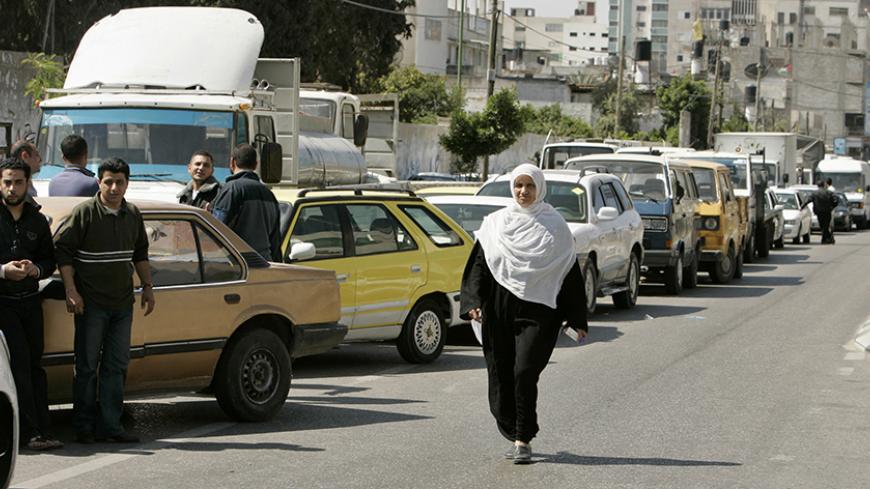 A woman walks past a line of taxi drivers outside a gas station in Gaza City, Gaza Strip, April 7, 2008. - REUTERS/Mohammed Salem 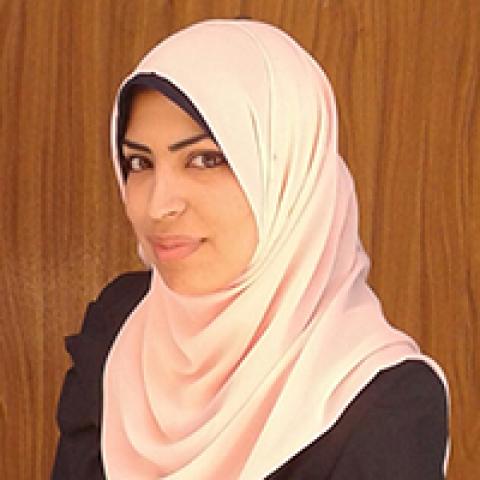 GAZA CITY, Gaza Strip — In the United States, women are accustomed to — and often annoyed by — jokes about female drivers. But there is nothing funny about the topic in the Gaza Strip, where only about 18% of women hold driver's licenses, Jamal Abu Jarad, the head of the public Transportation Workers Union, told Al-Monitor. Those who are trying to make a living from driving are few and far between.

With the high poverty rate of 65% in Gaza, more women are turning to nontraditional jobs. But working as a driver is considered outlandish for a woman and is denounced by families and the community. The very idea offends customs and traditions. And possibly worst of all, it is often seen as an invasion of male space.

Gazan women have worked in male-dominated industries before, such as carpentry, blacksmithing and fishing, to provide for themselves and their families. Some consider working as a driver a dream — a means of freedom. But for women, driving as a profession is considered off limits.

Answering Al-Monitor’s question of whether they would like to work as drivers, Fida Maghribi and Alaa Khalaf, both Gaza City women in their 20s, both said, “We wish.”

Khalaf added, “I have always told my father that my dream is to work as a cab driver. But the answer was 'Absolutely not.' My dream was unattainable.”

Gaza resident Salwa Srour, however, has made that dream a reality. Srour drives a bus at the kindergarten she owns with her sister. She told Al-Monitor, “Problems due to the former driver's negligence, delay and troubles with the kindergartners’ parents prompted me to take the job myself."

The parents have strongly encouraged her, and some people see driving children in a positive light. Yet the social criticism continues to flow. “The Gazan community opposes any unconventional conduct," Srour said. "I survived criticism, sarcastic remarks and people giving me 'the look.' They didn't stop me, because I believe in myself and my work."

Srour has managed to face the criticism judiciously. She recalls handling critics in person with dialogue. “After a while, people understood my job. I am now friends with other drivers; they give me priority during rush hour or in line at gas stations,” she said. “Life is exhausting in Gaza and forces us to opt for jobs that do not fit us at first, but with time, these jobs become enjoyable and familiar.”

Sociologist Arafat Heles confirmed that Gazan society has not reached the point of accepting women working as drivers. “Life is full of problems and insecurity is one of them. This obstructs female professional advancement and freedom, with the parents [often] refusing that their daughters work in mixed-gender workplaces," he told Al-Monitor.

Raghda Nofal, a Khan Yunis resident, has a degree in psychology but feels fortunate to be working as a driver. After graduating, she worked in a temporary position at the United Nations Relief and Works Agency for Palestine Refugees in the Near East (UNRWA). But once those six months were up, she went four years without finding a job. The Palestinian Center for Human Rights said in January that unemployment in the Gaza Strip stood at nearly 47%.

Nofal's father is sick and unable to work. As the eldest child with no brothers, she told Al-Monitor, “I needed to find myself a respectable job."

Recalling her college days, she had an idea. “Transportation was a problem for me during my academic years. Back then, I wished that I had a car." She knew other students must face the same problem. So she decided to become a professional driver, as she already had a driver's license from her time at UNRWA. She convinced her father and he helped with the logistics.

"I contacted a group of female university students and other female workers, and my job is to drive them from and to their working places and universities according to a specific pickup time," she said.

Her father arranged for her to "rent" a private car. She pays the owner 80% of the profits and keeps 20%.

The setup works for her. “I am sure I can’t work as a taxi driver; that idea is unacceptable to the community and my family in Gaza. But I am playing it smart and challenging the community at the same time. I am being respectful in doing this job; I don't [work] late at night, because it does not befit me or my family. I hand over the car to its owner at 6 p.m., and pick it up the next morning.”

Nofal hopes to buy her own car eventually and continue to work. She concluded, “I love my job and I am having a good time with the ladies riding with me. Driving helped me get into many parts of the city. It helps me become patient, because when driving, I am responsible for the lives and health of the people riding with me. It's a good job that allows me to learn something new every day.”