Yara Shalaby, who shocked the male-dominated racing scene by taking part and winning awards in rallies in Egypt and Gulf states, wants to teach other women to follow their dreams and fight stereotypes. 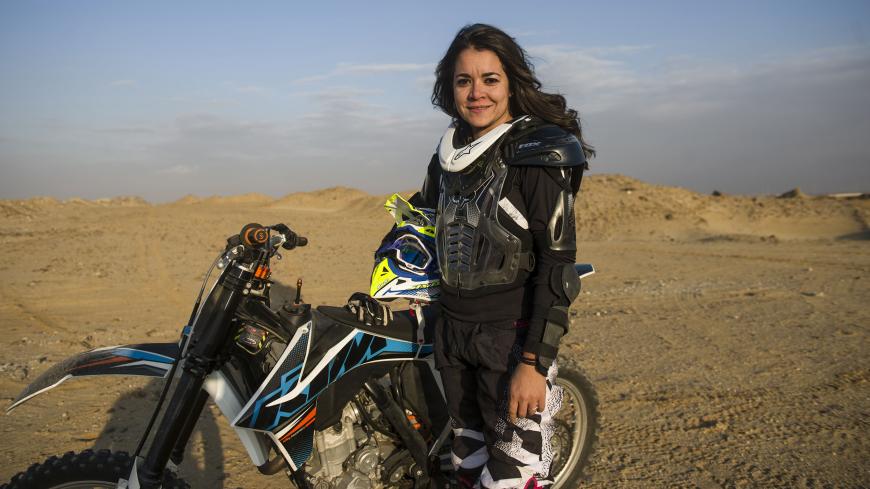 Egyptian female rally driver and biker Yara Shalaby poses next to her trail bike during a ride in the desert on the outskirts of Cairo, Egypt, Dec. 30, 2015. - KHALED DESOUKI/AFP/Getty Images

Egypt’s first female rally driver, Yara Shalaby, wants to pave the way for women to follow in her footsteps as a racecar driver and crush prejudices in a conservative society. Shalaby has set her sights on establishing a female-only racing school.

“The school will teach women how to drive down the dusty deserts of Egypt,” Shalaby, 36, told Al-Monitor. “It will also teach navigation, car maintenance and mechanics.”

Shalaby, who has been interested in rally driving since she was a child, said, “Right now I am teaching women rally driving, but this is only on a small scale. I take women in my car and we go to the desert to train. However, I hope that soon I can find a suitable sponsor who will provide funding for a school.”

Shalaby dreams of running a school that will include a space where she can teach women the basics of rally driving. She will also need cars for the women to use to practice their racing skills.

In 2016, she set up Egypt's first all-female Gazelle Rally Team and trained all seven members herself.

Shalaby has an impressive collection of prizes in rally racing, a sport dominated by men. She has competed in races in Qatar and the United Arab Emirates, and ranked first in the national category in Egypt’s 2014 Pharaons International Cross Country Rally. In 2013 and 2014, she was among the top racers in Egypt’s most important competitions, including El Gouna Rally Cup, Al Remal Desert Challenge Rally and Al Farouky Desert Challenge.

“I was always told that I cannot be a rally driver, as it is a sport only for men. But I believe that sports are not restricted to a specific gender — it is for everyone,” said Shalaby, who is the mother of an eight-year-old son and an IT specialist at a bank.

Shalaby’s wish to race in the desert was born when she was a child and went with her three brothers on safari and camping trips. “Many people used to mock my desire to be a rally driver. They said that women cannot drive in general — let alone race. However, I liked the challenge and I was determined to change people’s minds,” she noted.

Now that she has received several prizes, Shalaby gets positive feedback and encouragement from the people who used to mock her, most of them men. “Now I want other women to get into racing and prove the social stereotypes wrong,” Shalaby said, adding that her school would be the first female-only racing school in the Middle East.

Although women rally racers are rare in the Middle East, Palestine has its own all-female rally racing team. Speed Sisters consists of five women who broke into the male-dominated sport in 2009. The Palestinian team rebuilds ordinary cars to compete against well-established male teams across the West Bank, with great success.

“There is a common stereotype in the Arab world that women are bad drivers, so women do not feel encouraged to get involved in car racing and rally driving. But women can excel at any sport if they are passionate about it,” Shalaby said.

Heba El-Sherif, one of Shalaby’s trainees, said that Shalaby taught her to drive a car and ride a dirt bike in the desert, and that she gave her the opportunity to pursue her dream of becoming a rally driver and a car mechanic. “I am forever grateful to her for her generosity with her time, her experience and her vehicles,” Sherif told Al-Monitor.

Sherif, 38, now wants to teach other women rally racing. “It will be very good and inspirational to teach women this male-dominated sport,” she said.

In recent years, young women have started to make their mark in Egypt’s male-dominated sports and auto businesses through initiatives that greatly contribute to empowering women on the road.

Rania Ayman is the founder of a startup called Entreprenelle, which aims to empower women and support them in all sectors dominated by men. She told Al-Monitor that many women are interested in sports that involve cars, and that they want to prove that they are good at driving and racing.

Ayman said, “Those sports have long been dominated by men, but now women are invading them." She added, “In Egypt, it is uncommon for women to be involved in rally driving. But I do not find it strange — women can do anything."