Turkish President Recep Tayyip Erdogan seems closer than ever to his dream of an executive presidency as the newest polls give him a slight edge. 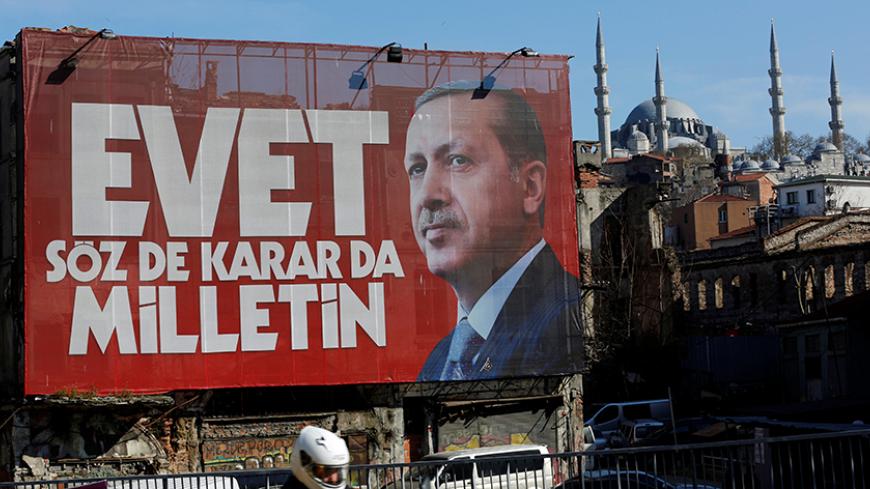 A billboard showing a picture of Turkish President Recep Tayyip Erdogan and a slogan that reads, "Yes. It is for the people to speak and to decide," is seen on a building ahead of the constitutional referendum in Istanbul, April 13, 2017. - REUTERS/Murad Sezer

Turkey’s leading polling firm Konda announced on its website April 13 that the “yes” votes were ahead in the country’s upcoming presidential referendum. The people of Turkey will vote on April 16 whether to abolish the post of prime minister and give expanded executive powers to the head of state, a long-time dream of Turkish President Recep Tayyip Erdogan.

But perhaps keeping in mind fellow pollsters’ mistakes last year in predicting that Britain would vote to remain in the European Union and Hillary Clinton would become the president of the United States, Konda’s announcement comes with a caveat: “When this forecast is considered within the survey’s margin of error, a final judgement might be misleading.”

The news may come as a surprise for the “no” camp, which as Al-Monitor reported March 27, previous surveys had given a slight edge.

So what gives? According to the news site T24, Konda ascribes the shift to several factors. Based on the extended report that the company delivered to its customers and T24 shared online, Erdogan’s stump speeches, use of religious symbols and his sham confrontations with Germany and the Netherlands gave him a net boost of 7%.

Gezici Research, another reputable polling company, corroborates these trends. Gezici announced April 13 that the “yes” side stood at 51.3% and the “no” side remained at 48.7% based on their face-to-face surveys with 1,399 respondents in 10 provinces April 8-9. Tellingly, Gezici felt the need to point out that its pollsters found it very hard to locate citizens who were willing to participate because of the divisive and disconcerting nature of the referendum campaign.

Despite the low margins of error, two factors could throw off these estimates: Konda and Gezici conduct their surveys exclusively in Turkey. However, the daily newspaper Hurriyet reported April 10 that some 1.4 million Turks who live abroad (47% of the total — the highest turnout rate among Turkish expats so far) living in 57 countries have already voted in the referendum. If we consider that Turkey itself has 55 million eligible voters, even a 2% difference could alter the result.

It looks like both sides in Turkey’s historic presidential referendum will have to hold their breaths until the last vote is counted on April 16.