What's behind Kurdish organizations being shut down in Syria?

The democratic self-rule administration in northern Syria closed the offices of dozens of unlicensed organizations in a move deemed to have political motivations. 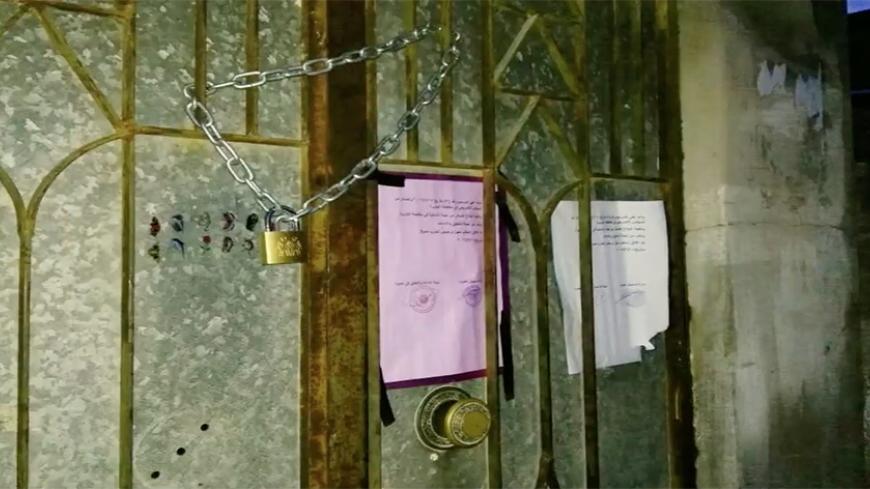 One of many organizations forced to close by new rules imposed in Kurdish northeast Syria is seen in this still from a video uploaded on March 24, 2017. - Youtube/Aso Network

ERBIL, Iraqi Kurdistan — The democratic self-rule administration in northeast Syria implemented a decision on March 14-15 requiring all unlicensed political parties, groups and civil society organizations not under the umbrella of the administration to obtain licenses within 24 hours. Otherwise, their offices would be closed and their activities halted. The administration, which governs areas in northeast Syria and the Kurdish areas in Afrin, Kobani and Jazeera, issued the decision on March 13.

The decision affected dozens of offices. It complies with the provisions of the party law issued by Jazeera's legislative council, as per Decree No. 7, on April 15, 2014. The joint authority of Jazeera approved of the law, according to Chairman of the Jazeera executive council Abdul Karim Sarokhan. He told Al-Monitor, “The decision aims at organizing social and political life, and it ingrains the legitimacy of the legislative council that is formed of social components: the Kurds, Arabs and Syriacs.”

He said, “The laws of the legislative council apply to everyone, and the council is the product of the revolution of July 19, 2012, which is an extension of the Syrian revolution that represents — along with the military force — the people.”

The main parties affected by the decision to shut down unlicensed groups include the Kurdish National Council (Kurdish acronym is ENKS), a coalition led by the Kurdistan Democratic Party of Syria (PDK-S). The Democratic Union Party (PYD) spearheads the democratic self-rule administration, and Sarokhan claims that the PYD has a license granted by the self-rule government.

Abdul Salam Ahmad, the co-chairman of the public relations committee of the Movement for a Democratic Society (TEV-DEM), told Al-Monitor that the parties that shut down their offices had the chance to obtain a license to make their work legal, but they did not act on it. He said that many other licensed parties continue to operate. Ahmad believes that any decision issued by the legislative council in the democratic self-rule areas requires commitment and respect to organize social life.

Ahmad does not believe the decision undermines the democratic process in the region. The parties affected by the decision thought it was forced on them by a political party, the PYD, which has the support of Kurdish parties in the region, namely the People’s Protection Units and the Syrian Democratic Forces. Sarokhan said that democracy itself needs discipline and organization, adding that “democracy does not thrive on chaos.”

Mohsen Taher, a member of the PDK-S political bureau in Syria and chairman of local councils at the ENKS, told Al-Monitor, “The decision stems from an oppressive policy against the Kurdish people.”

He said, “The ENKS will not cave in to the extortion from an authority monopolizing life with the power of arms [in reference to the PYD], and we will escalate all forms of peaceful militancy and democracy to protest the decision.”

The parties whose offices were shut down agree that the decision goes against freedoms. Imad Youssef, the general coordinator of the Kurdish Youth Movement that was affected by the decision, told Al-Monitor, “The decision was part of a systematic plan of political elimination that one party is conducting against its opponents. The office shutdown came after a series of arson [attacks] and other attacks on the offices of the ENKS and other youth movements.”

He added, “The Kurdish movement has gotten used to working in spite of the authorities’ will for years, and it will stand its ground with high morale and strong resolve.”

Youssef believes the decision stems from the failure of the PYD to market itself abroad and to be present at international conferences on Syria, such as in Geneva.

Shafan Ibrahim, a member of the Secretariat of the Student and Democratic Youth Union of Kurdistan in Rojava (the Kurdish term for western Kurdistan in Syria), whose offices were also closed, told Al-Monitor, “The decision to close the offices of the union and halt its activities in Derek, Alian, Qamishli, Hasakah, Amouda, Ras al-Ain and Derbasiya hinders a youth movement from developing society and offering sports, music and artistic services."

The decision did not affect parties under Syrian state control like the Baath Party and the National Progressive Front. Ahmad said that the decision only involved parties in the regions of the self-rule administration. “Those two parties do not have offices in the areas under our control.”

The decision not only closed partisan and youth movement offices but also shut down the Kurdistan Women Union (KWU) offices. Indeed, a KWU office in Derek was raided by a military force and closed for good.

About whether this unilateral decision undermines democracy in society, Ahmad said that the democratic self-rule government includes several parties, movements and groups, and the closure decision does not target everyone.

Sarokhan believes the decision is legitimate, noting that if international organizations condemn the incident, the response would be that the decision of the self-rule administration is legal.

In turn, the leader of the Kurdish Yekiti Party in Syria, Mohammed Khair Banco — whose party was subject to the closure decision — told Al-Monitor, “The ENKS does not recognize the legitimacy of this administration,” pointing out that the decision hides a grudge against the targeted party. “The decision was not limited to the closure of offices, as most of the offices were attacked by youth groups affiliated with the democratic self-rule government."

The decision was not limited to Kurdish parties, but also included the offices of the Assyrian Democratic Organization (ADO) — an Assyrian-Syriac party that opposes the Syrian regime and is part of the Syrian opposition. The organization condemned the decision saying it incites civil strife.

The organization reopened its offices on March 28, without giving details on the reopening mechanisms. The prominent Kurdish parties whose offices were closed also included the Kurdish Democratic Progressive Party (KDPP) in Syria, which issued a statement condemning the closure of offices, describing the decision as arbitrary.

When asked about the reopening of the offices of some parties, Sarokhan said ADO had opened its office and that the KDPP was also entitled to reopen its offices since the two parties had referred to the democratic self-rule administration 24 hours following the issuance of the decision on the need for a license, which was the defined time limit for submitting licensing applications to the government.

Kurds step up efforts to form self-government in northeast Syria