Did France end efforts for intra-Kurdish rapprochement in Syria?

The Kurdistan Democratic Party announced the end of French efforts to achieve rapprochement on the Syrian Kurdish scene, blaming the Democratic Union Party for failing to meet their demands. 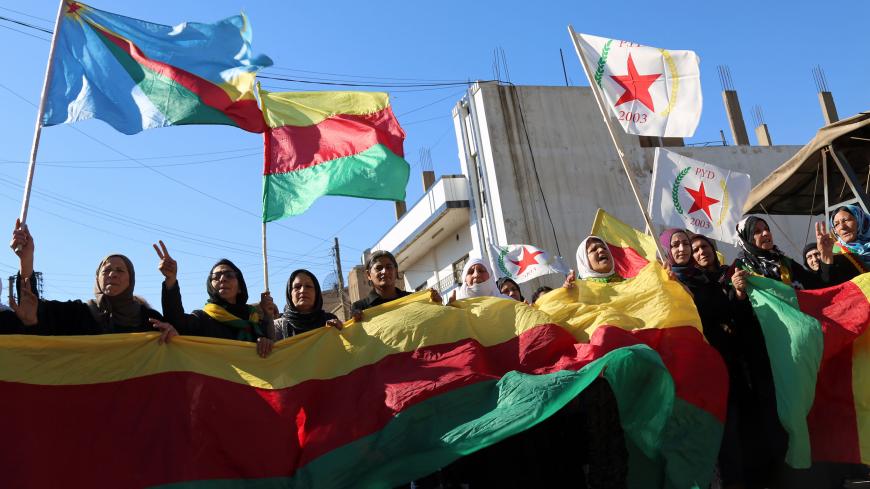 Kurdish women hold flags of the Democratic Union Party (PYD) during a demonstration against the exclusion of Syrian Kurds from the Geneva talks in the northeastern Syrian city of Qamishli, Feb. 4, 2016. - DELIL SOULEIMAN/AFP/Getty Images

The Kurdistan Democratic Party of Syria (KDP-S) announced Aug. 1 that French endeavors toward Kurdish-Kurdish rapprochement have come to a halt.

The political report of the party stated, “Regarding the endeavors and efforts toward achieving a form of consensus or understanding on shared issues between the Kurdish National Council in Syria (KNC/ENKS) and the Democratic Union Party (PYD), we, the KDP-S and the KNC confirm that no meeting has ever been held except for what happened in Paris and only once through the mediation of France. We also assert that these endeavors stopped a while ago because the PYD did not cooperate in the issue of the abductees and the politically and judicially pursued members. France asked the PYD to clarify its stance vis-a-vis the detainees after receiving a detailed list of their names and the date of their abduction.” The KNC and the PYD had met in Paris in April.

In a video report by al-Arabiya channel on June 18, PYD leader Saleh Muslim praised the initiative of France and the international coalition to unite Kurds in Syria. In the same report, Mohammad Ismail, a KDP-S political bureau officer, said that they accept the French initiative, as it fulfills its purpose and ensures dialogue and rapprochement.

Mohsen Taher, member of the KDP-S political bureau and head of the local councils of the KNC, told Al-Monitor, “Since the start, we gave the French mediators our remarks that pave the way for measures to build trust. They were positive and showed understanding. But, neither we nor the French felt the PYD were serious regarding the discussed issues.”

Taher fears for the Kurdish region based on Turkish threats. “I think the quick developments east of the Euphrates have overshadowed and jeopardized the French initiative," he said. "The possible scenarios are either to end the talks on a consensual note that pleases the US and Turkey or move toward war, conflict and Turkish military intervention.”

Turkish Foreign Minister Mevlut Cavusoglu announced Aug. 11 that Turkey “will expel People’s Protection Units and the Kurdistan Workers Party from eastern Euphrates.” Regarding their stance as a party and council, Taher said that “there is a possibility of resuming the French initiative to bring Kurds together and in uniting the Kurdish stand to avoid threats and protect the Kurdish region, based on trust and international solidarity.”

Taher added, “The KDP-S will not save any effort to unite Kurds, and we will cooperate with any international mediation, especially the French, which aims at uniting our ranks and position on Syria in general, and the Kurdish movement in particular.”

Al-Monitor tried to contact the PYD and autonomous administration leaders, but they did not respond.

Ahmad Suleiman, a political bureau member of the Kurdish Democratic Progressive Party in Syria (PDPKS) — distancing itself from the Kurdish-Kurdish conflict and calling for dialogue — told Al-Monitor, “The PDPKS was not banking on the success of the French initiative since the start, and we clarified our stance to the French, despite our full support for the initiative. Such an initiative cannot solve the pending issues between the two parties (the PYD and the KDP) because they are unable to reach an understanding amid the regional situation.”

Suleiman believes the situation will worsen and tensions will peak. He said, “The tensions and intra-Kurdish disputes won’t allow Kurds to influence the powers intervening in Syria and the Kurdish area. Instability and threats are looming large on the horizon.”

Regarding the possibility of forming a new administration and ruling structures that enjoy the approval of the wide social base, Suleiman said, “It all depends on how responsive the Kurdish parties are and how willing and decisive they are to reach an understanding. This understanding should serve the interests of Kurds and at the same time fit with Syrians’ interests in general, while shielding the Kurdish areas from serious threats.”

Suleiman noted that the Kurdish-Kurdish understanding ensures “preserving the gains that resulted from huge sacrifices and convincing all parties that Kurds are an integral part for resolving the situation and instilling stability in Syria.”

Some observers believe the French initiative established Kurds’ rights in the new Syrian Constitution. Political researcher and activist Omran Mansour told Al-Monitor over the phone from Paris that France wants to guarantee Kurds’ rights in Syria and that it is sorry that the French endeavors and initiative have so far failed.

He noted, “Kurdish-Kurdish consensus is needed first, followed by Kurdish-Arab understanding and finding new Kurdish legal ground to deal with the Syrian government and the Arab forces in the opposition. But partisan interests got the best of the situation, and Kurdish political parties were unable to overcome their differences. Therefore, the initiative was frozen.”

Mansour added that if the safe area in the eastern Euphrates is formed, “it would be based on the decision of the disputing countries on Syrian territories, and Turkey wouldn’t agree to a Kurdish role in Syria’s future. If France had succeeded in its initiative, a new Kurdish structure capable of negotiating with Turks and the regional powers would have been able to prevent the establishment of this region and dispel all Turkish excuses and concerns.”

Mansour noted, “The peshmerga Rojava will be part of the US equation and decision to beef up military forces that will guard and manage the safe area. There are concerns about demographic changes in the Kurdish area, especially since Turkey will try to naturalize Syrian refugees in the Kurdish area in eastern Euphrates instead of sending them to Arab provinces like Raqqa and Deir ez-Zor.”

Some parties were surprised with the decision to stop the initiative. Akram Hussein, an independent Kurdish politician, told Al-Monitor, “Why did the KDP-S announce freezing the French initiative endeavors, knowing that France should have been the announcing party? We have not heard from the PYD yet. But, was the initiative stopped because its timeline ended or because of the declared conditions or other reasons? In any case, stopping efforts and endeavors for rapprochement is bad, because negotiations and dialogue regarding the Kurdish future in Syria should remain on the table.”

Hussein believes that each party will accuse the other of obstructing efforts to reach an understanding. He criticized the autonomous administration that should have “built trust by opening the closed offices of Kurdish [groups], releasing the KNC detainees or revealing their fate, ensuring freedom of political, media and civil work and setting the stage for a common Kurdish stand. It should have also taken a stance and formed a delegation to represent Kurds in international conferences and events, especially in the Syrian Negotiation Commission, and worked on restructuring the current administration to serve the partnership with all components of the Kurdish area, which is facing a real threat to its existence from Turkey.”

Aldar Khalil, a leader in the Movement for a Democratic Society (TEV-DEM), told a local satellite channel that they do not have any political detainees and that the other party should stop asking for such demands.

"The KNC had handed over a list of 12 names to the French, claiming the self-rule administration and the PYD were detaining them,” he said.

Kurds in Syria are expecting political consensus on Syria, in general, and Syrian Kurdistan, in particular, especially with the increasing Turkish threats in the eastern Euphrates. The political and public scenes are gripped with fear and worry.