Unlikely partners join forces to lead by example in Syria

An opposition group known as Syria’s Tomorrow and Kurdish self-rule proponents have forged an agreement they hope will bring other opposition factions together and enlist the support of Arab countries to end the war and build a civil democratic pluralist state. 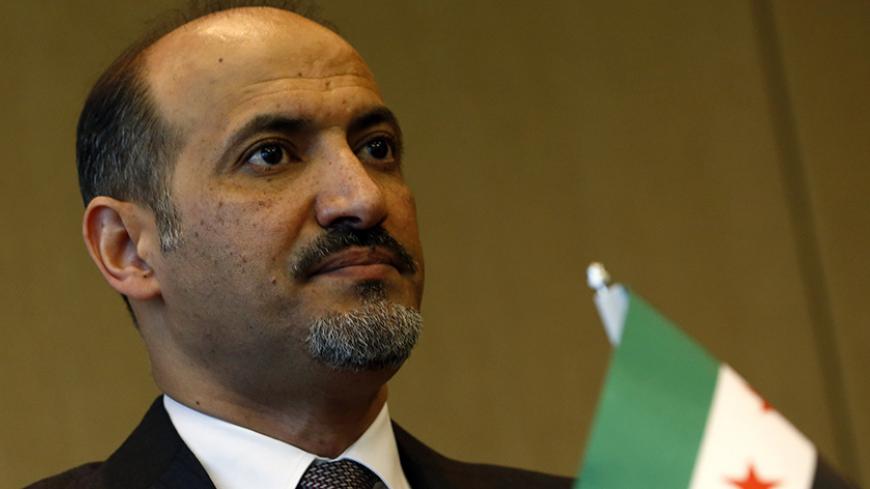 Then-Syrian opposition leader Ahmad Jarba makes a statement after the conclusion of talks on Syria, in Geneva, Jan. 31, 2014. - REUTERS/Denis Balibouse

GAZIANTEP, Turkey — At least one peace-seeking pact appears to be moving forward in Syria. An agreement recently inked in Cairo is being touted as an unprecedented alliance between the Kurds and a Syrian opposition group.

The deal was reached Sept. 10 between Syria’s Tomorrow opposition movement, led by Ahmad Jarba, and the Kurdish Democratic Union Party (PYD), with the aim of working jointly "toward building Syria’s future.” Jarba was backed by Saudi Arabia when he was president of the Syrian National Coalition (2013-14), while the Kurdish pro-self-rule PYD is said to be collaborating with the Syrian regime.

In the agreement, both parties call on all Syrian factions to search for rational ways out of the Syrian quagmire, expressing the belief that the current events in Syria represent a power struggle between the various Syrian factions and a distortion of the Syrian revolution. They also agreed that the only solution to the crisis lies in the Syrian opposition and regime sitting at the negotiating table under the auspices of the United Nations and other sponsor states, namely Russia and the United States.

In a Sept. 11 interview with ANF news agency, Jarba said the agreement with the self-rule administration manifests the strong ties that link Arabs and Kurds in Syria. Ahmad Awad, a member of Syria’s Tomorrow movement’s political bureau, said Sept. 16 that his group welcomes any agreement that puts an end to “the loss of life caused by the hellish Syrian war.”

Speaking to Al-Monitor, Eldar Khalil, a leader in the Kurdish Movement for a Democratic Society (TEV-DEM) and a representative of the self-rule administration, said the agreement aims to bring together the Syrian national opposition factions, which seek a peaceful solution to end the country's destruction.

Mohammed Khaled al-Shaker, the director of the Center for Studies and Research in Syria’s Tomorrow movement, told Al-Monitor the agreement is necessary for the convergence of all Syrian democratic national forces. He added, “We find ourselves in a civil war that requires that everyone sits around the same table to bring Syria out of its predicament.”

The final agreement calls for overthrowing the regime and all of its symbols, creating a national umbrella for all, building a state of law, establishing in Syria a civil democratic pluralist state while maintaining the integrity of Syrian land, and continuing the fight against terrorist organizations such as the Islamic State.

The agreement is designed to pave the way for other warring parties in Syria to realize that fighting is not the solution and to work toward political solutions.

Khalil rebutted accusations leveled by activists and some members of the Syrian opposition that the Kurds want to secede, saying, “A decentralized rule would be ineffectual in Syria.”

He noted the symbolism of the agreement being signed in Egypt, which is known for its Arab nationalism, "refutes all claims that federalism is but a prelude to partitioning [Syria] and seceding."

"The geographic federalism that we call for is the best way to achieve unity and eliminate division” between Arabs and Kurds, he said.

On the other hand, Shaker focused on the concept of a civil state and the need to prevent Islamization from being imposed on Syrian society. Still, both parties — the self-rule administration and Syria’s Tomorrow movement — share secular ideas, as they both publicly oppose extremist thought and terrorism.

In response to whether the United States and Russia played a role in the agreement, Khalil said only that he respects their position that the Kurds should be represented in negotiations. "We do not believe that a negotiated solution is possible in the absence of the self-rule administration’s political and military wings.”

He further lauded Egypt’s sponsorship of the agreement and added that the failure of Gulf countries to work toward a rapprochement among Syrian factions “is a black mark on those countries’ record.”

Khalil also described the agreement as “a way to melt the ice” between Kurds and the Syrian opposition. He added that “opening a Washington bureau for the self-rule administration is probable,” just as one was established in Moscow in February.

Analysts and opposition figures note Russian support for Kurds. Syria’s Tomorrow had visited Moscow June 26 at the invitation of the Russian Foreign Ministry to discuss a political solution for the Syrian crisis.

For his part, Shaker rejected the notion that Russia played any role in the agreement and believes it represents a national stance between two Syrian parties. He said, “The agreement emanated from our nationalist position and determination. Prior to this agreement, since the first Geneva convention in January 2014, we relied on Russia’s ability to put pressure on the Syrian regime to engage in a serious political process.”

He also cited a need to espouse the role of the Syrian opposition in any negotiations: “Representing the factions and individuals is not important. The importance lies in having the philosophies espoused by all Syrian opposition factions represented in any conference.”

The parties’ closing statement calls on the United States and Russia to better coordinate their efforts in Syria. It also urges Egypt, Saudi Arabia and the United Arab Emirates to take an active role in resolving the Syrian crisis.

The United States and Russia had agreed on a cease-fire in Syria that went into effect in early September. The truce was welcomed by Arab states, Turkey and the European Union, and it was approved by the Syrian regime, while the Syrian opposition did not explicitly back it. However, the truce started failing when the regime and the opposition each accused the other of violating the truce, and the regime launched an assault on Aleppo.

In contrast to the Syrian opposition's position regarding Kurdish fighters, Shaker said that the Kurdish People’s Protection Units was a military force engendered by the Syrian war, “born from the womb of the Syrian revolution, just as the Free Syrian Army and other factions were.” He added, “The Syria’s Tomorrow movement is working to abolish the culture of war from everyday reality and transform the negativity of conflict into positive reconstruction.”

It's noteworthy that Jarba is viewed as a strategic ally of the Kurdistan Regional Government (KRG) in Iraq. This is because the Shammar tribe, to which Jarba belongs, has historical ties with Kurds and established alliances with them to fight against other tribes in Syria's Jazeera region last century. On the other hand, tensions mar the relationship between the Rojava (western Kurdistan) administration in Syria and the KRG and its president, Massoud Barzani. The self-rule administration — the PYD — is accused of being affiliated with the Kurdistan Workers Party (PKK) led by Abdullah Ocalan. During the 1990s, there was constant fighting between the KRG and the PKK.

Shaker of Syria's Tomorrow added that part of the agreement deals with bolstering relations with all Syrian, Arab and regional parties on the basis of mutual respect and Syria’s national interests. TEV-DEM's Khalil said, “In his capacity as an ally to Iraqi Kurdistan, Jarba is viewed as an ally to our brethren in Iraq.”

Furthermore, Khalil rejected the notion that foreign pressure was dictating the moves undertaken by Syrians and the overall situation in Syria: “Whomever believes that solutions are being imposed upon the Syrians is gravely mistaken, and any agreement reached between the Syrian factions will receive the required support.”