After failing in efforts to push Obama toward further involvement against Damascus in the Syrian conflict, Saudi Arabia is hoping the airstrike launched by Trump against a Syrian air base early this morning is not a one-off. 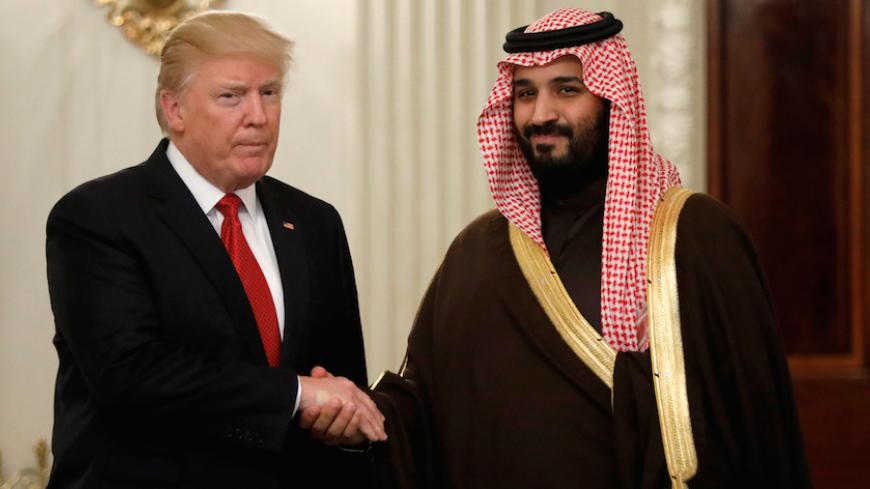 Saudi Arabia was quick to endorse the American cruise missile attack on the Syrian air base responsible for the horrendous chemical massacre in Idlib. Saudi expectations of future American steps to unseat Bashar al-Assad are likely to be extravagant.

The Saudis have wanted Washington to get rid of Assad for years. Riyadh believes the Assad dynasty is the key to Iranian influence in the Levant. In the 1980s the Saudis tried to get then-President Ronald Reagan to oust Bashar's father, Hafez al-Assad, and in the 1990s they hoped Washington would entice Damascus away from Tehran by a peace agreement with Israel on the Golan Heights. Neither strategy worked, but both relied on American heavy lifting to do the job. Both expected Washington to be capable of delivering more than it could. That is a common feature of Saudi foreign policy: to expect the United States to be all powerful.

When the Arab Spring came to Syria, the Saudis hoped an Afghan-style mujaheddin war with covert Saudi and American support would do in the Assads and the Iranians. Riyadh spent billions on the rebels, but Assad is stronger today than at the onset of the rebellion. The Saudis were deeply disappointed by President Barack Obama's vacillation on his approach toward Syria.

The Saudi kingdom now is encouraged that President Donald Trump's administration shares their enmity with Iran. Trump's decision to sell F16s to Bahrain — the kingdom's closest client state — despite human rights concerns was welcomed in Riyadh as a sign Washington finally understands that Iran is the source of instability on the island. The Saudis are looking for a free hand in Yemen and American support for an attack on Yemen's port of Hodeidah. They expect human rights and gender equality issues to be off the table, but more sanctions on Iran are welcomed.

King Salman bin Abdul-Aziz Al Saud spent considerable energy at the Arab summit in Amman seeking to secure pan-Arab opposition to Assad and Iran, even trying to coax Iraq away from its Shiite partner. Earlier this year he traveled to Indonesia, China and Japan to press an anti-Iran agenda.

Saudi commentators were alarmed when US Secretary of State Rex Tillerson and UN Ambassador Nikki Haley said Trump was abandoning the Obama administration's public demand that Assad must go. An important editorial noted that the Trump administration's big defeats on health care and immigration issues suggested his team might be simply incompetent and thus unlikely to fulfill Gulf Arabs' high hopes for defeating Iran. The editorial even warned that impeachment over whether the president colluded with Russia to subvert the American democratic process is unlikely but not impossible, so the Arabs should avoid putting all their hopes on Trump.

The cruise missile strikes should give the Saudis more confidence that the Trump administration is competent, capable and even decisive. But it will also raise expectations. The royal family will expect an American strategy to get rid of Assad sooner rather than later. More military strikes against Syrian regime targets and the Iranians are what the Saudis want to see. The Russian presence is a complicating factor, but in Riyadh's eyes it should not give Moscow a veto over steadily more aggressive attacks on Assad's forces, the Iranians and Hezbollah. More arms for the opposition is a priority for the Saudis.

Aside from money, the Saudis have little to add to a campaign against the Assad regime and its Iranian supporters in Syria. The kingdom is bogged down in Yemen, and the Royal Saudi Air Force has its hands full with bombing the Houthi rebels and the forces loyal to former President Ali Abdullah Saleh. Saudi air defenses are absorbed in stopping missile attacks on Saudi cities from Yemen. Also, the kingdom has been very averse to using its ground forces — either the regular army or the Saudi Arabia National Guard — inside Yemen and is even less likely to send them to the more distant Syria. Saudi intelligence is very good at fighting terrorism at home but has no experience in covert military activities like Iran's Islamic Revolutionary Guard Corps' Quds Force.

So, the kingdom has to rely on the American card. The royal family will raise money, but it can't do much more for the cause in Syria given its enormous commitment to the Yemeni adventure in which King Salman and his favorite son, Defense Minister Deputy Crown Prince Muhammed bin Salman, have stacked all their credibility on.

The kingdom has been deeply frustrated for years that, in their eyes, the Iranians have been the principal beneficiary of American policy in Iraq and Syria. They blame Presidents George W. Bush and Obama for not understanding the region and naively giving Iran too much influence. They have seen their own interests diminished since 2003, as Iran has grown stronger in Baghdad and Damascus.

If the cruise missile attack is a one-off and not followed by more aggressive American military action, Riyadh will be bitterly disappointed. It will still cooperate on confronting Iran in the Gulf and in Yemen, but its high hopes that someday, somehow, America will rid Syria of Assad will be again crushed. If the administration is loose in its rhetoric about how far it is prepared to go in Syria in getting Assad out, its words will come home to haunt the relationship with the kingdom.