It remains unclear whether Pakistan's Gen. Raheel Sharif will be offered, or take up, the position of supreme commander of the Saudi-led "Islamic military alliance." 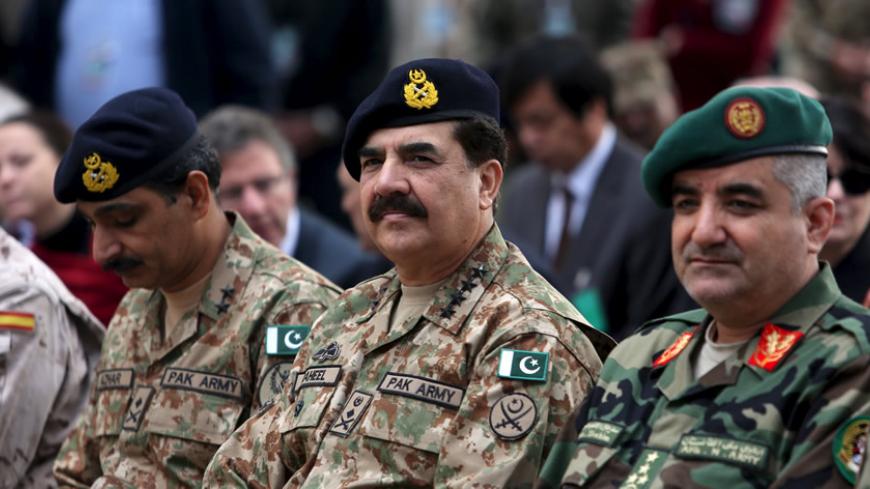 For the last two months, mystery and confusion has shrouded Gen. Raheel Sharif, Pakistan's retired army chief, over whether he will be the supreme commander of the Saudi-led "Islamic military alliance" created by Riyadh in 2015. News of Sharif's appointment has been widely criticized in Pakistan, and the drama underscores the friction in the Saudi-Pakistani relationship.

Sharif retired as chief of army staff last fall. The highlight of his tenure in office was a major crackdown on the Pakistani Taliban that has plagued the country with horrific terror attacks. Pakistan continued to support other terrorist organizations such as Lashkar-e-Taiba, but it is at war with the Pakistani Taliban and now with the Islamic State (IS) that has created an infrastructure in the country.

The Saudi-led Islamic military alliance now has 40 members. Some Saudi commentators have argued that Pakistan should provide a commander for the group because it is the only Muslim country with nuclear weapons. In fact, Pakistan has the fastest growing nuclear arsenal in the world. A leader who has commanded a nuclear strike force would have credentials unlike any other Muslim general.

Saudi Arabia has depended on Pakistani military support for decades. In the 1980s, thousands of Pakistani troops were deployed in the kingdom, but Pakistan refused Saudi requests to send troops to join the Saudi war in Yemen against the Houthi rebels. In 2015, the Pakistani parliament voted unanimously against joining the Saudi-led coalition in Yemen; only the extremists such as Lashkar-e-Taiba supported deploying troops to Yemen.

Appointing Sharif commander of the military alliance would enhance the credibility of the so-called Arab NATO. The alliance has carried out military exercises in the kingdom, but it has not developed a strong joint command or headquarters staffed by representatives of its 40 members.

For two months now, it has been unclear whether Sharif has been formally offered the post or if he will take it. Initially the Pakistani Defense Ministry said he had accepted the position, but no Saudi sources confirmed this. Recently, the Saudi media has reported that he is on track to get the job, but again that is uncertain.

Much of the uncertainty involves controversy inside Pakistan about whether Sharif should take the command. Since the Islamic military alliance excludes Iran and Iraq, it is seen as a Sunni entente against the Shiites. The alliance exercises have been clearly targeting Iran.

Pakistan's large Shiite community is opposed to joining a blatantly anti-Iranian alliance, and Sunni Pakistani politicians are also against tilting the country against Iran. Pakistani officials want to maintain cordial relations with both Riyadh and Tehran, as sectarian tensions are already intense and violent in Pakistan. The Pakistani Taliban and IS are exploiting the sectarian divide and targeting Shiites. Pakistani Prime Minister Nawaz Sharif (not related to Raheel Sharif) is especially keen to prevent the country from moving away from a balanced approach to the Saudi-Iranian rivalry.

There may also be some disagreements inside the kingdom about whether Sharif should be in command of the alliance. Saudi Deputy Crown Prince and Defense Minister Mohammed bin Salman has been the leading force in the creation of the alliance, and his influence might be seen to be diminished if the Pakistanis took command.

The Saudis are very hopeful that the new US administration will be a strong opponent of the Iranians. Riyadh wants Washington to reverse Tehran's gains in Iraq and Syria; it wants uncritical American support in Yemen.

Pakistan is much more nervous about US foreign policy. On Jan. 30, Lashkar-e-Taiba leader Hafiz Saeed was placed under house arrest, to create the impression that the group is being controlled. This is a well-practiced Pakistani game intended to forestall pressure for Pakistan to be tough on terrorism.

The mystery surrounding Sharif may never be resolved; the confusion is indicative of some dysfunctional decision-making in both Riyadh and Islamabad.