Is Pakistan pivoting away from Saudi Arabia?

Pakistan is facing strong domestic opposition against providing support to the Saudi-led airstrikes in Yemen, and its parliament came to a unanimous decision to stay neutral in the conflict, to the chagrin of Saudi Arabia. 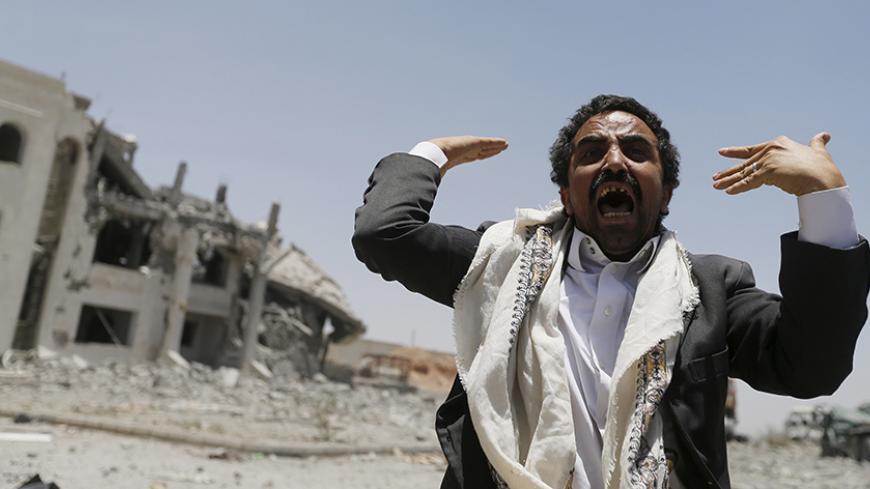 A Houthi militant reacts at the yard of the residence of the military commander of the Houthi militant group, Abdullah Yahya al Hakim, after an airstrike destroyed it, in Sanaa, April 28, 2015. - REUTERS/Khaled Abdullah

Saudi Arabia continues to press Pakistan to provide tangible support for its war in Yemen. Most Pakistanis are pushing back and criticizing the kingdom and its gulf allies in unprecedented candor.

Pakistani Prime Minister Nawaz Sharif and his senior army leadership traveled to Saudi Arabia last week for another consultation on Riyadh's request for military support for the campaign against the Houthis. Sharif said after the visit that he was not confronted with a "wish list" and he reiterated Pakistan's commitment to defend the kingdom if it is attacked. But the Pakistani leadership offered no tangible military aid. The prime minister's brother, Shabaz Sharif, has also visited Saudi Arabia separately to try to reassure Gulf leaders, but he could not calm the tensions either. The Sharif government is clearly uncomfortable with saying no to its Gulf benefactors but it faces strong domestic opposition to the war.

The Pakistani parliament's unanimous decision to stay neutral in the Yemen war has been widely praised in the country. A distinguished professor of physics, Pervez Hoodbhoy, wrote an editorial this week titled "Let the Saudis Fume," praising the Sharif government for rejecting the "GCC diktat" and saying no to "an irritated septuagenarian monarch and his angry princes." The article assured Pakistanis that the Gulf Cooperation Council states can not expel Pakistani guest workers or their "petro-countries would grind to a halt."

Hoodbhoy also takes on directly the issue of Saudi-Pakistani potential nuclear collusion, usually a subject off-limits in the media. The nuclear physicist reminds Saudis there are "no other nuclear vendors in town," and that "Pakistan is the only country that can at short notice potentially provide the kingdom with nuclear weapons or a nuclear umbrella" against Iran. His conclusion is that Pakistan should never give the kingdom the bomb.

Other commentators have been scathing about the role Saudi Arabia has played in backing extremist Islamic movements in Pakistan for the last 40 years. Much of the sectarian Sunni-Shiite violence in Pakistan is blamed on Saudi money. Before Yemen, this kind of commentary was rare in Pakistan; the Yemen war has made this rhetoric more frequent, and often satirical.

China has played a role in the drama as well. President Xi Jinping visited Islamabad last week and promised a staggering $46 billion in new investment in Pakistan to build an economic corridor linking western China to the Persian Gulf through Pakistan. China will expand the port of Gwadar in Baluchistan to rival Dubai or Doha as a regional economic hub under this ambitious strategy.

Pakistan has its own security challenges, of course. The Sharif brothers promised Xi that Pakistan will create a new special division of the Pakistani army to protect Chinese workers in Pakistan. The "Special Security Division" will total 10,000 troops and be commanded by a two-star general. Half the men will come from the Special Services Group, Pakistan's elite commando force. The force will have its own organic air support, i.e., troops for protecting China, albeit at home, but not for waging war in Yemen.

The Pakistanis sought assurances from the Chinese that their neutral policy in Yemen would not undercut their alliance with Beijing in any way. According to leaks from Pakistan, the Chinese were adamant that they understand Pakistan's hands-off approach in the Saudi-Iranian regional proxy war. Xi allegedly told Sharif that China will stand by Pakistan if its ties with Saudi Arabia and the United Arab Emirates unravel.

There are some in Pakistan pressing the Saudi cause. Among the most vocal is the political arm of the terror group Lashkar-e-Taiba (Jamaat-ud-Dawa), notorious for the attack on Mumbai in November 2008. Its leader, Hafiz Saeed, has called for Pakistan to send troops to defend the Two Holy Mosques in Mecca and Medina from the Houthis. He has formed a coalition of Sunni groups to defend the mosques from danger, claiming that Israel and the United States are using the Houthis and Iran to endanger the holy places. As early as March, Saeed blamed a "Jewish conspiracy" for fomenting the Houthi rebellion. Lashkar-e-Taiba raises funds in the kingdom, so it undoubtedly sees this propaganda as a good way to endear itself in the Gulf. Lashkar-e-Taiba has close connections to the Pakistani intelligence service, ISI, which is also very close to its Saudi counterpart.

The battle for Pakistan's support has revealed a degree of animosity toward the Gulf states in the world's second-largest Muslim country that has not been seen so vividly before. Given the huge investments Riyadh and Abu Dhabi have made over the decades in courting Pakistan and its politicians, it should lead to some soul-searching.