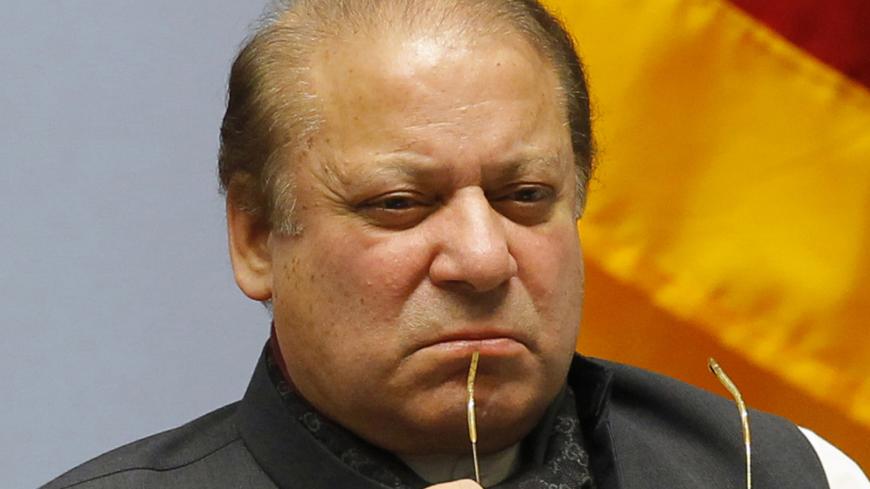 Pakistani Prime Minister Nawaz Sharif, who recently visited Saudi Arabia, appears to be thinking hard as he holds his glasses at the closing session of the 18th South Asian Association for Regional Cooperation summit in Katmandu, Nepal, Nov. 27, 2014. - REUTERS/Niranjan Shrestha

Saudi Arabia's campaign to build a broad Sunni alliance to contain Iran has apparently suffered at least a setback from Pakistan. Islamabad has opted, at least for now, to avoid becoming entangled in the sectarian cold war between Riyadh and Tehran.

Earlier this month, Pakistani Prime Minister Nawaz Sharif was invited to the kingdom for urgent talks with King Salman bin Abdul-Aziz Al Saud and his advisers. The king met Sharif at the airport to underscore the importance of the talks. The main topic was Iranian aggression in the Arab world and the impending deadline for the P5+1 negotiations on Iran's nuclear project. The king wanted firm assurances from Sharif that Pakistan would align itself with Saudi Arabia and its Sunni Arab allies against Iran, especially in the proxy war now underway in Yemen.

Salman specifically wanted a Pakistani military contingent to deploy to the kingdom to help defend the vulnerable southwest border with Zaydi Houthi-controlled north Yemen and serve as a trip-wire force to deter Iranian aggression. There is precedent for a Pakistani army expeditionary force in Saudi Arabia. After the Iranian Revolution, Pakistani dictator Mohammad Zia ul-Haq deployed an elite Pakistani armored brigade to the kingdom at King Fahd's request to deter any threats to the country. In all, some 40,000 Pakistanis served in the brigade over most of a decade. Today only some Pakistani advisers and experts serve in the kingdom.

According to Pakistani sources, Sharif has reluctantly decided not to send troops to Saudi Arabia for now. Sharif promised closer counterterrorism and military cooperation but no troops for the immediate future. Pakistan also declined to move its embassy in Yemen from Sanaa to Aden as the Saudis and the Gulf Cooperation Council states have done to distance themselves from the Houthis.

The Pakistanis are arguing their military is already overstretched facing the traditional enemy, India, and the increasing threat from the Pakistani Taliban. Pakistan has its own serious sectarian tensions and violence. About 20% of Pakistanis are Shiite and sectarian violence has been intensifying in recent years. Groups linked to al-Qaeda such as Lashkar-e-Jhangvi have targeted Shiite mosques and schools for suicide bombings. Iran also has proxies in Pakistan that have attacked Sunni targets in the past. Faced with these difficulties at home, Sharif is telling Salman not now for troops.

Sharif is by nature a cautious man and a very deliberate decision-maker. He is carefully leaving open the option of deploying troops to the kingdom in the future if the security situation gets worse. He will also be clear with the king that Pakistan remains a close Saudi ally. The ambiguous and mysterious Pakistani nuclear connection with Saudi Arabia will remain in the background.

The king has doubled down on his Egyptian connection this month. Crown Prince Muqrin pledged $4 billion in investment in Egypt at the Sharm el-Sheikh conference this week, and Kuwait and the United Arab Emirates each pledged the same. But Egypt, too, is reluctant to send troops, especially for operations around Yemen. Egyptians still have bitter memories of their disastrous intervention in Yemen in the 1960s. Ironically, the Egyptians then were fighting Saudi-backed Zaydi royalists.

So for now Saudi Defense Minister Prince Mohammed bin Salman, the king's son, will have to plan on dealing with Houthi threats on the border alone with Saudi troops. They have not fared well in past clashes with the Houthis.