Although the small force is officially there on a train-and-assist mission, the arrangement is reminiscent of a military practice from decades ago designed to protect the Saudi royal family from domestic and foreign threats. 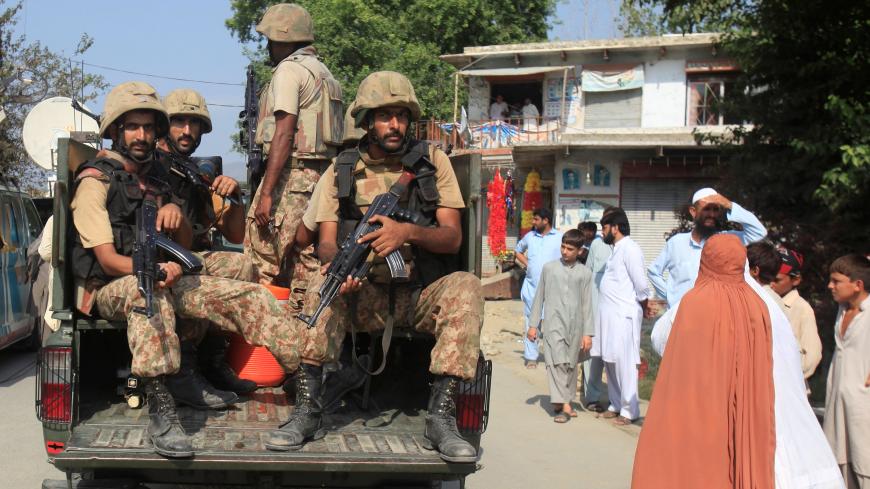 Saudi Crown Prince Mohammed bin Salman, often referred to by his initials MBS, is arranging the deployment of a Pakistani praetorian guard to the kingdom. Its size and purpose is unclear, but it is a revival of a military practice from the 1980s designed to protect the royal family from enemies at home and abroad.

The Pakistani military announced Feb. 15 that it would deploy a force to Saudi Arabia to assist and train Saudi forces. The Pakistani press is reporting that a composite brigade-size force will be sent. They will join 1,000 army trainers and advisers already in Saudi Arabia.

The announcement follows two trips this year to the kingdom by Pakistan Chief of Staff Gen. Qamar Javed Bajwa to meet with the crown prince, who is also defense minister and the main proponent of the deployment.

In 1982, Pakistani dictator Gen. Zia ul-Haq sent a reinforced armored brigade to Saudi Arabia at the request of King Fahd. The 12th Khaled bin Walid Independent Armored Brigade was stationed near Tabuk in northwest Saudi Arabia, but its principal purpose was to be an elite fighting force to defend the monarchy from any foe at home or abroad. The Saudis paid all of the expenses of this loyal palace guard, which remained in the kingdom for more than a decade. It was named after one of Prophet Muhammad’s greatest generals who defeated the Byzantine and Sassanian empires in the early expansion of Islam out of the Arabian Peninsula in the seventh century.

The Pakistani announcement made it clear that the new force will operate only inside the kingdom’s borders and not join the Saudi war in Yemen. Three years ago, King Salman bin Abdul-Aziz Al Saud and his son pressed the Pakistani leadership very hard to join the war, but Prime Minister Nawaz Sharif refused. The Pakistani parliament voted unanimously against sending troops to join the war as popular opinion was strongly opposed to joining the Saudi-led coalition fighting in Yemen.

Sharif was concerned that the Saudi war plans were hastily conceived and poorly thought through. He doubted they would achieve the “decisive storm” MBS promised. Worse, they would land Pakistan in the midst of a Sunni-Shiite sectarian conflict that would alienate Pakistani Shiites at home as well as its neighbor Iran. While the Saudis are currently making a few modest advances in Yemen against the Houthis, time has proven the wisdom of Sharif’s doubts. The war is an expensive stalemate with enormous humanitarian consequences, and over 95 Houthi missile attacks on the kingdom have underscored how dangerous the conflict is today.

The Pakistanis clearly do not want to be drawn into Saudi Arabia’s quarrels with its neighbors. For this deployment, Bajwa consulted in advance with the Turkish and Iranian ambassadors in Islamabad to inform them directly and assure both that the deployment was not a threat. Reportedly, he also secretly traveled to Doha to assure the Qatari emir that the Pakistani forces are not a danger to Qatar.

The mission of the new force is likely to remain somewhat ambiguous. The Saudis will not want to portray it as a hedge against any internal threat, and Pakistan is eager for it to have no regional dimension, so training is a safe cover.

It’s also unclear whether the contingent will be connected in any way to the multinational Islamic counterterrorism alliance that MBS has spearheaded in the kingdom. Notably, Iran is not a member of the alliance. Retired Pakistani Chief of Staff Gen. Raheel Sharif is its commander.

There is some opposition in the Pakistani legislature to the deployment, and the army leadership will be questioned about its purpose. One senator has argued that the deployment is a violation of the parliament's decision three years ago.

Pakistan and Saudi Arabia are longstanding allies. The disagreement over Yemen has been a rare disruption to the decades-old relationship and one both countries have sought to minimize. Sharif has traveled to the kingdom since he lost office last year to maintain his own longtime ties to the House of Saud. A carefully designed military presence in the kingdom is in Pakistan’s interest. For his part, the king is joining his predecessors in getting a Pakistani insurance policy.