Why Israel will warmly welcome Mattis

Defense Minister Avigdor Liberman and Secretary of Defense James Mattis are expected to discuss the threat of Iran's presence in Syria at a time when Israel is pleased with the United States' involvement in the region. 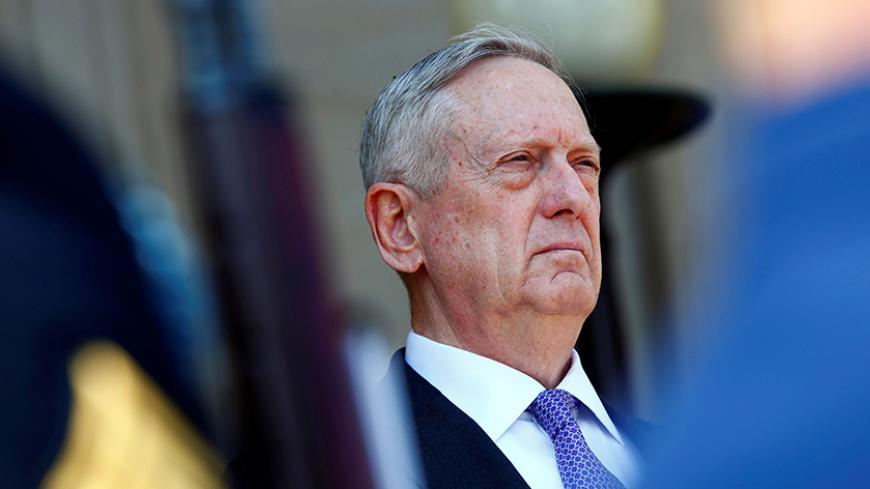 US Defense Secretary James Mattis, seen here at the Pentagon in Arlington, Virginia, on April 13, 2017, will likely hear a lot about Iran during his visit to Israel April 20-21. - REUTERS/Eric Thayer

Israel sees the April 20-21 visit of Defense Secretary James Mattis as a critical milestone in shaping the new relationship between the Trump administration and the Netanyahu government.

The most important "safety instruction" being distributed to all senior officials in Israel on the eve of Mattis' visit is that under no circumstances should they use the moniker "Mad Dog," which Mattis has carried with him since his days in the Marines. One senior Israeli defense source told Al-Monitor this week on condition of anonymity, "The region all around us is full of 'mad dogs,' who are uncontrollable and unpredictable. Mattis represents those forces trying to bring stability to the chaos and restore America's role as the responsible adult and regional sheriff in the Middle East."

"Mattis is the most powerful person in the Trump administration," one senior Cabinet minister told Al-Monitor April 19 on condition of anonymity. "He has an absolute consensus surrounding him. His appointment was approved by 98 out of 100 senators." He is a real general, who also happens to be an intellectual, very well versed in Middle Eastern affairs ever since his days as commander of CENTCOM [US Central Command in Tampa, Florida]."

Though Mattis will inevitably be meeting with Prime Minister Benjamin Netanyahu, he will be the official guest of his colleague, Defense Minister  Avigdor Liberman. This will be the third meeting between Mattis and Liberman in as many months. One Israeli participant in some of these meetings, speaking on condition of anonymity, said there is a "rare chemistry" between the two men. In conversations with his associates, Liberman has nothing but compliments for the new US secretary of defense. At their March 7 meeting in Washington, Mattis and Liberman were supposed to meet in private for just 15 minutes, yet the meeting lasted almost an hour, until Mattis' chief aide was forced to intervene.

During his briefings with Liberman, Mattis will also meet with Chief of Staff Lt. Gen. Gadi Eizenkot. There will, however, also be a surprising meeting between Mattis and another Israeli military leader, Maj. Gen. Tal Russo, who retired from the Israel Defense Forces (IDF) but was called back to duty as the (reserve) commander of the Depth Corps. This command is responsible for long-range operations within enemy territory by IDF special forces. In other words, the corps' focus is on Iran and other distant fronts.

It turns out that the US defense secretary and Russo are old friends from 2007, when Mattis was appointed to lead the US Joint Forces Command in Norfolk, Virginia. Russo was the IDF's chief of operations at the time, and the two men developed an especially close working relationship. At the time, the United States invested considerable efforts in learning about various means of fighting terrorism, asymmetrical conflict and contending with terrorist groups that situate themselves within civilian populations. As always, the Americans found a broad base in Israel from which they could learn. It is believed that this week's meeting between the two men will involve the discussion of Russo's responsibilities for Israel's strategic depth — in other words, the space between Tehran, Baghdad and Damascus, and as far as Beirut.

As a backdrop to this visit, Jerusalem is deliberating over how to respond to a rather intricate dilemma. Should Israel press the United States to increase its involvement in the war in Syria or instead suggest that the United States take it down a notch? Underlying this is the Israeli assessment that as tensions between the United States and Russia intensify over the conflict in Syria, Russia will limit the freedom of action it affords to Israel and its air force in Syria and Lebanon.

"It's the rules of the jungle," one senior Israeli military source told Al-Monitor on condition of anonymity. "There's a distinct food chain here, with the Russians at the apex and us immediately beneath them. If the Americans join the party and push the Russians into second place, they [the Russians] could vent their frustrations on us." The situation is complicated, volatile and utterly unpredictable. "Anything can happen at any given moment," another senior Israeli security official told Al-Monitor on condition of anonymity in a recent briefing. "We must continue to act with extreme caution."

Israel's greatest concern overall right now is what will happen in Syria on "the day after." During his upcoming visit, Mattis will see and receive security briefings on Iranian efforts to establish a seaport in Syria and a new front against Israel in the Golan Heights, manned by the Islamic Revolutionary Guard Corps and Hezbollah. He will hear how Iran is continuing to arm Lebanon's Hezbollah at an accelerated pace and even helping to create factories for the local manufacture of missiles and rockets by Hezbollah. This would reduce Hezbollah Secretary-General Hassan Nasrallah's reliance on receiving weapons from afar, along supply routes vulnerable to Israeli attacks.

Israel's strategic objective is to prevent greater Iranian involvement in the region at almost any cost, and to keep Iran from approaching Israel's border fences. Mattis will hear about Syrian President Bashar al-Assad's residual chemical weapons capacities and the ongoing propagation of terror by Iran, while Mattis' Israeli hosts will also plead with the US defense secretary to keep Egyptian President Abdel Fattah al-Sisi afloat no matter what it takes. One of Israel's other strategic allies, King Abdullah II of Jordan, is also a priority, but in the case of Jordan, the cost is relatively small change.

"Maintaining stability in Egypt is not just in the strategic interest of Syria, Israel or the West. It is in the interest of anyone concerned about the continuing chaos in the Middle East," the same security source told Al-Monitor.

A report released one day before the US defense secretary's arrival claims that the United States confirmed that Iran is keeping its part in the nuclear agreement with the world powers, but in the same breath adds that the United States is still considering the renewal of sanctions against the Islamic Republic. Israel was particularly pleased to hear this. Netanyahu and his ministers have been working ceaselessly to convince the United States of the magnitude of its previous administration's errors in dealing with Iran. As of now, this isn't even about the nuclear issue. The problem, as Israel sees it, is that by ignoring the conventional front, President Barack Obama gave Iran a "license to kill," effectively turning it into the most influential regional power in the Middle East.

After all the debates and deliberations, the balance reached by Israeli security experts is in perfect accord with the US announcement April 19. As long as Iran continues to observe the terms of the nuclear agreement, there is no reason to rescind it. At the same time, however, as long as Iran continues to propagate terror, overthrow regimes and destabilize the Middle East, there is no reason to lift sanctions. It is unclear whether this will be the Trump administration's policy, but so far, Washington has shown a positive tendency in this direction. Jerusalem hopes that the defense secretary's visit will reinforce this trend.