Chairman of the US Joint Chiefs of Staff Gen. Joseph Dunford visited Israel and met with his counterparts there to discuss the Islamic State and the effects of the Syrian war on Jordan. 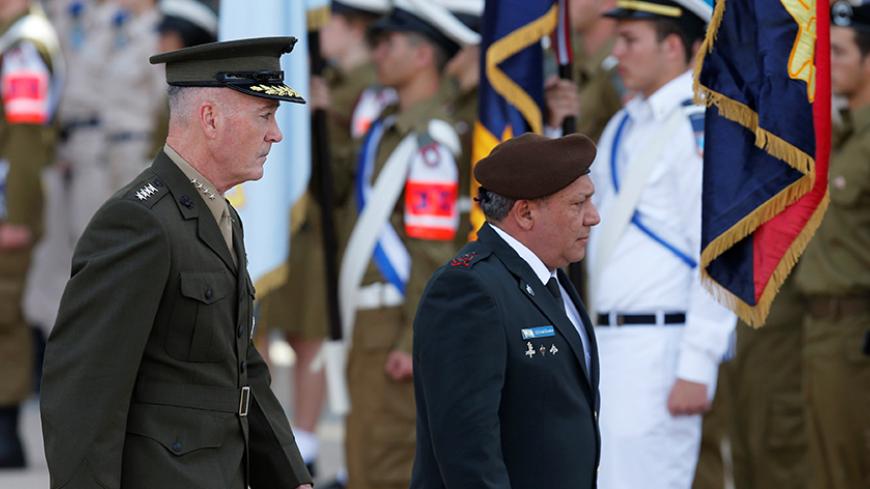 Gen. Joseph Dunford (L), the chairman of the US Joint Chiefs of Staff, walks next to Israel's chief of staff, Lt. Gen. Gadi Eizenkot, as they review an honor guard in Tel Aviv, Israel, May 9, 2017. - REUTERS/Nir Elias

A little less than two weeks before US President Donald Trump's scheduled visit to Israel, the chairman of the US Joint Chiefs of Staff, Gen. Joseph Dunford, landed in the country. It was the third visit of "Fighting Joe" to the country since becoming chairman in the fall of 2015. On May 9, he met with his Israeli counterpart, Lt. Gen. Gadi Eizenkot, followed by meetings with Prime Minister Benjamin Netanyahu, Defense Minister Avigdor Liberman and four Israeli generals, each representing a different military branch: Chief of Operations Maj. Gen. Nitzan Alon; Chief of Planning Maj. Gen. Amikam Norkin; the commander of the air force, Maj. Gen. Amir Eshel; and Chief of Manpower Maj. Gen. Moti Almoz.

Many issues were on Dunford's agenda during this visit to Israel, though his main task was to prepare for the arrival of the US commander in chief. Numerous sources in Tel Aviv and Jerusalem, as well as Western diplomatic representatives in Israel, concur that the "burning issue" for the United States is the stability of the Kingdom of Jordan, considering all the problems accumulating along its northeastern border, especially with Syria and Iraq.

Two days before Dunford's arrival in Israel, a major international military exercise called "Eager Lion" began in Jordan. Headed by the United States, it involves 20 countries. Thousands of soldiers take part in this annual exercise, but this year, it has been the subject of particular interest — and the cause of particular concern — especially for Damascus. Reports making the rounds in Syria claim that the exercise will provide cover for a military invasion of Syrian territory, in an attempt to destroy Islamic State (IS) forces and ease the heavy pressure on Jordan's northern border. This would not be an attempt to occupy Syrian territory, but rather a military action in Syrian territory intended to continue breaking IS' military strength. The target would be areas surrounding the Syrian town of Daraa that are still controlled by IS.

Events in the border areas adjacent to Jordan are very disturbing to the Hashemite kingdom and contribute to a sense of internal instability. Jordan is being flooded by Syrian refugees and has a hard time dealing with the new situation. It feels threatened by the continuation of skirmishes between the various rebel factions and the Shiite axis. Amman's nightmare scenario is that the Syrian civil war spills into the kingdom and that IS attempts to find greener pastures in Jordanian territory after the Islamic militant group is pushed out of Syria and Iraq.

An earlier article in Al-Monitor reported that a branch of IS in the southern Golan doubled its territory over the past few months. The United States, like Israel, considers the stability of Jordan to be a first-rank strategic concern. It was not by chance that King Abdullah was one of the first world leaders to visit the Trump White House. Israel plays a major, albeit completely secretive, role in this power game. The assessment is that Dunford will exert quite a bit of energy on this topic during his talks in Israel.

In their talks with Dunford, his Israeli counterparts focused on the Syrian civil war, especially on "the day after." Once again, Israel emphasized to Dunford that it would not agree to any change to the status quo and the balance of power in Syria or its airspace. The Israelis asked the Americans for help in obtaining recognition that the no-fly zones, which were recently created, do not infringe on Israel's right to continue combating the transfer of weapons from Syria to Hezbollah. Similarly, any Iranian or Hezbollah presence in the Golan is deemed by Israel to be a casus belli. As far as is known, the Americans reconfirmed their support for these Israeli interests.

It was surprising to learn that the second most important issue to Dunford is the Palestinian issue. "The Americans have mastered the issue and know the situation on the ground intimately," a senior Israeli military official told Al-Monitor on condition of anonymity. "It was clear how important the Palestinian issue is to the administration. The talks with Dunford confirmed Jerusalem's current, long-standing assessment that President Trump is serious and determined to try and reach a viable arrangement of the Palestinian-Israeli issue."

A considerable time during the meetings was devoted to providing Dunford with high-quality Israeli intelligence on all of the regional strategic issues. As one senior Israeli source told Al-Monitor on condition of anonymity, "When it comes to intelligence, Israel continues to be a valuable asset for the Americans. We have information that no one else has, and we share it with our ally, fully cooperating with them." The public agenda of Dunford's visit to Israel did not include a meeting with Mossad chief Yossi Cohen or Chief of Military Intelligence Maj. Gen. Herzl Halevi, but it is reasonable to assume that meetings with them also took place.

Between all his talks and meetings, Dunford found time to go north, to the village of Migdal, with Almoz, the major general who is chief of manpower. Dunford's predecessor, Gen. Martin Dempsey, received the same treatment. Christians believe that Mary Magdalene was born in Migdal, and Almoz owns extensive olive orchards in the village, which Christians consider to be the cradle of their religion. Like Dempsey, Dunford will receive a bottle of olive oil from Migdal's ancient trees and visit sites sacred to Christians around the Sea of Galilee, including the site of Christ's baptism.

The village of Migdal sits above the banks of the Sea of Galilee. Its elevated position offers one of the most beautiful views in Israel, but as he stood there, Dunford must have received a strategic briefing, too. The Sea of Galilee is Israel's only freshwater reservoir, and the dispute over its waters has kept the country from reaching a peace agreement with Syria on more than one occasion. Israeli air force jets fly over the Sea of Galilee on their bombing runs in Syria, according to foreign sources. Nevertheless, the Golan Heights, which lies along the east bank of the Sea of Galilee, continue to be an island of tranquility in the chaos of Syria's devastating civil war, except when a mortar or tank shell from the fighting in Syria spills over the border, disrupting the quiet (and evoking an immediate Israeli response). Dunford will have a clear view of hell while standing in the middle of paradise.