Secretary of Defense Jim Mattis announced his resignation the day after President Donald Trump decided to pull US troops out of Syria. 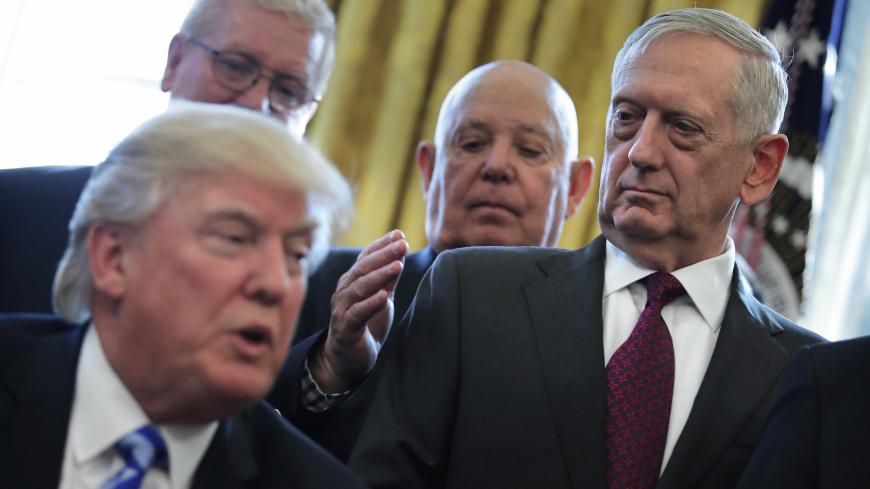 Defense Secretary James Mattis looks at President Donald Trump as he speaks during a meeting with Medal of Honor recipients in the Oval Office of the White House in Washington, March 24, 2017. - REUTERS/Carlos Barria

His resignation, effective at the end of February, removes one of the last remaining senior officials in the US administration with long-held foreign policy experience in the Middle East and elsewhere.

The commander-in-chief said in a tweet that Mattis planned to retire “with distinction” after a replacement had been selected. But in stepping down from his post, Mattis made clear that he could no longer effectively advocate for Trump’s views, after the two men privately clashed for months over the US troop presence in Syria and Afghanistan and US support for the NATO alliance.

“My views on treating allies with respect and also being clear-eyed about both malign actors and strategic competitors are strongly held and informed by over four decades of immersion in these issues,” Mattis wrote. “You have the right to have a secretary of Defense with views that are better aligned with yours.”

Behind the scenes, the retired Marine Corps general spent months trying to convince Trump to keep a contingent of US troops and special forces in Syria to train and advise Kurdish units to fight the Islamic State.

Trump unveiled Mattis’ appointment at a rally in 2016, affectionately calling his pick “Mad Dog” and lauding his combat credentials in Iraq and Afghanistan. But the partnership was immediately marred by significant philosophical differences, chief among them Trump’s concern that US military allies were taking advantage of Washington’s arsenal. Meanwhile, Mattis often encouraged working through partners, spending months reassuring US allies of long-standing military commitments amid Twitter rejoinders from Trump.

Mattis directly referenced NATO’s invocation of its self defense mandate after the Sept. 11, 2001, attacks as well as the international coalition against the Islamic State as examples of allies contributing to US national security interests in the Middle East and elsewhere.

Mattis’ letter, which caught officials in the Pentagon by surprise, appeared to be a direct rebuke of Trump’s conduct of foreign policy. In a series of early morning tweets on Thursday, the president questioned whether the United States should seek to be the “policeman” of the world. “Do we want to be there forever? Time for others to finally fight,” Trump wrote.

“Like you, I have said from the beginning that the armed forces of the United States should not be the policeman of the world,” Mattis argued. “Instead, we must use all the tools of American power to provide for the common defense.”

Mattis indicated he will depart his post on Feb. 28. Sen. Tom Cotton, R-Ark., and Gen. Jack Keane have been among the names rumored for the post. Keane however took himself out of the running in an interview on Fox News on Thursday.