Ankara not backing down from Iraq intervention

A week after announcing an end to operations in Syria, Turkey announced that it plans to launch a military operation in Iraq against the Kurdistan Workers Party (PKK) in Sinjar, a move guaranteed to outrage the Baghdad government. 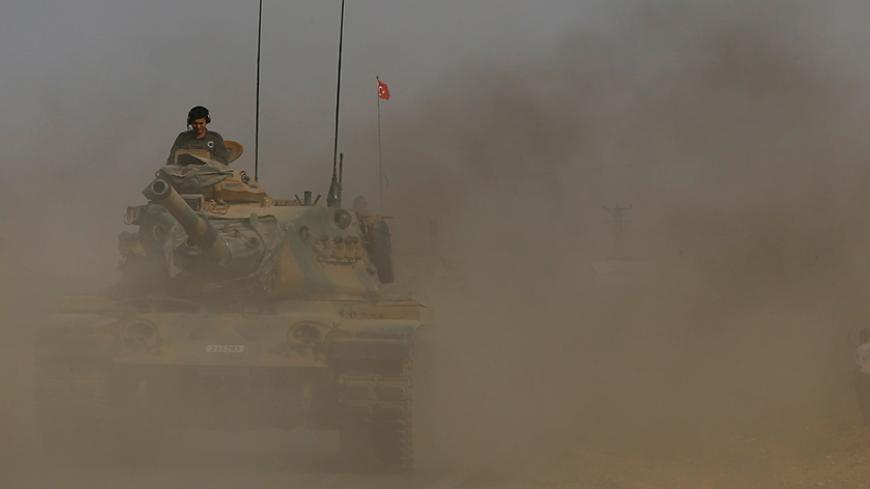 Having announced the end of Operation Euphrates Shield in Syria on March 29, Turkish President Recep Tayyip Erdogan shortly thereafter declared a pending new stage of the operation, but on Iraqi soil. Any such operation is expected to exacerbate the myriad conflicts in the area.

Erdogan announced the new operation in an April 4 television interview with the Anadolu Agency. Identifying Turkey's targets, he said, “There are the Tal Afar and Sinjar situations. We also have kin in Mosul.” The “kin” Erdogan referred to are Turkmens. During an April 7 TV interview, Foreign Minister Mevlut Cavusoglu confirmed the government's plans for an Iraq campaign and explained Sinjar's importance. “The PKK [Kurdistan Workers Party] wants to build its own camp in Sinjar, which we cannot allow,” he said. “We will undertake a [military] intervention, or they [PKK forces] will cross our borders to launch terrorist attacks.” No time frame has been publicly announced for the Iraq operation.

PKK forces entered Sinjar in 2014, after Islamic State militants attacked the area, which is inhabited primarily by Yazidis. The heavy presence of PKK forces in the area has caused disputes among Kurdish factions. In March, bloody clashes erupted between the PKK-affiliated Sinjar Resistance Units (YBS) and the Rojava peshmerga affiliated with the Kurdistan Democratic Party (KDP) and supported by Ankara. The PKK sees the clashes as being related to a visit to Turkey by KDP leader and Iraqi Kurdistan Regional Government President Massoud Barzani. Meanwhile, the KDP has accused Iran of supporting the YBS as part of its Shiite Crescent project.

Turkey already has military forces in Iraq, at Bashiqa, a situation that has caused tensions with Baghdad. Turkey claims the troops are there merely to help train fighters in prepartion for taking Mosul from IS. Baghdad claims they are violating Iraqi sovereignty and has called for their withdrawal. It appears that Turkey would need a comprehensive military invasion to drive the PKK from the Sinjar area, as airstrikes alone, which Turkey has conducted in the Qandil mountains against PKK targets, are unlikely to achieve Ankara's announced goal. It is possible that Turkey might use its forces in the Bashiqa camp to help do so.

The Bashiqa camp has been hemmed in to the south by Baghdad-controlled joint forces, as ordered by Iraqi Prime Minister Haider al-Abadi, so the only way for Turkish forces in Iraq to reach Sinjar by land is to pass through areas controlled by the KDP. Would the KDP allow a foreign force to cross that territory to attack another Kurdish force?

Rabwar Fattah, director of the London-based Middle East Consultancy Service, told Al-Monitor in a phone interview, “This step would be met with strong objection by the Kurdish people in the region. However, the KDP leadership does not have many options, so if Turkey decides to take this step, the step will be taken regardless of what the leadership thinks.”

In fact, however, the central government in Baghdad also does not have many options if Turkey decides to launch a ground offensive in Sinjar. Opting for a direct military confrontation is unlikely, because Iraqi forces have their hands full fighting IS, and Turkey has the advantage of superior air power.

The diplomatic option does not appear to offer much either, as Baghdad has repeatedly requested that Turkey withdraw its forces from Iraqi territory. The Iraqis have requested backing for its position from international and regional organizations, including the UN Security Council and the Arab League, but in vain.

Further complicating the picture, Ankara has accused Iran of using the PKK forces in Sinjar to secure a corridor from Iran to the Mediterranean. “When we look at it all, there is a broad influence for Iranian and Persian nationalism based on sects in Iraq,” Erdogan said in the Anadolu interview, expressing dissatisfaction with Iran’s role in Iraq.

The Turkish-Iranian conflict has recently taken a new turn, with armed Iraqi Shiite factions affiliated with Iran threatening to attack the Turkish forces in Iraq. Turkish military operations in Iraq would make such a confrontation more likely. Moreover, any Turkish military advantage would not safeguard its forces against painful military strikes, as the Shiite factions have the expertise and support to strike Turkish forces as they did US forces when they occupied the country.

“Tehran will not accept further Turkish military intervention in Iraq,” Afshin Shahi, senior lecturer in international relations and Middle East politics at Bradford University, told Al-Monitor. “Such military operations, if conducted, will transform the Iraqi situation into something similar to Syria, as it is likely to lead to proxy clashes in Iraq between Iran and Turkey.”

Indeed, should Ankara follow through with “Euphrates Shield Iraq,” it appears almost certain that it would ignite military escalation beyond its immediate targets and exacerbate the battle between allied blocs in Iraq and perhaps the region.