KRG President Massoud Barzani's most recent visit to Turkey left the public at odds over the hoisting of the KRG flag. 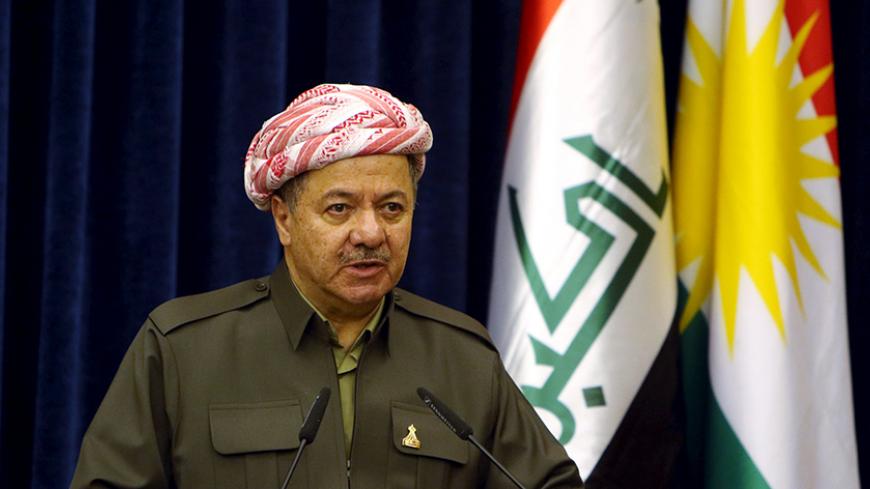 DIYARBAKIR, Turkey — The site of the Kurdish flag prominently waving over a Turkish airport recently evoked much the same reaction as a matador's cape taunting a bull.

On Feb. 26, Massoud Barzani, president of the Kurdistan Regional Government (KRG), and his entourage arrived at Istanbul Ataturk Airport. Barzani has visited Turkey numerous times since the inception of the KRG, Iraq's only autonomous region. Some people have welcomed him, some have not, but there has not been a sustained, bitter debate until now.

For the first time, the KRG flag was raised alongside the Iraqi flag at the airport reception and also at Barzani's meeting with Turkish Prime Minister Binali Yildirim. Although Yildirim defended the flag's presence, a bellicose dispute erupted. Interestingly, the KRG flag was not displayed at Barzani’s meeting with President Recep Tayyip Erdogan.

Although they don’t have a state, Kurds treat this flag as the symbol of a state. First flown in 1920 by those seeking an independent Kurdistan, it became the official flag of the region after Kurdish autonomy was recognized. Many Kurdish organizations in Iran, Iraq and Turkey use the flag.

For many years, the flag was a primary source of friction between Iraqi Kurds and Turkey, which strongly opposed the flags flown in Iraq in the 1990s. Vehicles that carried KRG flag stickers were not allowed to cross into Turkey. The problem eventually was forgotten, however, as relations began to normalize between Turkey and the KRG. Kurdish flags became visible everywhere, especially on T-shirts. Although the Kurdistan Workers Party (PKK) did not adopt the flag, its ranks use it widely.

Even fervent anti-Kurdish Turkish nationalists had learned to live with it.

But after Barzani’s latest visit, this warm atmosphere was replaced by an ill-tempered mood when many nationalists, including writers, artists, journalists and academics, negatively reacted to the hoisting of the flag. Yilmaz Ozdil and Emin Colasan, writers for Turkey's Daily Sozcu, were particularly irritated that the flag was flown.

Kurds, disappointed to see names they respected joining the anti-flag chorus, responded with equally venomous articles. They were furious that Colasan maliciously insulted Barzani in his article. Several individuals and organizations are now suing the writer.

Ali Bayram, a lawyer in Sirnak, lodged the first court complaint. A copy of the complaint obtained by Al-Monitor accuses Colasan of insulting Kurds as a whole in the person of Barzani.

“I request a public case to be opened against Colasan, who denigrated the Kurds and openly provoked the people to hatred and animosity. In his article, titled ‘This vile person is again in Turkey,’ the writer used despicable language to insult the dignity of Kurdish people living in Turkey," the official complaint said. Kurds particularly objected to Colasan's reference to “this hoodlum named Barzani."

Diyarbakir Bar Association also lodged a complaint with the public prosecutor and asked for a court case against Colasan on charges of “provoking the people to hatred and enmity.”

Mesut Tek, the leader of one of the oldest political parties in southeastern Turkey, the Socialist Party of Kurdistan, also lodged a complaint requesting that Colasan be tried on charges of “insult, a crime of hatred and rejecting personal rights.”

Political bodies outside the PKK, such as the Yazidi Movement, Kurdistan Freedom Party and North Kurdistan Democratic Party, issued a joint statement supporting Barzani. “Everyone should know that they will have to confront us any time they take such vile actions against Kurdish national leaders and the flag of Kurdistan,” the statement, a copy of which was sent to Al-Monitor, said.

Lawyer Sedat Yurtdas, a member of the executive board of the Dicle Social Research Center, said hoisting the KRG flag in Turkey reflects both parties' need for each other.

“Turkey cannot do without the Kurds," Yurtdas told Al-Monitor. "The production and marketing of oil determine the relations between the KRG and Turkey. They even talk of joint policies, even military policies. This is indispensable for Turkey to be economically and politically a leading actor in the Middle East. The [Justice and Development Party] AKP has to acknowledge that it can’t rebuild Turkey without giving the Kurds the space they deserve. Arresting parliamentarians, removing mayors, mass detentions and purely security-oriented policies will not help solve the Kurdish issue.”

Yurtdas said reactions to the Kurdish flag had actually united a vast majority of the Kurds. “They can criticize Barzani in their internal relations. But [negative] reactions to flying the Kurdish flag on the occasion of Barzani’s travels cannot be accepted. Turkey has to abandon the nationalist, racist and chauvinist lexicon it uses. Today’s Kurds are not yesterday’s Kurds,” he added.

Turkey's pro-Kurdish Peoples’ Democratic Party’s response was a short one. Spokesman Osman Baydemir said hoisting the flag is a tradition, a custom. “The flag belongs to all Kurds,” Baydemir said.

It is not possible to predict the outcome of the judicial process. But no doubt, the Kurds, who were already angry with recent developments in Syria, were offended again with the flag dispute.