Does Erdogan need Ocalan to be elected president? 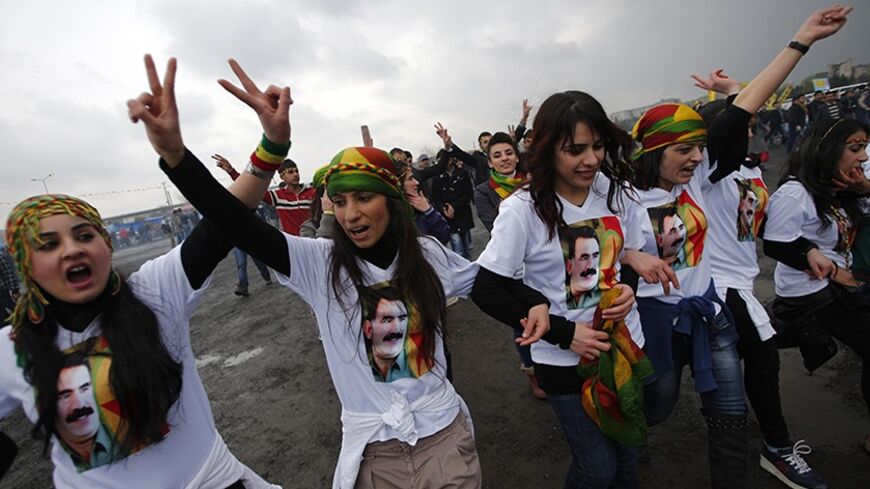 Demonstrators wearing T-shirts with a picture of imprisoned PKK leader Abdullah Ocalan gesture during a rally to celebrate the spring festival of Nowruz in Istanbul, March 17, 2013. - REUTERS/Murad Sezer

The city of Diyarbakir is not only the largest metropolis of Turkey’s southeast. More importantly it is the center, a kind of “spiritual capital,” of the Kurds, who are called “the largest nation of the world without a state,” scattered over Turkey, Iran, Iraq and Syria.

There is an elected Kurdistan parliament. Even during the reign of Saddam Hussein, after 1974 Erbil was the center of autonomous Kurdistan. The town of Sulaimaniyah has always been recognized as the “cultural center” of Kurdistan. Adding Kirkuk to the KRG’s domain is Iraq’s seemingly insurmountable Kurdish problem and a most burning issue. But none of these cities could replace Diyarbakir, which in every Kurd’s perception is their capital, morally and politically.

This characteristic of Diyarbakir has been tacitly recognized even by the Turks, who are usually most extreme in rejecting Kurdish identity. A former prime minister, Mesut Yilmaz, once said: “For Turkey, the route to the European Union passes through Diyarbakir.” That sentence became the motto of Turkey’s Kurdish issue in the beginning of the 2000s. It also added to the dignity of the people of Diyarbakir.

All Turkish political leaders have chosen Diyarbakir to start new initiatives on the Kurdish issue, to announce a new approach and to offer a historic gesture. For example, in 1991, Suleyman Demirel, when he returned to political life after a long hiatus of political bans, made his historic declaration, “We recognize the Kurdish reality” in Diyarbakir before a large crowd.

It was also interesting that Prime Minister Recep Tayyip Erdogan in 2005 chose Diyarbakir to openly discuss the Kurdish issue and to say that the state might have to apologize to the Kurds because of mistakes that had been made.

It was also noteworthy that in every election campaign, Erdogan designated Diyarbakir for his key mass rally, where he would issue political messages. The latest such move was in November 2013, when Erdogan met with KRG President Massoud Barzani in Diyarbakir. The city was adorned with Turkish and KRG flags recognized as the flag of Kurdistan. Barzani addressed the crowd in Kurdish standing next to Erdogan and Erdogan for the first time ever pronounced the word “Kurdistan.”

For more than 15 years, Diyarbakir has been a city governed by parties considered to be pro-Kurdistan Workers Party (PKK). The candidates of political parties, which are constantly being closed down on grounds of being affiliated with the PKK, immediately get organized under new names and participate in elections. They have generally won elections in Diyarbakir with overwhelming majorities and have enabled pro-PKK elements to govern the local administration.

For at least 10 years, every weekend Diyarbakir has been the scene of cultural and political panels and symposiums. The people of Diyarbakir boast that they are the “most politicized city” in the entire world.

The city also has “religious significance” because many of the companions of the Prophet Muhammad are buried there. Although it is the most secular urban center of Turkey, which attracts notice especially during the holy month of Ramadan, its religiosity cannot be ignored. Kurds in general are known as pious people, hence the high level of piety in Diyarbakir.

That is why many might think that there was nothing unusual about holding a large meeting attended by hundreds of delegates from many countries under the banner of the Democratic Islam Congress. But this meeting was convened with the words of PKK leader Abdullah Ocalan, who is serving a life sentence in an island prison of Turkey. Ocalan sent a striking message that began, “My believer brothers,” and opened the congress.

The congress ended after two days by referring to the Medina Act, which Muhammad formulated to regulate cohabitation and coexistence with non-Muslims in the town of Medina, which was the site of the first-ever Muslim administration. The concluding communique of the congress was very much an updated Medina Act.

Ocalan, once described as a “Marxist-Leninist outlaw” who began an armed struggle and consequently was labeled a terrorist by the Turkish state because he was leading the armed insurgency of Kurdish nationalism, organized this Islamic congress for the Kurds with the knowledge and even with tacit approval of the Turkish government. His message was the opening address. No matter which way the Kurdish issue moves, we may now predict that historians will record the May 10-11 Democratic Islam Congress of Diyarbakir as a milestone for the Kurds.

In his message to the congress, Ocalan mocked Erdogan’s famous dictum of “One nation, one state and one flag” that he borrowed from Turkish nationalists as “nonsense.” That was Erdogan’s way to emphasize his dedication to the “unitary state.” Ocalan went on to criticize the Iranian regime by calling it “Persian-Islam synthesis” and the ideological base of Turkey’s regime by calling it a “Turk-Islam synthesis.” He introduced a different “Islamic unity for the Kurds” by making references to the Quran. This could well be the “new Kurdish political lexicon.”

With this new language, Ocalan might be thinking of pulling the rug from under the feet of KRG President Massoud Barzani, who is his conservative rival in the Kurdish political arena and who has become the closest ally of Erdogan.

Of course, all this is speculation. But to predict that Ocalan’s desire to link with Islam will have region-wide repercussions is not speculation.

The PKK’s and Ocalan’s archenemy Turkish nationalists seem unimpressed — but rather alarmed. This sentiment was strikingly expressed in an article written by Ozcan Yeniceri, a parliament member of the Nationalist Action Party (MHP) and a party spokesman, in the ultra-nationalist daily Yenicag. He said Ocalan, with his new strategy, is trying to utilize Islam as a new instrument against the Turkish state. He also criticized Erdogan and said Erdogan needs Ocalan to be elected president. He wrote:

“Erdogan definitely needs Ocalan’s support to be elected president. That is why he doesn’t feel strong enough to respond to Ocalan and separatists who are challenging him.”

That Erdogan needs Ocalan to be elected president has in the meantime become the “talk of the town” in Turkey.

Turkey’s peculiar internal dynamics appear likely to pave the way for many unprecedented and unusual developments in the days to come.

A “Democratic Islam Congress” in Diyarbakır was one of them. It will not be the last.