Denise Natali writes that the withdrawal of Kurdistan Workers Party (PKK) forces from Turkey and developments in Syria will keep the Kurdish nationalist movement fragmented from within and across borders. 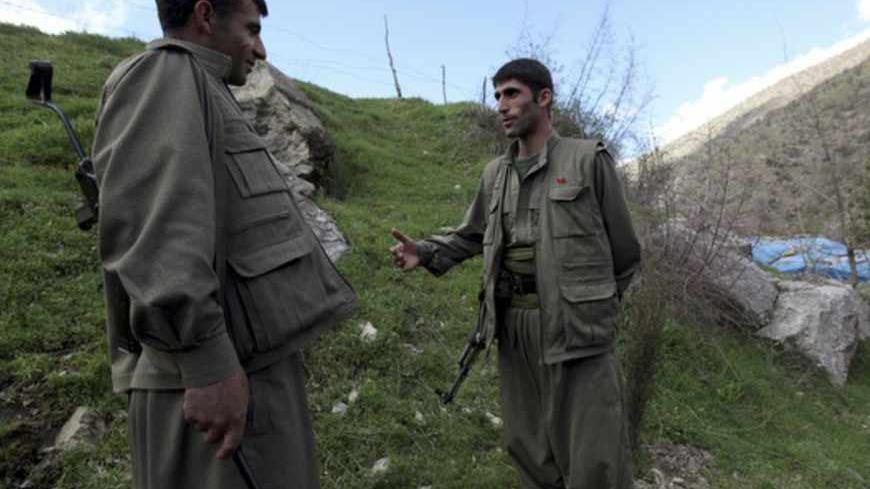 Kurdistan Workers Party (PKK) fighters talk to each other as they stand guard at the Kandil mountains near the Iraq-Turkish border in Sulaimaniya, 330 km (205 miles) northeast of Baghdad March 24, 2013. - REUTERS/Azad Lashkari

While Abdullah Ocalan, leader of the Kurdistan Workers Party (PKK) pursues the cease-fire plan with Turkish Prime Minister Recep Tayyip Erdogan, the PKK is also involved in a subtle power struggle across Turkey’s borders. This struggle is being played out by the PKK’s efforts to check the influence of Massoud Barzani, president of the Kurdistan Region of Iraq, over leadership of the Kurds. By engaging in the Kurdistan Region’s messy pre-election politics and supporting the opposition Change Movement (Goran), the PKK is attempting to stifle a third mandate for Barzani, while stirring local criticism of the Kurdistan Regional Government (KRG). These PKK interventions are unlikely to alter the status quo in the region — at least for the forthcoming elections — however; they are fueling political fragmentation and creating additional challenges to regional stability.

Indeed, rivalries between the PKK and Barzani’s Kurdistan Democratic Party (KDP) are nothing new. During the Iraqi Kurdish civil war of the 1990s, the PKK and KDP engaged in armed conflict against each other, as well as the KDP against the Patriotic Union of Kurdistan (PUK). The Ocalan-Barzani competition re-emerged after the Syrian civil war broke out, and as different Syrian Kurdish groups backed by the PKK and its affiliate, the Democratic Union Party (PYD) vied for power with the KDP-supported Kurdish National Council. This rivalry continues with Barzani tied to Turkey and attempting to court Syrian Kurdish youth groups and independents away from PYD influence.

Still, Barzani and Ocalan reached a tacit agreement after Ocalan’s imprisonment in 1999, which allowed the PKK to relocate in the Kandil Mountains in the Kurdistan Region of Iraq. The KRG also tolerates the presence of thousands of PKK supporters in the Makhmour Camp, where they have been residing since 1994 as political refugees. Moreover, despite the rapprochement between Erbil and Ankara, Barzani has affirmed that “the period of Kurds killing Kurds is over” and that the KRG Peshmerga would not engage militarily against the PKK or any other Kurdish group. These efforts have led to a mutually peaceful coexistence between the KDP and PKK, despite the distinctly different ideologies and regional relationships each has developed, particularly with Ankara.

The last six months, however, have seen a shift in PKK tactics inside the Kurdistan Region of Iraq. Whereas the PKK leader in Kandil, Murat Karaliyan, had previously indicated his willingness to work with Barzani in 2009, he now opposes electing him to a third term as president. The PKK is using its networks and social media to incite local opposition against Barzani and the Iraqi Kurdish parties. For instance, it is encouraging local populations in the Iraqi Kurdish-Iranian border town of Halabja to criticize the KRG and Barzani for lack of services. One of the PKK websites has inflammatory photos and remarks about Barzani's leadership, as well as other KRG political party leaders.

This shift reflects a reaction to Barzani’s growing power — including his close ties to Erdogan — and his claims or ambitions to become a leader of all the Kurds, expressed in Kurdish as “president of Kurdistan,” which the PKK rejects. More specifically, the PKK shift coincides with the illness of Jalal Talabani, president of Iraq and leader of the PUK, which has further weakened the PUK and limited any serious competition for the KDP and Barzani's power. In fact, the rump of the PUK — known as the "Gang of Four" — may have called for a separate list in the planned September elections to reflect its differences and attempts to challenge the KDP. Yet the PUK leadership continues to support and depend upon Barzani as president, particularly as a financial patron.

This is why the PKK is now calling for a “Kurdistan supported by Goran.” Goran remains the only secular Kurdish nationalist party that seeks to remove Barzani from office while pressing for a parliamentary and not presidential system for the region. Goran also has indicated its support for the PKK and affirmed the PYD as the representative of the Kurds in Syria, posing another direct challenge to Barzani and the KDP. The PKK-Goran alliance also is based on shared concerns about Turkey’s regional power and the need to check Erdogan’s influence over Iraqi Kurds and in Syria.

It is unlikely that the PKK will weaken the deeply rooted patronage networks inside the Kurdistan Region that will assure Barzani power and KDP and PUK influence for years to come. Many people, particularly the youth, may support the PKK as true Kurdish nationalists and back Goran; however, they also have been co-opted by the increasingly generous handouts and comfortable lifestyles made available to them by the KRG in recent years. Many others are disinterested in politics altogether or unwilling to pay the consequences of being linked to the opposition.

Still, PKK engagement in Iraqi Kurdish politics matters because it reveals the growing complexity of the trans-border Kurdish problem and the PKK’s political agenda to change the status quo. This challenge will not only be about advancing Kurdish nationalist rights in different states, but clarifying who will represent Kurdish interests and what form these nationalist interests should take. Whatever the outcome, these struggles will likely create a wide opening for more deal-making between Kurdish groups and regional states, keeping the Kurdish nationalist movement fragmented from within and across borders.