At first glance, Syrian Kurds have benefited from their country’s ongoing crisis, writes Denise Natali for Al-Monitor. Yet, a deeper look at the shifting dynamics of the Syrian upheaval reveals a more uncertain scenario for the Kurds. The Syrian Kurdish unrest is as much a contest over regional leadership as it is over Kurdish autonomy. 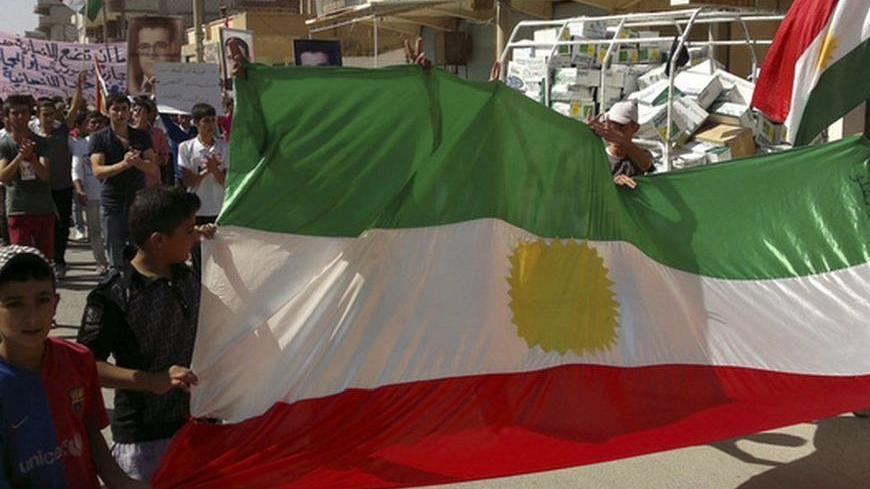 At first glance, Syrian Kurds have benefited from their country’s ongoing crisis. In just one year, they have gained international recognition, accessed organizational support and asserted some territorial control. The revolutionary climate also has helped advance Syrian Kurdish claims to their group rights, which focus on autonomy in a federal Syria state.

Yet, a deeper look at the shifting dynamics of the Syrian upheaval reveals a more uncertain scenario for the Kurds. The continuing crisis has reinforced power struggles between Kurdish factions, heightened the Kurdistan Workers Party (PKK) insurgency and encouraged growing political tensions inside Iraqi Kurdistan. These threats will further check regional support for Syrian Kurds — outside the PKK — making their future prospects dependent upon pacts with groups inside the Syrian state.

The Syrian Kurdish unrest is as much a contest over regional leadership as it is over Kurdish autonomy. Despite the so-called unity agreement between Syrian Kurdish groups, power struggles have become more pronounced between the two main factions and their leaders, who reside outside Syria’s borders: Iraqi Kurdish President Masoud Barzani and imprisoned PKK leader Abdullah Ocalan. Although Barzani has been able to semi-legitimize the fractious group of 16 Syrian Kurdish parties into a Kurdish National Council (KNC) — largely comprised of his tribal affiliates from the Jazira and Syrian KDP cadres in the diaspora and Erbil — he has been unable to check the PKK and its Syrian branch, the Democratic Union Party (PYD).

In fact, the PKK/PYD has gained ground in certain regions. Alongside deep-rooted historical and cultural ties to local populations, the PKK/PYD has brought in large numbers of recruits from the Qandil Mountains and assumed control of border regions in northwest Syria with the tacit support of Assad and the Syrian army. When Barzani recently tried to send hundreds of Syrian Kurdish army defectors that he purportedly trained into Syria — wearing Kurdish Peshmerga uniforms — they were rebuffed by the PKK/PYD and sent back to the Kurdistan Region.

Regional states have also checked Iraqi Kurdish support for their Syrian Kurdish brethren. Although Ankara is a key ally of the Kurdistan Regional Government (KRG) and has intensified its efforts against the PKK, it did not take kindly to Barzani’s recent public statement that he was “training Syrian Kurdish fighters.” Part of Turkish Foreign Minister Ahmet Davatoglu’s controversial visit to Kirkuk last month involved reprimanding Barzani, and clarifying that KRG support is targeted at the Syrian opposition and not Kurdish national interests.

Iran has shown even less tolerance for Kurdish engagement in Syria. It has turned to Iraqi President Jalal Talabani, leader of the Patriotic Union of Kurdistan (PUK), to challenge the Ankara-Barzani alliance and assure that the Iraqi Kurds stay out of the Syrian crisis.

The brewing regional proxy war between Turkey and Iran has aggravated internal divisions in Iraqi Kurdistan and further undermined Kurdish leverage in Iraq. Indeed, these tensions started to resurface well before the Syrian crisis. Barzani’s centralization of power and the weakening of PUK influence in the Kurdish north has led to a reshuffling of alliances and efforts to check Erbil. The recent public agreement between Talabani and Nowsherwan Mustafa, leader of the opposition Goran Movement, to re-write the draft Iraqi Kurdish constitution and assure a parliamentary system was a clear reaction to Barzani’s political overreach and trends toward presidentialism. So, too, was their refusal to support Barzani’s failed attempt to unseat Iraqi Prime Minister Nouri al-Maliki in a no-confidence vote.

Still, by intervening in Syria and trying to influence Syrian Kurdish nationalism, Barzani has challenged what remains of the power-sharing agreement with the PUK. KRG interventions in Syria not only highlight the PUK’s political impotence in the Kurdish north, but also undermine Talabani’s delicate position in Baghdad and his need to maintain relations with Maliki and Tehran. Even then, Barzani cannot fully alienate Iran or the Iraqi central government without risking more border instability (Iran also supports the PKK) and political backlash, particularly since the KRG is dependent upon Baghdad for its annual revenues and payments to oil companies. This is why KRG officials met with Iran’s leading Qods official last week, and why Prime Minister Nechervan Barzani is planning his own tête-à-tête with Tehran to discuss political relations.

As Iraqi Kurds maneuver between Turkey and Iran and attempt to reconcile their competing interests, they are likely to step back from supporting Syrian Kurdish autonomy, at least publicly. Barzani will certainly continue to cooperate with Ankara to check the PKK and try to bring the KNC into the larger Syrian opposition movement.

Yet, given the economic and political stakes involved, the KRG will need to assure its regional alliances over Syrian Kurdish nationalism, much the way it has done, or has been pressured to do in Turkey and Iran. For Syrian Kurds, these geopolitical realities, as well as the unlikelihood of an international safe haven, indicate that their nationalist demands will have to be negotiated inside Syria, and in conjunction with other minority groups and the larger Syrian opposition movement.

Denise Natali holds the Minerva Chair at the Institute for National Strategic Studies (INSS), National Defense University and is the author of The Kurdish-Quasi-State: Development and Dependency in Post-Gulf War Iraq. The views expressed are her own and do not reflect the official policy or position of the National Defense University, the Department of Defense or the US government.