Even as the Syrian crisis deepens, Kurdish groups have not become the decisive minority to help overthrow the Assad regime. Most demand Kurdish rights in the Syrian state, but superseding those desires are nationalist goals that have become part of regional proxy wars, sectarian tensions, and competing cross-border nationalism. Denise Natali analyzes this crucial time for Kurds in the region. 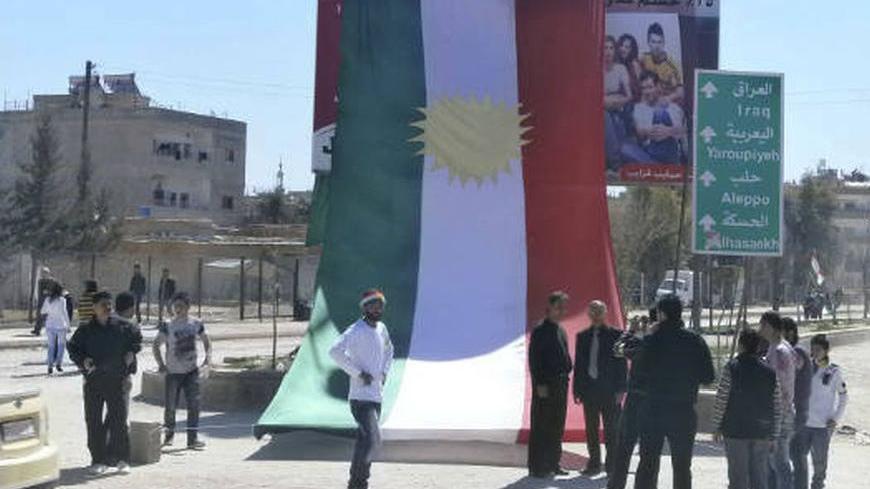 People stand in front of a Kurdish flag during a protest against Syria's President Bashar al-Assad, and celebrating Nowruz held by Kurdish community in Qamishli March 21, 2012. - REUTERS/Handout

Although the Syrian crisis continues, Kurdish groups have not become the decisive minority to help overthrow the Assad regime. Most demand Kurdish rights in the Syrian state; however, their nationalist goals have become part of regional proxy wars, sectarian tensions, and competing cross-border nationalism. The Syrian Kurdish opposition now involves relations with Ankara and other Kurdish groups as much as Damascus. While the Partiye Karkeren Kurdistan (PKK) has entered the conflict alongside Assad and against Turkey, Iraqi Kurds have intervened on behalf of Ankara and their own nationalist interests.  These cross-cutting links will not only stifle a unified Syrian Kurdish movement, but they will likely create new opportunities for group conflict and border instability.

The Syrian Kurdish opposition is ineffective because it is targeting multiple fronts — the Assad regime, the Syrian opposition, Turkey, and fellow Kurds — that reinforce its disunity. Anti-regime sentiment is rooted in the discriminatory policies of Syrian Arab Baathism that excluded Kurds on an ethnic basis while assimilating them as Syrians, tribal chiefs and public officials. A shared sense of Kurdish ethno-nationalism certainly emerged; however; it fragmented between different socio-economic groups. This is why many Kurds have created the Kurdish National Council (KNC) and will not support the Sunni-Arab based Free Syrian Army, while others who have assimilated into the Syrian state have refrained from opposition politics altogether.

Nor do most Syrian Kurds support The Muslim-Brotherhood influenced Syrian National Council (SNC), the main opposition group based in Istanbul. Turkey’s inability to resolve its own Kurdish problem under the AK party has left Syrian Kurds worried of a similar fate under SNC rule. These anti-Turkish sentiments also reflect the significant PKK representation among Syrian Kurds — approximately one-third of rank-and-file members — and the group’s renewed alliance of convenience with Assad.  The PKK’s increasingly active role in Syria has not only hardened Turkey’s security concerns, but has reinforced intra-Kurdish tensions. The PKK and its local Syrian branch, the Democratic Union Party (PYD), continue to recriminate against fellow Kurds opposing Assad.

Further complicating the situation are Iraqi Kurds, who have deep-rooted institutional and tribal patronage networks in Damascus and the al-Jazira region. The two main Iraqi Kurdish parties, the Kurdistan Democratic Party (KDP) and the Patriotic Union of Kurdistan (PUK) have operated in Syria for over three decades, alongside their local branches, with the tacit agreement of Assad and his security apparatus.  Even after Iraqi Kurdish president Masoud Barzani started to support regime change, Iraqi Kurdish influence in Syria continued. Barzani has reached out to KDP-tribal loyalists, independents and youth groups in his attempt to secure leadership among Syrian Kurds and counter PKK support.

The problem, however, is that despite a commitment to Kurdish rights, Iraqi Kurds can only offer limited support to their Syrian Kurdish brethren. The Kurdistan Regional Government (KRG) needs to assure the viability of its own autonomous region, which is highly dependent upon Turkey as a leading commercial partner and political ally. Securing this alliance requires repelling the PKK and moderating Syrian Kurdish demands. The PKK threat has become especially important for Ankara as the radical group has extended its influence across four geographically contiguous states in Turkey, Iraq, Iran and now Syria.

In fact, Barzani has become the unofficial envoy for Turkish Prime Minister Tayyip Erdogan in managing Kurdish nationalism in Syria and across borders. During a recent meeting in Istanbul, Barzani assured Erdogan that he would expel the PKK from his region if it continued to engage in warfare. The Iraqi Kurdish leader also downplayed his support for Syrian Kurds by publicly offering his “general support to the people of Syria and the rights of Kurds to become Syrian citizens.”   He did not, however, mention Kurdish autonomy in a post-Assad state.

In exchange, Ankara has reaffirmed its backing of the KRG.  The strengthening of ties between Turkey and Erbil comes at a time of increased tensions between Erdogan and Iraqi Prime Minister Nuri al-Maliki, as well as between Iraqi Kurds and Baghdad. The KRG will continue to take advantage of this alliance to gain leverage in Iraq and the region, particularly as it seeks to develop its emergent energy sector apart from the Iraqi central government.

Still, realities on the ground will ultimately check the KRG’s ability to fulfill its promises to Ankara. Like their Syrian Kurdish brethren, Iraqi Kurds are equally concerned about the prospects of an Islamic, Brotherhood-influenced regime or a Sunni-Arab government assuming power in Syria. Iraqi Kurds and Barzani’s Dohuk region in particular, compete with the Kurdish Islamic Union and do not welcome the prospects of The Muslim Brotherhood's influence on its own secular nationalist project.

Moreover, as the gap between what Iraqi Kurds have attained, and what Syrian and Turkish Kurds have not, becomes increasingly evident, it will be even more difficult for Iraqi Kurdish leaders to contain Kurdish nationalism across borders. Kurdish political expectations will also strengthen as democratization movements in the region continue and the issue of minority group rights remains on reformist agendas. This dilemma is compounded by demographic trends. As Iraqi Kurdistan has become a safe haven for Kurdish groups from Turkey, Iran and Syria, the KRG will be challenged if it clamps down on other nationalisms while it expands its own, particularly since the PKK has popular support among local populations.

Given these constraints, Syrian Kurds are unlikely to gain the external support needed to propel their nationalist demands or fundamentally alter the balance of power in Syria.  What is more likely is a continuation of the status quo, with different Kurdish groups trying to take advantage of the political vacuum and shifting alliance structures. The most unsettling possibility, however, is the PKK-ization of the Syrian Kurdish opposition, particularly if moderate groups remain checked by the SNC and fail to receive the backing they need to advance their group claims.

Denise Natali holds the Minerva Fellow at the Institute for National Strategic Studies (INSS), National Defense University and author of The Kurdish-Quasi-State: Development and Dependency in Post-Gulf War Iraq. The views expressed are her own and do not reflect the official policy or position of the National Defense University, the Department of Defense, or the U.S. government.