How the Syrian Opposition Can Court the Kurds

Replacing its previous leader with a Kurdish academic is a good step towards co-opting the Kurds into the Syrian National Council, writes Denise Natali. But Kurdish nationalists will need assurances like Kurdish-language schools and parliamentary committees, otherwise, they will likely remain a thorn in the side of opposition politics. 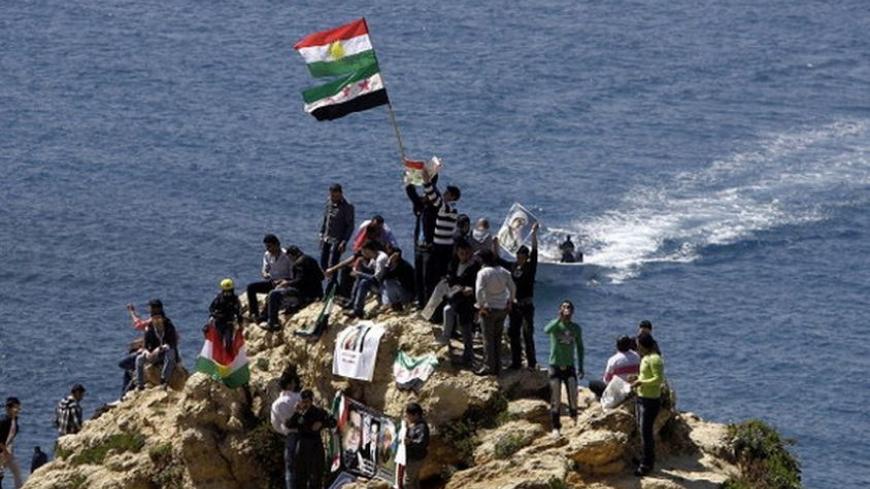 One of the missing links to a viable Syrian opposition is the Kurds. While comprising only 8% of Syria’s population, they represent the minority voice needed to help strengthen the Muslim Brotherhood-based Syrian National Council (SNC). This is why the SNC recently named a Kurd as its new leader while the Free Syrian Army is now calling on its "Kurdish brothers" to join forces against President Bashar al-Assad. Yet, if the SNC and its partners want to gain and sustain a Kurdish buy-in, then they will have to move beyond the anti-Assad rhetoric and focus on the source of the problem, regime alternatives the Kurds can trust. At minimum, this effort will require restructuring the SNC or creating a real umbrella opposition group that is inclusive of secular and locally-based leaders and de-linked from Turkey and its Kurdish problem.

It is a mistake to think that Syrian Kurds are eschewing the SNC because of uncertainty about the future. On the contrary, like Christian and Alawite groups, most are clearly aware of their political prospects under a Muslim Brotherhood-SNC influenced, post-Assad government. Repercussions of regime change on minority groups in the Middle East and the particular fallout from the revolts in Egypt and Tunisia have confirmed these fears. Sectarian conflict in Iraq is another clear reminder for Syrian minority groups of what is likely to emerge in a post-Assad state.

Syrian Kurds’ distrust of the SNC also is tied to ethno-nationalist and cross-border politics. Their historical trajectory not only is tainted by exclusionary Ba’athist policies inside Syria, but by close relations with Turkey’s Kurds and their own displacements to and from southeastern Turkey. With the SNC integrally linked to Ankara and the Kurdish problem in Turkey unresolved after nearly three decades, many Syrian Kurds see a similar fate under an SNC-influenced regime. Even those Syrian Kurdish groups who support Iraqi Kurdish leader Massoud Barzani, now an ally of Ankara , are reticent to join the SNC.

The SNC is attempting to address these weaknesses. Replacing its previous leader Burhan Ghalioun, a Paris-based intellectual with Abdul Bassett Sayda, with Kurdish academic, and promising to safeguard Kurdish rights in a post-Assad Syria may appease Kurdish and other minority groups. Some Kurds from the Kurdish National Council (KNC), which represents 11 Kurdish groups in Syria, have expressed willingness to compromise, affirming they do not seek to divide Syria, but to assure a secular state that protects Kurdish national identity, gender equality, and religious freedoms.

Still, Sayda’s appointment is unlikely to be a game changer for the SNC. Like Ghalioun, Sayda is a diaspora Kurd based in Europe who is removed from local politics and with no loyalties on the ground. He may bring together various, educated expatriate Syrian communities during his brief three month tenure, but he will unlikely be able to create the political pacts necessary to sustain a cohesive opposition movement or a post-regime transition.  Moreover, Sayda’s appointment does not alter the fundamental origins and structure of the SNC, which continues to hold its meetings in Istanbul amidst a majority of Muslim Brotherhood members, and in the absence of influential local leaders on the ground.

Instead of merging with the larger Syrian opposition, Syrian Kurds are attempting to unify and strengthen their own fragmented movement. The relatively moderate KNC has recently signed an agreement with the other main Kurdish opposition group and PKK affiliate, the Democratic Union Party (PYD), which now calls itself the "People’s Council."  The seven-point proposal, recently negotiated in Erbil under the guidance of Iraqi Kurdish parties and signed in the Syrian Kurdish town of Qamishli, aims to increase cooperation between the two Syrian Kurdish factions and cease intra-Kurdish military actions. This agreement, if honored even in part, could make it more difficult to incorporate Syrian Kurds into the SNC or reach a compromise, particularly if the extremist PYD/PKK is involved.

This is where Turkey’s role is vital. Ankara can continue to press Barzani to nudge Syrian Kurds to support the SNC.  It also can welcome displaced Syrians in its refugee camps, assure border security, and call for international humanitarian intervention. Yet, if Turkey wants to really shape Syrian opposition politics and outcomes through the SNC, and co-opt Syrian Kurds away from the PKK, then it will have to include a solution to its own Kurdish problem as part of its strategy.

Appealing to Kurds as fellow Muslims, as the AK party has done in Turkey will only have partial success. The real litmus test will be to appease the SNC’s biggest challengers — secular Kurdish nationalists. Ankara’s recent promises to expand Kurdish language in schools, create a parliamentary committee to address the Kurdish problem and modify the Turkish constitution are steps in the right direction. These measures, if implemented and made to appear believable could help reassure Syrian Kurds and other minorities that their political future in the Syrian state could actually improve after Assad. If not, Syrian Kurds will likely remain a thorn in opposition politics and a post-Assad state.

Denise Natali holds the Minerva Chair at the Institute for National Strategic Studies (INSS), National Defense University and author of The Kurdish-Quasi-State: Development and Dependency in Post-Gulf War Iraq. The views expressed are her own and do not reflect the official policy or position of the National Defense University, the Department of Defense, or the U.S. government.