The Islamization of the Syrian opposition is giving the PKK and its local affiliate, the Democratic Union Party (PYD), a new source of strength and local support, writes Denise Natali. 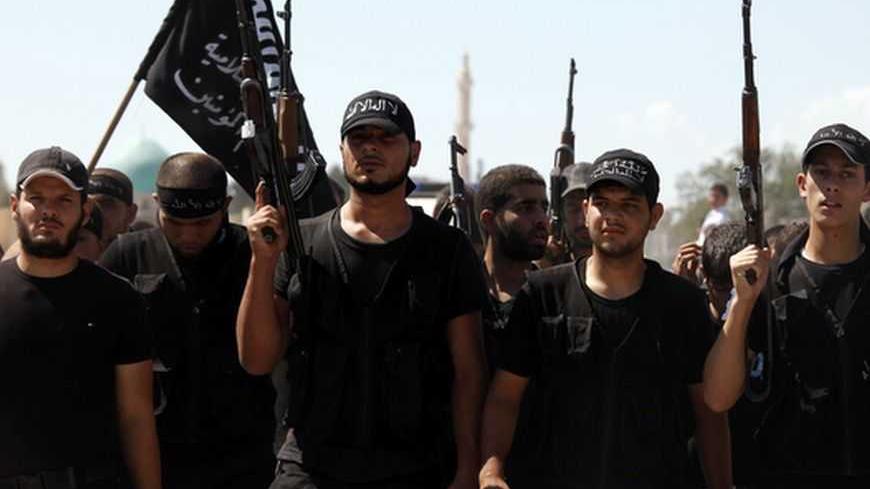 Islamist fighters carry their flag during the funeral of their fellow fighter near the village of Fafeen in Aleppo's countryside Sept. 17, 2012. - REUTERS/Zain Karam

The Islamization of the Syrian opposition is giving the Kurdistan Workers Party (PKK) and its local affiliate, the Democratic Union Party (PYD), a new source of strength and local support. The Muslim Brotherhood’s influence in the Syrian National Council (SNC) and Al-Nusra’s willingness to militarily target the PKK/PYD has helped reinforce the radical Kurdish nationalist group’s image as a defender of a secular Syrian state and Kurdish rights. This trend is occurring as moderate opposition groups fail to coalesce into a viable alternative distinct from Turkish interests. Left unchallenged, the PKK/PYD will become increasingly difficult to extricate from Kurdish-populated territories, making it the only real power broker with whom to negotiate among the disparate Kurdish groups.

The PKK/PYD influence may have taken root in anti-Turkish sentiments shared with the Asad regime, but it has expanded due to misguided strategies of Syrian opposition groups and their external patrons. Attempts to use Iraqi Kurdish leader Massoud Barzani and the Kurdish National Council (KNC) to influence Syrian Kurds have been a political mistake. Barzani’s influence is limited in Syria, and the KNC remains fragmented and virtually irrelevant. Divisions between factions tied to Barzani’s Kurdistan Democratic Party and Iraqi President Jalal Talabani’s Patriotic Union of Kurdistan, as well as the Kurds’ strict nationalist demands, continue to impede an alliance with the SNC and a larger pact between Kurds and Arabs. Even though youth groups can mobilize the Kurdish streets and are considered by average Kurds to be the only real group in the revolution, they lack the institutional patronage networks, military forces and finances to effectively challenge the PYD/PKK.

The Salahideen Ayubi Brigades, a group of Kurds, Arabs and Turks that has merged with the Free Syrian Army, also have failed to challenge the PYD/PKK. Like other Ankara-sponsored initiatives in the region, the Brigades’ attempts to use Sunni Islam to appeal to Syrian Kurds have had the opposite effect. Although the Kurds are largely Sunni Muslim, they are a relatively secular minority. Most remain wary of Ankara’s ambitions not only because of its unresolved Kurdish problem, but because of its efforts to export Islam and its ties to Salafists channeling operations through Turkey. The fact that the Salahideen Brigades have a tacit understanding with al-Nusra jihadists — who are seeking a Caliphate in Syria — and are fighting side by side with them has limited any potential ties they can forge with moderate Kurds.

The radicalization of Islamic groups and absence of an effective moderate Syrian or Kurdish opposition group to challenge them has allowed the PYD/PKK to present itself as an alternative to the jihadists. The PKK/PYD has recently attempted to differentiate itself from the Islamic threat by passing woman’s-rights civil codes in the Kurdish areas. Even moderate Kurds who harshly criticize the PYD/PKK — some of whom have been tortured by them — have stated they would back the group as a lesser evil to the Muslim Brotherhood, al-Nusra and al-Qaeda. In fact, the Salahideen Brigade will not enter PKK/PYD neighborhoods because it fears its presence will strengthen them.

The PYD/PKK’s influence has been further encouraged by the Jihadist push into Aleppo, where the PKK/PYD power base is strongest. Although the approximately 10,000 Kurdish Alawites concentrated in the mountainous areas outside Aleppo are small in number, they are influential in the region and back the PYD/PKK, alongside fellow Syrian Alawites who are equally committed to a secular Syrian state. PYD leader Dr. Bahouz Ardal is an old friend of Assad.

These deep-rooted political, economic and cultural Alawite networks, alongside a weakened Syrian state, have enabled the PYD/PKK to expand its territorial gains and regional leverage. In addition to key border regions, the PYD-PKK now controls the Efrin Mountain, which is only about five miles from the Turkish commercial town of Gaziantep. This gives the group yet another base from which to launch its cross-border operations against Turkey, alongside its headquarters in Qandil, Iraqi Kurdistan.

Indeed, there is no guarantee that the PKK/PYD will be able to maintain its influence and effectively administer the Kurdish regions over the long term without external support and internal alliances. Much also will depend on the way the PKK/PYD can appeal to youth groups and administer the Kurdish regions without extortion and violence against fellow Kurds. Still, as long as the battle for Syria involves a potential Arab nationalist or Islamic state and Kurdish groups fail to compromise with their Syrian counterparts, the PKK/PYD will dominate the Syrian Kurdish political arena. This could likely result in a more difficult negotiating process that includes the PYD/PKK, ongoing conflict and border instability far beyond the presence of the Asad regime.