Turkey’s Missed Opportunities With the Kurds

Disarray in Turkish foreign policy is not allowing Turkey to play its rightful role in supporting Kurdish national unity. 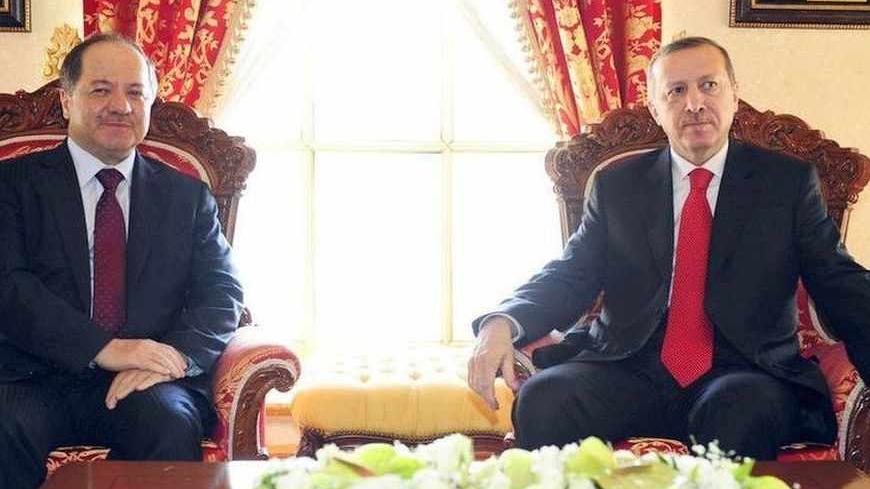 The idea of convening a Kurdish National Congress of Kurds from "four parts" in the Iraqi Kurdistan — or South Kurdistan — town of Erbil that has become the Kurdish national center goes back four years.

What is meant by "four parts" are the four countries Iran, Iraq, Syria and Turkey, where the Kurds have been forced to live without their own state despite their sizable populations and geographical continuity. An important element in the injustices heaped on the Kurds occurred after World War I, when Western colonial powers reshaped the region on the rubble of the Ottoman Empire with the creation of Persian, Arab and Turkish nation states (Iran, Iraq, Syria and Turkey). But this doesn’t mean one should overlook the Kurdish social structures that are vulnerable to divisions, tribal rivalries, internal conflicts and their feeble national consciousness that enhances such injustices.

The game changer was probably the emergence of the Kurdistan Regional Government [KRG] as a quasi-independent Kurdish entity after 2003. The KRG, with Massoud Barzani as its elected president, thus became what can be called a "national center"’ for Kurds all over the world.

This is why convening a Kurdish national congress goes back years and is attributed to Barzani. When in 2009 Turkey decided on an "opening to Kurds" in a manner that foresaw the ultimate settlement of the Kurdish issue, it attached its hopes on the Kurdish national congress. Turkey was aware that for decommissioning, disarming and finally disbanding the PKK, it had to be an all-Kurdish national decision that could only be taken through a national Kurdish congress to be convened under the auspices of Barzani. Turkish government and Iraqi Kurdish officials have been discussing how to convene this Erbil meeting that will be oriented to the final goal of disarming the PKK.

Turkey was against having the PKK as an entity at the negotiation table, but not the PKK people, in a way reminiscent of Israel’s opposition to have the PLO at the table in the 1991 Madrid Middle East Peace Conference. In that conference, PLO-endorsed Palestinians were part of the joint Jordanian-Palestinian delegation but the PLO was not at the table. The Palestinians at the table were staying in the same hotel with PLO officials not far from the conference venue, and were reporting every minute of the conference to them and coming back with instructions they got from them. But the farce did not last too long. Two years later, the world found out that the Israelis were sitting down in secret but direct bilateral talks with the PLO in Oslo.

Turkey’s approach to a Kurdish national congress in 2009 was similar. Since the goal was the disarming of the PKK, many high expectations were raised. So much so that Iraqi President Talabani, who doesn’t hesitate to appease Turkey and who knows by experience what Turks would most like to hear, on his first official visit to Turkey in March 2008 met privately with three Turkish journalists — the late Mehmet Ali Birand, Hasan Cemal and Cengiz Candar (this writer) — all veterans of the "Kurdish file" and told them that the "Kurdish National Congress" could be meeting as early as March or early April. That remark created quite a sensation.

Barzani had tasked Fouad Hussein, his right-hand man with the title of head of the Presidential Court of Kurdistan Region, to work on convening the "Kurdish national congress." In mid-March 2008, I was in Washington with Hussein to participate in the "Turkey-KRG Relations" workshop organized by the Atlantic Council. When I asked Hussein about the date of the national congress, he said to me: "I have not started any work on it. Most optimistically, it can convene in the fall of 2009."

But what about that statement Talabani had made to the three journalists, including me? There were only a couple of weeks left for the date he had given us to be met. Hussein replied: "We are also curious on what Mam Jalal based his thinking on to give such a date."

What I heard from Hussein that day was yet another one of countless lessons I have learned: that declarations even by the most authorized names won’t necessarily be correct when the geography is the Middle East and the subject is Kurds.

In the fall of 2009, the highly anticipated "Kurdish opening'' of the Erdogan government was suspended. Erdogan, already uncomfortable with the "Kurdish" adjective of the "opening," renamed it within two weeks as the "democratic opening" and then abandoned that one too, and decided on "National Unity and Brotherhood Project." These are the words he is using in all his speeches today.

The Kurdish national congress that was on the agenda for 2009 but then shelved, reappeared on the agenda in 2013. This time, it is almost certain that it will be held in August or September. At the beginning of this week, all Kurdish political parties, political movements and institutions of the "four parts" came together in South Kurdistan’s town of Selahaddin at Barzani’s presidential palace and residence, about 20 kilometers (13 miles)  from Erbil.

A preparatory committee was formed and an announcement was made about the convening of the national congress within a month. Barzani, who opened the meeting, said he was opening the gathering also on behalf of Talabani and Ocalan, whose opinions were solicited before calling for the congress. He thus declared that the Kurds have three historic leaders: Talabani, Ocalan and himself.

Certainly launching the solution process with Abdullah Ocalan — and the rapidly growing likelihood that also in Syria a quasi-independent structure could emerge along the lines of Iraq’s KRG — has facilitated convening such a national congress. What couldn’t be done in 2009 is now feasible.

Sitting next to Barzani, who hosted and opened the meeting, was a three-member official PKK delegation. A little away were Selahattin Demirtas, the co-chair of Turkey’s pro-Kurdish Peace and Democracy Party, BDP and Ahmet Turk, a veteran Kurdish politician who is the co-chairman of the Democratic Society Congress. That meant all the key elements of Kurdish political movement in Turkey, led by the PKK, were represented. Turkish media reported the meeting as a routine news item.

The most striking feature of the meeting was about Rojava. Rojava means west in Kurdish. It is used to depict Western Kurdistan and Syrian Kurdistan. Just like perestroika and glasnost entered global jargon once, Rojava is finding its place in Turkish political terminology. This is how Demirtas explained the concern of the Kurdish National Congress with Rojava: "We assess the latest developments as changing of balances. This congress will declare to the world in which countries Kurds want to live and with what statute. Syria is now in a quagmire. The entire world is looking for a way out of it but can’t find it. Syrian Kurds have a key position. The people and the entire array of parties in South Kurdistan are ready to support the people of Rojava. The congress can make this support institutional because the hearts of not only the Kurds in Turkey, but all the Kurds, are beating for Rojava."

But Rojava is causing palpitations in the heartbeats of the regime and government in Turkey. There are nonstop security meetings. Ankara is announcing that the Kurds of Syria cannot go under the control of the PYD, identified as the PKK’s extension in Syria. [PYD was represented at the Preparatory meeting at Selahaddin.] Meanwhile, there are claims circulating that Turkey is providing logistical support to the al-Qaeda-linked organization Jabhat al-Nusra that has declared its loyalty to al-Qaeda leader Ayman al-Zawahri (which been classified as terrorist by the United States) and to the Islamic State of Iraq and Syria.

If these charges are true, it would mean a serious breach of the promises made to President Barack Obama in their May 16 White House meeting. No wonder Foreign Minister Ahmet Davutoglu, in a statement to daily Radikal on July 25, went as far as implying that these organizations are "traitors to the Syrian revolution," thus admitting Turkey's acute embarrassment with the situation.

Turkey could have the played the role of unifier of all Kurds. But to do that, Turkey has to get out of the heavy coma it entered after successive events of the Taksim-Gezi Park protests, the removal of the Muslim Brotherhood from power in Egypt and severe traumas it is suffering from the Syrian Kurds’ march toward self-rule.

Cengiz Çandar is a contributing writer for Al-Monitor's Turkey Pulse. A journalist since 1976, he is senior columnist of Radikal in Istanbul. Çandar was a special foreign policy adviser to Turkish President Turgut Özal from 1991 to 1993.