Now that Iraqi Kurdistan's president has left Istanbul, Turkey is denying reports that he had appealed to President Recep Tayyip Erdogan to free several prominent Kurdish politicians from jail, probably because suggestions that Barzani was lobbying on behalf of Turkey's pro-Kurdish parties complicated Erdogan's efforts to woo Kurdish voters in the run-up to the April 16 referendum. 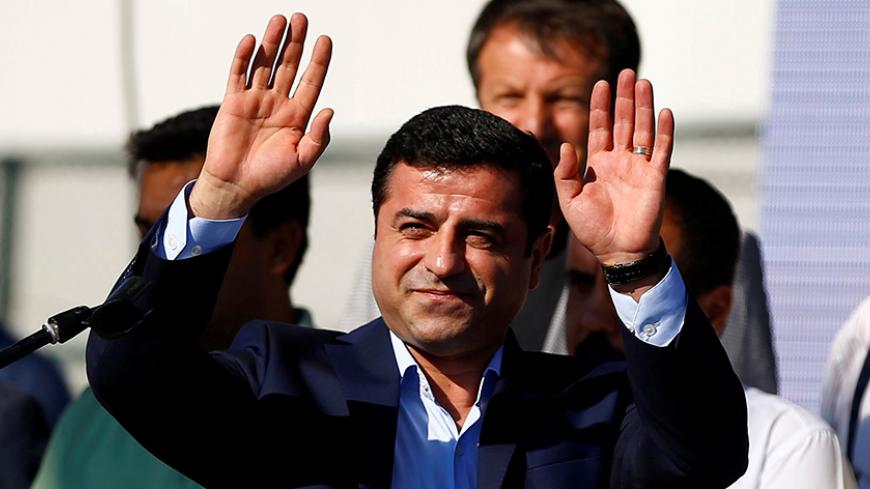 Selahattin Demirtas, the co-leader of the pro-Kurdish Peoples' Democratic Party, greets the crowd during a peace rally to protest against Turkish military operations in northern Syria, in Istanbul, Sept. 4, 2016. - REUTERS/Osman Orsal

“These subjects did not come up,” Kurtulmus asserted. He said that regional peace, reviewing cooperation between Turkey and the Kurdistan Regional Government (KRG) and the joint fight against terrorist organizations topped the agenda during Barzani’s meetings with Erdogan and Prime Minister Binali Yildirim.

But a senior Iraqi Kurdish official familiar with the substance of the meeting confirmed to Al-Monitor that the plight of Demirtas and his fellow HDP members of parliament was raised by Barzani with Erdogan. The official, who asked not to be identified by name because of the delicate nature of the subject, declined to elaborate.

Reports that Barzani had spoken to Erdogan on the HDP’s behalf were first reported by Rudaw, one of Iraqi Kurdistan’s biggest media outfits.

Rudaw attributed the news to Ahmet Turk, a veteran Kurdish politician who met with Barzani. “Turk said Barzani, in his meeting with the president of the Republic of Turkey, had asked for the release of Demirtas and his friends,” Rudaw reported.

KRG spokesman Safeen Dizayee could not be reached for comment.

Setting aside what he said or didn’t say to Erdogan, Barzani did call for the Kurdish politicians’ release in an interview with the German newspaper Frankfurter Allegemeine Zeitung just days before leaving for Turkey.

So why did Kurtulmus feel compelled to rebut the news? Probably because suggestions that Barzani was lobbying on behalf of the HDP did not chime with the intended effect of his presence, which was to woo Kurdish voters in the run-up to the April 16 referendum on boosting Erdogan’s presidential powers. Erdogan's embrace of the Iraqi Kurds sends a message, or so the government hopes, that the ferocious crackdown on the HDP and its affiliates does not mean that the government is anti-Kurdish.

Whatever the government’s calculations, they seem to have gone hopelessly awry. Erdogan is relying above all on far-right nationalists to help carry the vote. But many were incensed when the Iraqi Kurdish flag was hoisted alongside the Iraqi and Turkish ones during Barzani’s formal reception at the airport.

Ultranationalist newspaper Yeni Cag seized on the affair to take a further swipe at far-right Nationalist Action Party leader Devlet Bahceli over his support for Erdogan. The newspaper, which is among the most widely read in nationalist circles, backs Bahceli’s rival, former Interior Minister Meral Aksener, who is also seen as a potential threat to Erdogan.

The taunts forced Bahceli to re-burnish his nationalist credentials. “It is a scandal, a disgrace that this flag has been held on a par with the Turkish flag and raised. Is it a result of bureaucratic incompetence or a well-conceived plot?” he fumed in a speech to his deputies in the parliament today. “Barzani is working to free the jailed HDP members. [He] should first account for his support for the [Kurdistan Workers Party] and the lives of our martyrs. He must pay the price for the traps he set for Turkey,” Bahceli thundered.

Kurtulmus dismissed the furor over the flag, saying it was not the first time the Kurdish flag had been raised. “Whenever Mr. Barzani comes to Turkey, the Kurdish Regional Government flag, the Iraqi flag and Turkish flag, all three are raised.”

Barzani may well be wishing he had never come.