How Netanyahu got cold feet over historic peace initiative

Zionist Camp leader Isaac Herzog believed that Prime Minister Benjamin Netanyahu would go through with a historic diplomatic initiative, only to discover later that Netanyahu was never serious about it. 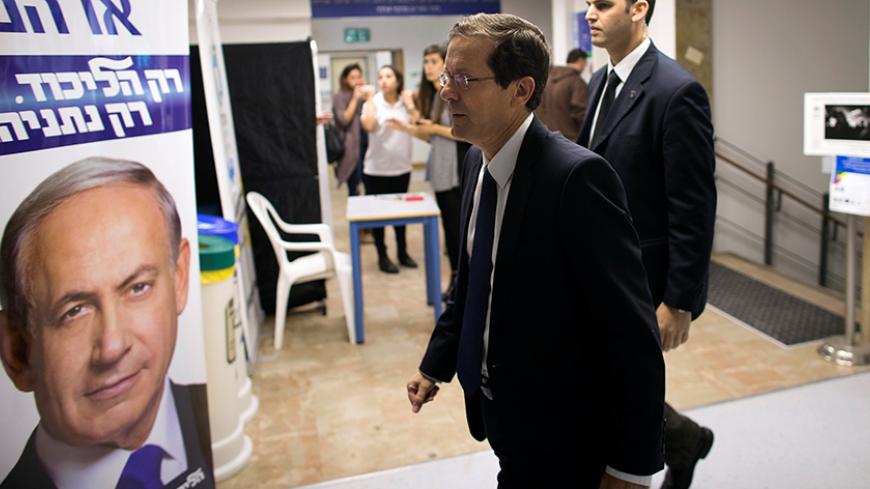 Anyone trying to decipher the true profile of Israeli Prime Minister Benjamin Netanyahu should take an in-depth look at the news reports and informative details that were leaked in 2016 surrounding the endless negotiations held between Netanyahu and Zionist Camp leader Isaac Herzog about forming a unity government in Israel.

Herzog’s Zionist Camp was due to enter Netanyahu’s government as part of a dramatic move of renewing the diplomatic process with the Palestinians and establishing a regional peace initiative. The pragmatic Arab (Sunni bloc) states were supposed to join this process at a well-publicized summit. Initial details about these negotiations were published here in Al-Monitor numerous times.

An article by Barak Ravid in Haaretz on March 5 completes this fascinating puzzle. The puzzle includes (in addition to Netanyahu and Herzog) other notables such as former US Secretary of State John Kerry, Egyptian President Abdel Fattah al-Sisi, Jordanian King Abdullah II and rulers of Saudi Arabia, the United Arab Emirates and other Gulf states. Other actors include former British Prime Minister Tony Blair, Israeli-American billionaire Arnon Milchan, agents in the European Union and innumerable other mediators and emissaries representing themselves.

Two skeptical people accompanied the process from beginning to end: then-US President Barack Obama and Palestinian President Mahmoud Abbas. Neither of these two believed that something real would emerge from this tumult.

Netanyahu operated this tremendous international deployment on two separate tracks, including the “fast track” run by Kerry, who continued to hope for the best until the very last minute. The more modest “slow track” was run between Netanyahu, Herzog and Sisi, with the energetic behind-the-scenes participation of Blair and Milchan.

The two tracks did not conflict with each other but operated simultaneously. The topic of discussion in both tracks involved a dramatic international conference and an announcement of renewing the peace process.

Kerry’s plan was to get Netanyahu to commit himself to the principles of a permanent agreement and to take things even further politically and diplomatically. This would have enabled high-level personages from Arab countries (such as foreign ministers) to publicly join the event. But with Sisi, Netanyahu took fewer risks and also received fewer perks: He was supposed to fly to Cairo in secret and then convene a “surprise” press conference with Sisi. This press conference was to be held in the presence of King Abdullah and lower-level representatives from Saudi Arabia and the Gulf countries, evidently at the level of local ambassador or deputy foreign minister. All of these notables (including Herzog) were supposed to smile widely during the press conference and festively announce the renewal of negotiations on two levels: the Israel-Palestinian and Israeli-Arab tracks. Then Netanyahu and Herzog were to return to Israel and hold their own press conference at the airport. There they would be joined by then-Defense Minister Moshe Ya’alon and Finance Minister Moshe Kahlon, to provide the prime minister with political armor.

Netanyahu, Herzog and all the others invested scores of days and nights, flights, drafts and proposals in this large-scale venture. Netanyahu met with Kerry at least twice, including over a very long dinner in Italy. Herzog almost went to live with Netanyahu. Milchan and Blair were the mediating cheerleaders who attempted to round up support and goodwill. Sisi also took an active part; some think that he was too active. The Saudi top brass and other high-ranking personages from the Gulf were also in deep. Many clandestine meetings were held between the sides. Some were in Cairo, others in Cyprus and in other locations.

Herzog tried to guarantee his position by holding many talks with leaders and diplomats, some of them from countries with whom Israel has no diplomatic relations. Al-Monitor was informed of at least one visit paid by Herzog to an Arab country with which Israel does not have diplomatic relations. A senior political source, speaking on condition of anonymity, quoted Herzog as saying that “Bibi can fool me, but I don’t believe that he can fool everyone.” Herzog derived a lot of encouragement from these talks. He did not believe that Netanyahu would be able to deny it all later on.

There were ups and downs, moments of tension and alarm, but the bottom line is clear: It was much ado about nothing. It is just like what Netanyahu likes to say in the context of the police investigations against him: “There will be nothing, because there is nothing.”

By now it’s already clear that Netanyahu didn’t waste such an intensive year in order to widen the coalition, to reach a diplomatic breakthrough or to make history. He did it simply to keep the American administration occupied, to create the illusion of hope for a diplomatic process to be renewed “any day now.” He hoped to pacify Kerry, who would then calm down Obama, who would then give up his intention to wreak vengeance on Israel for eight years of deadlock — and opting in its stead for a “grand finale” diplomatic achievement.

Those who really understand what makes Netanyahu tick — those who are closely acquainted with the complicated history of his leadership — knew all along that at the moment of truth, the prime minister would abandon ship. And that is exactly what happened. Netanyahu is always the first to blink.

The first time during this yearlong process that he got cold feet he decided to bring Yisrael Beitenu head Avigdor Liberman into the government instead of Herzog. This unexpected, pointed about-face took place in May 2016, leaving the entire system in shock. But Netanyahu’s true artistry lies in his ability to collect the pieces together after his shake-up and then recruit everyone again. The second time, it blew up last October, just before the formulation of the final version of the detailed draft that Netanyahu created for Herzog. This time, the excuse was the fact that the High Court of Justice had refused to extend the date for the evacuation of the Amona settlement. According to a diplomatic source speaking on condition of anonymity, Netanyahu claimed that the evacuation had caused a crisis in his coalition and asked Herzog to wait “a few more months.” At that point, Herzog knew that all was lost. He suddenly understood that he had spent an entire year with his foot on the gas — in neutral.

And that year had wiped out his entire career. The leaks about his anticipated entrance to the government turned him into a political punching bag. When it was all over and he had nothing to show for his efforts, he became a laughingstock. Today, as details about what almost happened have started to leak out, Herzog is trying to restore his public image.

“I did what I did for the state, not for myself,” he said with no small measure of truth — according to a political source speaking on condition of anonymity. It’s a shame that he didn’t check Netanyahu’s record before getting into this futile romance with him. It’s a shame that he didn’t ask late President Shimon Peres, former US President Bill Clinton, former Secretaries of State John Kerry and Madeleine Albright, former Palestinian Prime Minister Ahmed Qurei (Abu Alaa), and many other better and wiser people who had been led astray by Netanyahu. And it always ends the same way: Netanyahu changes his mind, hesitates and vacillates, asks for more time, finds an excuse and then disappears. There is no one who has succeeded in severing him from his mythological right-wing electoral base. Period.