A move to ban the sale of fur in Israel is being blocked by ultra-Orthodox Jews, who are hanging on to the tradition of wearing expensive fur hats on the Sabbath and other holy days. 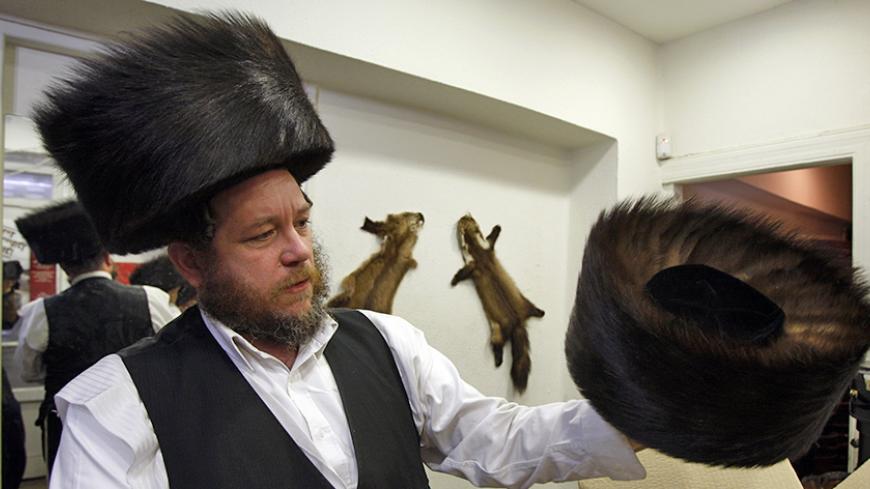 A man holds a shtreimel, a traditional fur hat worn by ultra-Orthodox Jews on festive occasions and holy days, at a shop in Jerusalem's Mea Shearim neighborhood, April 28, 2010. - REUTERS/Baz Ratner

Earlier this month, the Ministerial Committee on Legislation was slated to discuss a new law proposed by Knesset member Meirav Michaeli (Zionist Camp) that would have banned the sale of fur in Israel. Ostensibly, the law, which included articles of clothing, should have passed without opposition. Animal furs are hardly a feature of the local fashion industry. The Mediterranean climate affords very few opportunities to really enjoy the advantages of natural fur, and there is no powerful furrier lobby to impede the passing of such legislation.

It turned out, however, that Israel is an important importer of furs for reasons of tradition. The shtreimel, a traditional hat worn by Hasidic Jews in Israel and around the world, is made from the tails of the sable, a small mammal that lives in the far reaches of the northern hemisphere. The tails come from many different subspecies of the animal and vary in quality and cost. The Canadian sable, for example, is the most expensive, followed by the Russian sable, but there are also shtreimels made of cheaper fur. A single tail from a Russian sable sells for about $30, while Canadian tails can go as high as $70 apiece. In the past, a single shtreimel was made of anywhere from 10-20 tails, but today, some are made from as many as 60. Even without any local fur lobby associated with the fashion industry, the ultra-Orthodox attachment to the tradition translates into a significant powerful force. What this means in practice is that the chances of the legislature banning the sale of furs is negligible. Even discussions about the proposed law were postponed for several months due to pressure from the Knesset's ultra-Orthodox parties.

"People continue to wear shtreimels, even though the cost starts at $1,600 per hat. A law banning the sale of fur is the last thing that will stop us," Menachem Farkash told Al-Monitor. Farkash works for a company that manufactures shtreimels for sale at (relatively) affordable prices. It seems that Michaeli has recognized the obstacle. She amended her proposed legislation so that the ban on the sale of fur would not cover "furs and fur products used for religious or traditional purposes."

The source of the shtreimel is frigid 17th-century Poland, where fur hats were popular among Jews and non-Jews alike. In his story "The Shtreimel Decree," author S.Y. Agnon wrote that the shtreimel came about as a result of a decree by a Polish king, who ordered Jews to wear tails on their heads in order to embarrass them. It was only later that these tails became a legitimate item of clothing, and a prestigious one at that. Regardless of its origins, however, the shtreimel is hardly appropriate headgear for the scorching Israeli summer. Nevertheless, it became an integral part of the traditional garb of Hasidic Jews around the world (including this author). They wear it on the Sabbath, holidays and other joyous occasions.

The shtreimel has had an evolution all its own and a fascinating fashion life that is changing rapidly. Comparing a shtreimel sold 20 years ago with one sold in 2017 is like comparing a rotary telephone with the most sophisticated smart phone. Over the past few years, shtreimels have become more elegant, much taller and more colorful, with rich golden-brown hues that move ever further away from the black-on-black once characteristic of traditional Hasidic dress.

"The most expensive shtreimel now sells for $8,000," said Yosef Glick, a manager of the Bnei Brak branch of Miller's, a manufacturer of premium shtreimels, based in the United States. The height of fashion is the "Bomharten," made from Canadian sable tails, each 12-25 centimeters (roughly 5-10 inches) long (compared to a normal tail's about 6 centimeters). Their natural colors range from dark brown to blond. Glick added that shtreimels are getting taller, too. In the past, the maximum height was 18 centimeters, but he is now selling shtreimels that are 22 centimeters tall.

If the international fashion capital is Paris, then the international shtreimel fashion capital is the Borough Park neighborhood of Brooklyn, populated by many ultra-Orthodox families. "In the United States, no one would buy a shtreimel for less than $4,000. They also developed the open, tall shtreimels. What we are seeing is that it takes about a year for innovations from there to make their way here," Glick said.

Over the past few years, shtreimels made of synthetic fur have started to enter the market as part of efforts to reduce costs. At first, animal rights activists believed that their introduction would lead to a revolution in shtreimel habits, but manufacturer Menachem Farkash ridicules the synthetic products. He believes that a real shtreimel must be made of real fur. "It all began around 2003, when the ultra-Orthodox sector was caught in a serious financial crisis. People started looking for cheaper alternatives and the synthetic shtreimel began appearing. But just as quickly, the whole initiative died. The synthetic shtreimel looks like a costume. It is in no way comparable to the beauty of a traditional shtreimel, made of real fur," Farkash said.

"I'm not too worried about causing suffering to animals, because we only take tails after the rest of the fur has been removed for sale to the international fashion world," said one of Israel's largest importers of sable tails, speaking to Al-Monitor on condition of anonymity. "In the past, [the tail] was considered garbage, but now they realize that there is a market for it, and the price has gone up accordingly."

Nevertheless, he claimed, as soon as alternatives of the same quality and appearance as natural animal tails do appear, most people will switch to them. "We are talking about a custom, rather than a religious obligation per se," he concluded. "There is no religious reason for the shtreimel to be made out of real fur, so I have no doubt that once a synthetic replacement for the real thing of the same quality is developed, the entire market will switch to that, except for a few nouveau riche customers."