Are ultra-Orthodox taking over this secular Israeli city?

Residents of the southern city of Arad are worried about the Gur ultra-Orthodox sect members who are constantly buying apartments there. 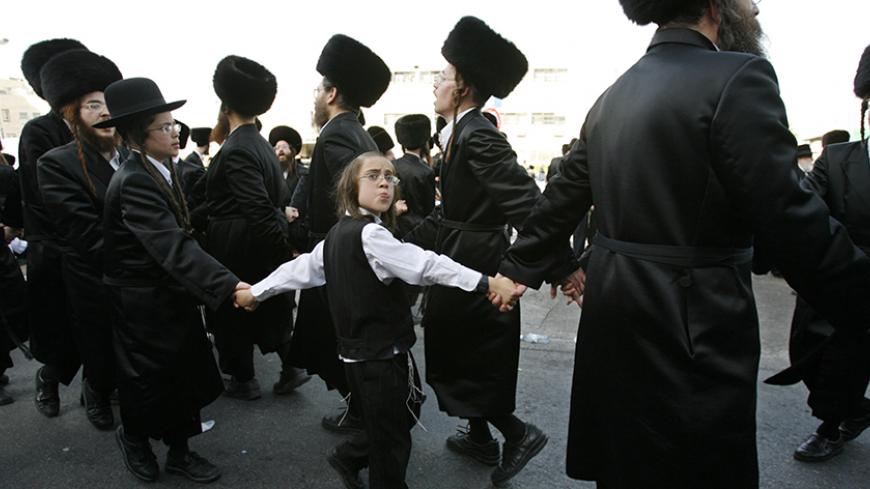 Ultra-Orthodox Jews dance during a wedding celebration for the granddaughter of Rabbi Yaakov Aryeh Alter, a spiritual leader of the Gur Hasidic sect, in Jerusalem, May 29, 2007. - REUTERS/Gil Cohen Magen

The Israeli media have been covering a recent conflict in the southern town of Arad over a local synagogue. On one side are ultra-Orthodox Arad residents affiliated with the Gur Hasidic sect, and on the other side are longtime Arad residents, mostly secular, who claim that Gur Hasidim forcibly took over the synagogue. More specifically, the residents claim that the Gur people took over the main Ashkenazi synagogue that was open to all Arad residents for them to celebrate bar mitzvahs, circumcisions and other Jewish events. The Gur people blame locals for forcefully entering the synagogue and disturbing a prayer service. The struggle brought out the ultra-Orthodox sect, encouraged by the Gur Hasidim, to protest all over the country claiming that the synagogue was violated.

In fact, the conflict runs deeper. For several years, tension has escalated between Arad's ultra-Orthodox and secular residents.

The city of Arad was established in 1962, and is located on the border of the Judean Desert and the Negev, east of Beersheba. In the course of the years, many immigrants from Ethiopia and the former Soviet Union were housed in the city. In the early 1980s, an organized group of Gur Hasidim came to live there because of inexpensive housing. Today, the ultra-Orthodox account for 20% of the local population, out of 25,000 residents.

"In the beginning their presence here was very positive," attorney Uri Arviv, a 32-year-old Arad resident, tells Al-Monitor. "But in recent years we've seen attempts to take over the city. We have no problem with the ultra-Orthodox. We have excellent relations with the Chabad [ultra-Orthodox] community and with the national religious public. The problem is that the Gur Hasidim have been trying to change the character of the city, where in addition they've created a kind of internal autonomy here."

In a conversation with Al-Monitor, the mayor of Arad, Nissan Ben Hamo, described what the "ultra-Orthodox takeover" looks like. "There's an explicit attempt here to change the character of the city," he said. "There's gross violation of the status quo in municipal space. For instance, the destruction of billboards in the claim that they're not modest enough. They [Gur Hasidim] have asked shopping centers not to put up ads with photos of women, and have put up signs with religious content around the city. All this is done to strengthen their presence in the public sphere and signal to secular Arad residents: Leave the city, it's turning ultra-Orthodox."

Menachem Gesheid, a senior figure in the Gur Hasidic community, told Al-Monitor that the mayor, a member of the Yesh Atid Party, is lying for political motives. In his words, Ben Hamo has failed to develop the city, and to cover for his failure he is instigating feelings against the ultra-Orthodox minority. "Gur Hasidim live in mixed cities all over the country and there have never been complaints," he said. "We have no interest in taking over the city and don't want the secular residents of Arad to feel threatened. We want good neighborly relations. A majority of residents opposes the mayor and his tactics of incitement."

Yet Arviv says the city's Gur Hasidim are cut off from the municipality and they do not try to integrate with the city. "They hardly consume anything in the city's businesses — they have private sales of almost anything at their homes," he said. "They don't even use taxis, they have a private ride service. They don't try to be a part of Arad, they use the city as a platform," he accused. "In addition, by means of all sorts of tricks, they don't allow the housing prices here to rise and thus maintain the city as an immigration city intended only for [relatively poor] Gur Hasidim and not for [financially] stronger elements of the general population."

According to city residents, Gur Hasidim advertise fictive ads for apartments for sale for especially low prices in order to reduce home values in Arad. At the same time, members of a special committee of the Gur Hasidim turn to real sellers and match properties for sale to buyers solely from the community. "Gur Hasidim are almost the only people interested in Arad [real-estate wise]," said Gesheid in response. "This isn't a particularly popular place and we're the target sector that expresses interest in buying apartments in the city. We've revived the city. Our activity to keep the prices realistic is a healthy means of social cooperation for legitimate consumer purposes."

Arviv admits that there has been an inappropriate attempt on the part of the city's extremist secular elements to turn the struggle political, but he claims that most residents of the city, including religious and traditional residents, are united in their concern regarding the change of the character of the city. Gesheid, for his part, claims that in the decades of the presence of the Gur Hasidim in the city they never protested the secular lifestyle and never tried to force their opinion on anyone. "We've never protested outside of shops selling pork in the city or blocked cars driving on the Sabbath. We seek to live our lifestyle quietly, and expect others to respect it. We've never resorted to violence and we play only by the democratic tools available to every citizen of the country."

Ben Hamo said, "Arad won't have a right to exist if 40% of its residents would be Gur Hasidim. I have no problem with the ultra-Orthodox, I only have a problem with this group." Ben Hamo declared war, saying, "I'll block the Gur Hasidim from coming here. They don't have nursery schools here and I don't have an infrastructure for them. I told the minister of housing not to build apartments here for them. They should only build apartments without balconies for the sukkot huts, and multistory apartment buildings that are not suited for the ultra-Orthodox [who do not use regular elevators on the Sabbath]. Arad has a secular character, and as long as I'm here I'll do everything to make sure it doesn't change."