The story of Esti Weinsten, who fled the very strict Gur Hasidic sect and later committed suicide, has shaken and enthralled both secular and Orthodox Israelis. 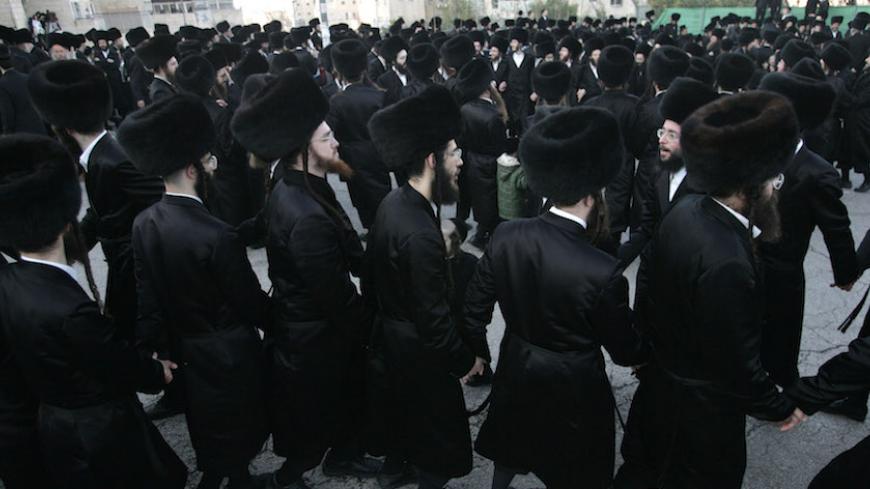 Ultra-Orthodox Jews dance outside a synagogue during a wedding in Jerusalem, Feb. 27, 2007. - REUTERS/Yonathan Weitzman

One must admit the truth: Reading the book by Esti Weinstein, a former adherent of Gur Hasidism who committed suicide in June after long years of separation from her ultra-Orthodox daughters, is exhausting and sometimes boring. From a purely literary angle, as prose “Do As He Wills” is an immature text. If it weren't for the sensational, tragic story behind it, it likely wouldn't attract many readers. This unusual tragedy is also the reason that many weeks after the text circulated on the internet free to everyone, large and renowned publisher Kinneret-Zmora-Bitan decided to publish it as nonfiction, edited by Shmuel Rosner. The story of Weinstein's life and suicide has enthralled Israelis.

Eight years ago, Weinstein left the Gur Hasidim, an ultra-Orthodox sect whose strict and forbidding regulations seem truly extreme to secular Israelis. Upon leaving the sect, Weinstein's ties with six of her daughters were severed because they remained Hasidic. Her one other daughter, Tammy Montag, left the sect, and ultimately saw to the publication of her late mother's text. Weinstein's separation from her daughters, enforced by the elders of the sect, led to her suicide, or so Weinstein's relatives claim. The Hasidim, who argue that they have been maligned in the media, contend that Weinstein abandoned her daughters and brought about her situation herself.

“We believe in the book,” Kinneret-Zmora-Bitan​ told Al-Monitor, “especially in light of its quick and immediate consumption by tens of thousands of people online, alongside the daughter's desire to fulfill Esti's will — that the book be brought to the awareness of the religious and secular public.”

Weinstein's text underwent very light editing and proofreading, and Montag wrote an introduction. “We published it as fast as possible, since the book and the event are in the public consciousness,” the publisher said.

“I truly hope that some kind of change will take place among this closed-minded Hasidism,” Montag said, “that people would read it and say 'I can't continue like this.' For those who left the sect, I hope that it would help with the difficulties they experience and with the separation from their families.”

Weinstein's book not only exposes the strict and difficult way of life under Gur Hasidism regulations, but also the distorted, violent and unbound sexual relations Weinstein had with her former husband, perhaps the inevitable result of the complete and compulsive control of Hasidic elders over the sex lives of the sect's members.

After Weinstein's suicide, Yisrael Greenhaus, a former Gur Hasid, published posts on Facebook describing the sect's rules for men and those for women. For example, two men cannot sit on the same bed. Two men can't be in a room alone. A man cannot touch another man. Men can't bathe at home, only at the ritual bath. Men can't use soap in the shower on weekdays, only on Sabbath eve. Men are not allowed to say the words “bride, woman, girl, young woman.” Meanwhile, women must cover their body according to strict rules, and they cannot touch a telephone. They cannot look a man in the eye, carry a purse, or receive a kiss or a hug from their father, and so on.

The protagonists of Weinstein's book, Dasi and Yaakov, who are thought to represent the author and her former husband, Shlomo, get engaged at age 17. They fail at their initial sexual encounters and live under the prohibition of men and women not looking each other in the eye. Ultimately, however, they cannot abide by the strict prohibitions on sex as prescribed by Gur Hasidism and end up acting with complete sexual permissiveness. In Weinstein's words, “We reached extreme situations that can't even be described! I'm sure that most secular Jews don't do things that we dared to do.”

Later, Yaakov crosses all boundaries and uses Dasi as an object to act out his sexual fantasies. He forces her to have sexual relations with another man in front of him and makes her life hell. She decides to commit suicide, but fails and is committed to a psychiatric hospital, as happened to Weinstein. Her rabbi forces her to return home. After a few months, she can't take it anymore, runs away and becomes secular.

The truth is that Gur Hasidism's regulations and the sexual price its members pay have been known for some time in Israel. In 2012, Haaretz published a two-part article about the sect that detailed the strict regulations that command the complete separation of men and women, including fathers and daughters, as part of a system of repressing sexual urges. Another Haaretz article revealed that the Hasidim dispense pills to repress members' sex drive. That same year, Yisrael Karol, a 26-year-old man who left the sect, committed suicide after allegedly suffering serial abuse meant to “return him to the path,” that is, to the Hasidim, including the forced use of psychiatric drugs.

A few days before Weinstein's suicide, a study by Nava Wasserman, “I Never Called My Wife,” was published in Israel and described methods of diminishing sexuality among Gur Hasidim.

Israelis' memories are short. Every time the public is exposed to what happens behind the closed doors of Hasidism, everyone is shocked and calls for change. Soon thereafter, however, both secular Jews and Gur Hasidim continue going about their lives as if nothing has happened. It seems that Weinstein's desire to leave a legacy of change relies on attracting secular voyeurism into an unknown bedroom.