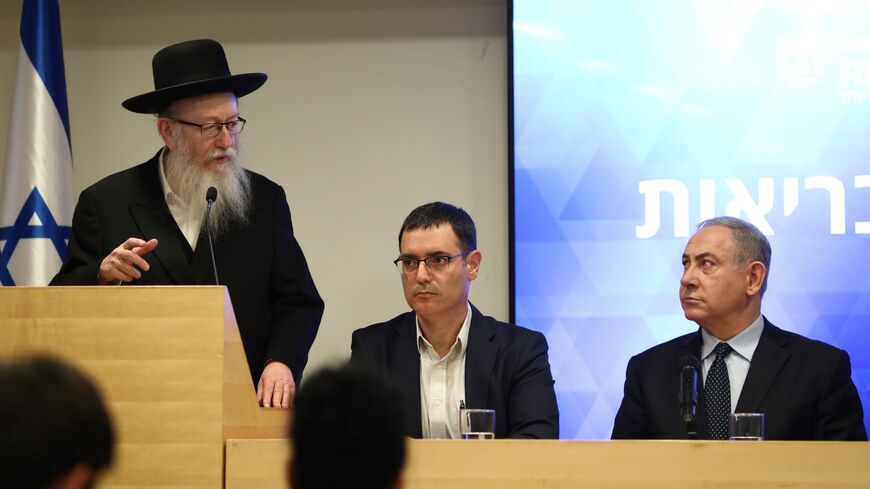 Then-Israeli Heath Minister Yaakov Litzman (L) give a joint press conference regarding preparations and new regulations for the coronavirus, on March 4, 2020. - GALI TIBBON/AFP via Getty Images

Israeli journalist Amit Segal revealed March 27 that a representative of the ultra-Orthodox community has been negotiating with senior members of the governing coalition for a political cease-fire between the government and the ultra-Orthodox parties in the Opposition.

"In recent months, the in-law of the Grand Rabbi of Gur — Yitzhak Shapira — held a series of meetings, both with [Foreign Minister Yair] Lapid and with [Prime Minister Naftali] Bennett's chief of staff, on a proposal for a truce: a six-month hiatus against anti-ultra-Orthodox legislation, especially concerning the kosher-telephone reform, which is so important for the Grand Rabbi of Gur. In exchange, the ultra-Orthodox will offer the coalition a political safety net," tweeted Segal.

The ultra-Orthodox parties have been part of many Israeli governments, both left and right, to protect their interests, including on the budgetary level. This has changed with the current government. Siding with former Prime Minister Benjamin Netanyahu, the ultra-Orthodox suddenly found themselves outside of the government.

The majority is fragile (61 Knesset members out of 120), so it would be natural for it to try to expand. Still, since its establishment last June, ultra-Orthodox politicians have repeatedly said they will not negotiate an entry into the coalition. In this case as well, ultra-Orthodox politicians denied the report, though sources in the community insist it is correct.

So far, it seems that negotiations were suspended because the Knesset is in recess and because Shapira demanded that cabinet ministers refrain for a certain period from criticizing openly ultra-Orthodox leadership.

What is most interesting is not the terms of the negotiations but the person leading them — a person who does not really bear an official title, but carries significant clout within Israeli politics. Recent reports say Shapira is the person most likely to replace ultra-Orthodox Knesset member Rabbi Yaakov Litzman, who announced last December he would not run again in any upcoming election.

New elections are not on the horizon yet, but Litzman’s announcement sent shock waves through ultra-Orthodox politics. He had served in the Knesset since 1999 and held several ministerial positions. For many years, Litzman has represented Gur Hassidut, the largest ultra-Orthodox faction in Israel, in the Knesset, but he was pulling strings already in the 1980s. Thus, his unexpected announcement opened the door for many rumors about his successor.

Most ultra-Orthodox observers are betting on Rabbi Yitzhak (‘Itchy’) Yehuda Shapira. But Shapira's personality and outlook are so different from Litzman's that it would generate a real earthquake in ultra-Orthodox politics and even beyond.

Shapira is an Israeli citizen, but he resides in London and conducts business in Germany. He also spends time in Switzerland and has an apartment in Jerusalem, though part of the time he lives with his family in Tel Aviv. He speaks seven languages. Many of his close friends are secular, and quite a few are affiliated with the Israeli left-wing. Traveling in many spheres, Shapira was given the Officer of the Most Excellent Order of the British Empire award in 2014, for strengthening the ties between the UK and the ultra-Orthodox community.

Shapira is also admired as a Torah scholar and is descended from a well-known Hasidic Schreiber dynasty. Recently, his granddaughter married the Grand Rabbi of Gur’s grandson. Both the Hasidim and the competing Lithuanian camp view him as one of their own.

Shapira’s father was the famous Avraham Yosef Shapira, who chaired the Knesset’s prestigious financial committee for many years. Thirty years after Avraham Shapira left the Knesset, the family home in Tel Aviv continued to serve as a magnet for government ministers, ambassadors, journalists and others.

Associates of Shapira believe this could change if he takes the lead. “Shapira is master of connections,” says one of his close friends, a former Labor member who spoke with Al-Monitor on condition of anonymity. “In his living room, you could find [late Prime Minister] Arik Sharon, when he was still a Likud member, sitting together with the higher-up Labor members, closing with them improbable political deals. I would say that Shapira is an expert in emphasizing the things we have in common, over those issues on which we disagree. … And all this with grace.”

These descriptions correspond well with the report about Shapira negotiating an entry into the coalition. But it is very different from the manner in which many ultra-Orthodox Knesset members operate. In most cases, they favor identifying the balance of power and forcing deals, rather than creating personal connections.

Shapira showed his ability to connect recently in the periphery city of Arad in the south of Israel, which houses a large community of Gur Hasidim. In recent years, the city’s mayor, Nissan ben Hamu, accused them of trying to change by force (of demography) the character of the city. The ultra-Orthodox community demonstrated against Hamu and conducted a fruitless legal battle against him. But after Shapira struck up a friendship with Ben Hamu about six months ago, things have been changing. At least for now, peace and quiet have returned to the city.