Ultra-Orthodox Health Minister Yaakov Litzman might not have Facebook or Twitter accounts, but through a series of nonpartisan reforms in the health system, he has managed to capture the hearts of both religious and secular Israelis. 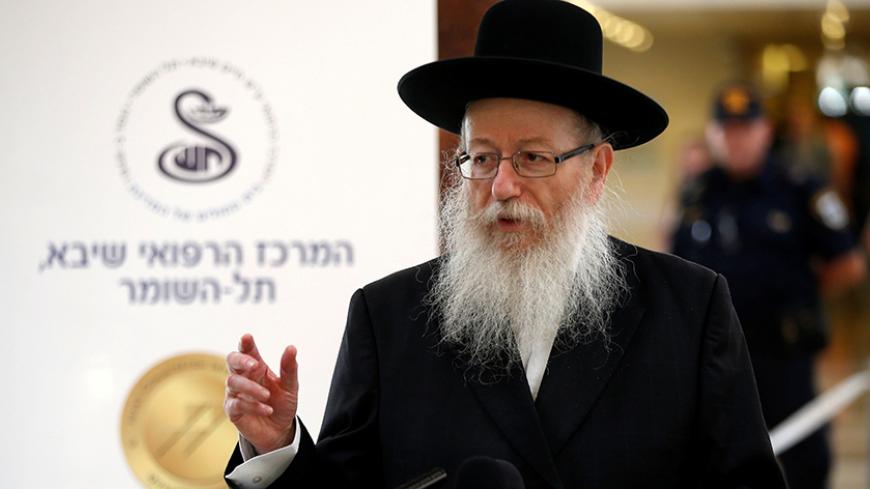 Israeli Health Minister Yaakov Litzman speaks during a briefing to members of the media on the medical condition of former Israeli President Shimon Peres a day after he suffered a stroke, at a hospital near Tel Aviv, Sept. 14, 2016. - REUTERS/Baz Ratner

For yet another year, Health Minister Yaakov Litzman, of the ultra-Orthodox Yahadut HaTorah, has surpassed all the other government ministers in the various popularity polls conducted by the major media outlets in their review of the Jewish year 5776.

In a survey released on Channel 2’s show “People,” respondents were asked to rank the performances of Israeli ministers on a scale of 1-10. Politicians with high public and political profiles like Prime Minister Benjamin Netanyahu, Shas chairman and Interior Minister Aryeh Deri, Culture Minister Miri Regev and Kulanu chairman and Finance Minister Moshe Kahlon found themselves at the bottom of the list, with scores ranging from 3.9 (Netanyahu and Deri) to 4.9 for Regev. Meanwhile, the ultra-Orthodox politician outshone them with 6.3, the highest score of all. By way of comparison, Likud Transportation Minister Yisrael Katz came in second with 5.9.

Katz, a very active minister, has been serving in that position for the past eight years. In that time, he has managed to implement a respectable list of infrastructure projects involving roads and railways. In contrast, Litzman has served as health minister for less than two years. And while Katz is a senior member of the Likud, the ruling party that won 30 seats in the last election, Litzman belongs to a relatively small party with just six seats. Furthermore, his party represents a sector that the general population — mainly secular but also traditional Jews — considers parasitical. Litzman’s own sector often provokes antagonism among the public, not least because its most extreme elements oppose the very idea of Zionism.

Litzman's popularity doesn’t look like a passing phase. Since August 2015, when he was appointed health minister in Netanyahu’s fourth government, Litzman has been named the most popular minister in all surveys, even among the secular population. Former Labor chair and Knesset member Shelly Yachimovich, for example, speaks of Litzman in superlatives, calling him her mentor and naming him as the one who taught her to be a good parliamentarian.

It is interesting to examine the Litzman phenomenon against the backdrop of populist politics in Israel and the growing use of social networks, the most prominent user in the government being Regev. How did a relatively older minister (Litzman is 68), whose accent combines Yiddish and English (he grew up in Brooklyn and immigrated to Israel at age 17), a man who does not surf the internet and continues to use an old-model cellphone instead of a smartphone, become such a popular figure?

The first thing to note is that Litzman differs from Deri, the leader of the Sephardic ultra-Orthodox party, in that he has proved that he is acting for the benefit of the entire country and does not practice political extortion or favor his own sector. He is responsible for a series of achievements that Israelis can feel in their day-to-day interactions with the health system. He increased the budget for medications by millions of shekels; reduced the long, frustrating lines for an fMRI; imposed control on once-scandalous prices in hospital parking lots and cafeterias; launched a campaign against junk food; introduced free dental care for children; and even advanced the reform of medical marijuana laws. The new laws, which were approved by the government last June, make it easier for patients to receive permission to use marijuana for medicinal purposes.

Litzman put everything he had into pushing these initiatives forward until they were finally approved. As a result, he figures prominently in the secular media. While Litzman himself does not have personal Facebook or Twitter accounts, he is well aware of the power of the media. He gives frequent interviews — and not only to the ultra-Orthodox press — and penetrated the hearts and minds of the Israeli public.

In every interview he gives, Litzman makes a point of focusing on issues concerning his own ministry, declaring that he is working on behalf of all the citizens of Israel. As it turns out, people respond well to this message. He may look like a diaspora Jew engaged in Torah study, but Litzman is a very shrewd politician. He functions like a well-oiled marketing machine, without looking like he is pushing himself into the headlines, setting one sector of the population against the other or legislating controversial new laws.

Litzman also makes a point of not discussing or even making references to diplomatic or security issues, claiming that they do not interest him. He doesn’t speak about issues concerning war and peace, even though they are core issues for the Israeli public. This, too, seems to be a well-considered choice. In his own sophisticated way, Litzman has so far managed to avoid this contentious political hurdle.

Although he is part of a very right-wing government and his own party is considered part of the right-wing bloc, Litzman has managed to play down this affiliation. As a result, people on both the right and the left find it easy to regard him as someone who represents them. He looks like a friendly grandfather and sounds like a spokesperson for everyone. He shatters the idea held by all too many politicians that their popularity corresponds directly to how extreme and controversial they are. In Litzman’s case, the exact opposite is true.

Above all else, however, Litzman differs from other politicians in that he does not have to appease his party’s central committee. The only person he answers to is the Gerrer Rebbe, the Hassidic rabbi who sent him to the Knesset. Yahadut HaTorah has been hovering around six or seven seats for years. That number is unlikely to change, as the party has a very clear constituency that will not vote for anyone else. This support frees Litzman up to do what he wants, effectively releasing him from any concerns about voter reactions. What this means is that while Litzman’s popularity has no electoral value, it has immense value in shaping the image of ultra-Orthodox Jews among the secular community.

Litzman's popularity as one of the most highly regarded politicians serving in the Knesset makes life especially difficult for Yesh Atid chair Yair Lapid. Litzman is unwilling to forgive Lapid for his “persecution” of the ultra-Orthodox when he served as finance minister and particularly for his fight to conscript the ultra-Orthodox in the Israel Defense Forces. So far, all of Lapid’s efforts to reconcile with him have been fruitless, with Litzman repeatedly giving him the cold shoulder. Recently, Litzman announced that despite the polls showing Lapid as head of the largest party, he “will not be prime minister.”

Litzman never misses a chance to mock Lapid’s efforts to draw closer to religion, and assures everyone in the Knesset that the ultra-Orthodox parties would never support a government headed by Lapid. This point could well make Litzman a key player after the next elections, as while Deri has made peace with Lapid, Litzman continues to reject him.