The Popular Mobilization Units are expanding their domination in Sunni-majority areas liberated from the Islamic State, raising concerns among the local population. 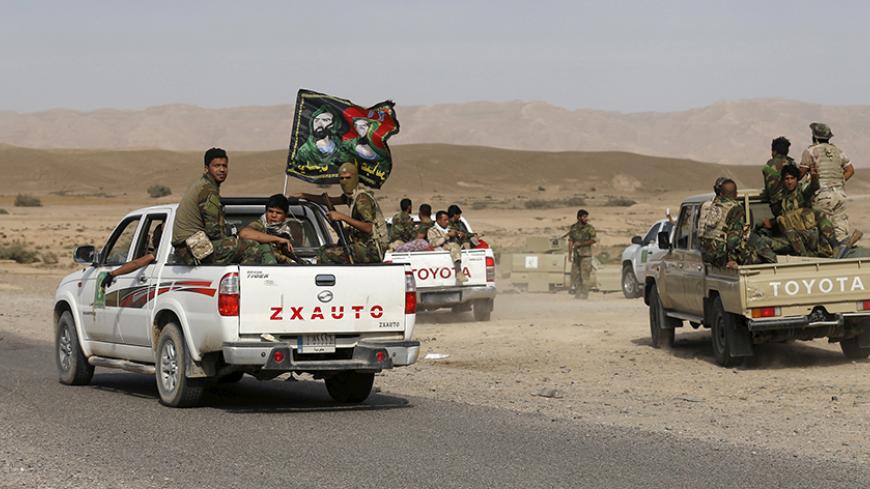 Shiite fighters ride on the back of a truck with their weapons in al-Fatha, Iraq, Oct. 18, 2015. - REUTERS/Thaier Al-Sudan

BAGHDAD — After the liberation of Sunni areas from the clutches of the Islamic State (IS), Shiite parties and their affiliated armed factions have established offices in those areas, despite not having a popular base there.

The Popular Mobilization Units (PMU) opened a bureau in the city of Fallujah on Jan. 16. Sunni journalists have expressed concern about this development, commenting that the PMU is trying to “a get a foothold in the liberated Sunni areas.”

Some media commentators are highly alarmed, warning that this step is a prelude to annihilating the Sunni identity. Jamila al-Obaidi, a parliament member for the National Iraqi Alliance, told Al-Monitor, “The PMU offices in the Sunni areas are politically motivated. It is an attempt to gain popularity in such areas in order to draw a new policy in the country in line with the aspirations of the [Shiite] parties in the liberated areas.”

In the Fallujah district, which was liberated a few months ago from IS, the PMU-affiliated armed factions are interfering in the work of the security forces stationed there, sometimes contravening the policies and efforts of the local police.

Mohammed al-Alwani, a citizen of Fallujah in Anbar governorate, was surprised to see the picture of a Shiite cleric hung on a wall near the office of an armed Shiite faction. “I don’t have any problem with Shiites as a community. They are my brethren. However, I do have a problem with their politics. I don’t know what the motives are behind these bureaus, which don’t have any supporters or followers in our city,” Alwani told Al-Monitor.

Some believe that Iran is seeking to expand its influence from the Shiite areas to Sunni ones through the PMU, gaining a foothold in more Iraqi cities as part of the rise of the political Shiite tide.

PMU spokesman Youssef al-Kilabi told Al-Monitor, “The opening of the resistance factions’ bureaus in the Sunni areas has nothing to do with the concept of political Shiism. The PMU is an official, lawful institution that represents all Iraqis. It is also a military institution as legitimate as the army, whose vision is not different from that of the government. The PMU was established to fight terrorism.”

On Dec. 21, 2016, some local police sources revealed to reporters on condition of anonymity that some PMU factions, including Hezbollah, the Badr Organization and the Ali al-Akbar Brigade, planned to open three official bureaus in the liberated districts of Ramadi and Fallujah, affiliated with Anbar governorate.

Salem al-Issawi, a member of parliament for Anbar, told Al-Monitor, “The existence of armed factions’ bureaus in the Sunni areas is a provocation and a politically motivated step that would benefit no one.” He added, “I do not know what the purpose is of opening bureaus for political parties that do not have wide popular bases in the Sunni areas. All this could aggravate the security and social situation in the Sunni areas.”

Despite the Sunni residents’ dissatisfaction with these bureaus, some local residents revealed to Fath News that they are being established according to the wishes of some tribal leaders and dignitaries who requested a PMU presence in the Sunni areas to help maintain security.

The PMU has already established at least 10 offices in the past few months in Ramadi, Fallujah, Saqlawiyah, Ratba and Haditha.

In the cities of Tarmiyah and Taji, north of Baghdad, the PMU factions opened bureaus ostensibly to maintain security in the areas that were liberated by these forces. The moves suggest that more bureaus will open in other areas where the PMU took part in the liberation operations.

According to Issawi, all this could further escalate tension in these areas, though some believe that the PMU is a lawful official institution that has the right to be present where it deems appropriate. It could be a risky venture for armed factions that were once accused of committing human rights violations and of being affiliated with Iran to build a presence in Sunni areas. However, their presence may be justified by local forces' inability to protect the lands and maintain security.

Preserving security in the liberated Sunni areas will not be easy. While the locals are demanding that their own forces take care of security, the PMU is insisting on extending its influence and taking control of the situation. These new offices could themselves be attacked or boycotted by Sunni locals, destabilizing the areas rather than securing them.