Will US keep military bases in Iraq after IS?

The Iraqi prime minister's recent visit to the United States indicates both parties are interested in maintaining a US presence in Iraq after the Islamic State is forced out. However, Iran-backed militias strongly oppose the idea. 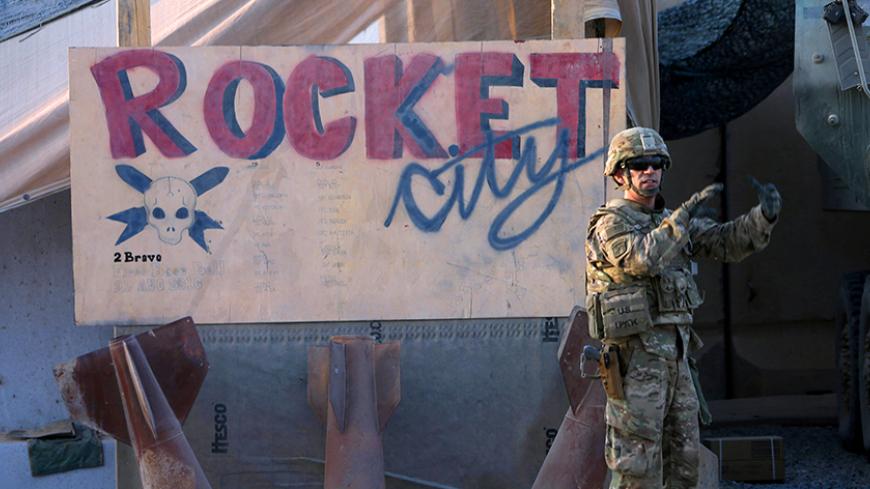 An American soldier is seen at the US Army Base in Qayyara, south of Mosul, Iraq, Oct. 25, 2016. - REUTERS/Alaa Al-Marjani

The subject of whether US troops should remain in Iraq once the Islamic State (IS) is defeated in Mosul is raising questions and fueling controversy among Iraqis.

On March 26, the Iraqi government officially announced it favors the idea of some US forces staying. Prime Minister Haider al-Abadi said in a Fox News interview that he supports retaining enough US troops to support Iraqi forces in a post-IS Iraq.

"We are concentrating on training, logistical support, and intelligence cooperation and gathering; these are three important elements for which I think we need some US troops to stay in Iraq to continue the task," he stated.

It appears that parliament's Security and Defense Committee has information that work has already begun on some US bases. Committee member Majid al-Gharawi told Al-Monitor, "The US troops, present in Iraq in rising numbers each day, are meant to stay in Iraq." Gharawi, a political representative of the Sadrist movement, not surprisingly opposes the idea. "American forces in Iraq will be met by resistance at the hand of Iraqis. Any foreign military presence on Iraqi soil will not be tolerated," he said.

Jaafar al-Moussawi, the spokesperson for Sadrist movement leader Muqtada al-Sadr, concurred. He said, "Any continued presence of foreign forces in Iraq, whether they are American or not, without agreement by the Iraqi parliament is considered an occupation. Hence, it will face resistance by the Sadrist movement or the rest of Iraqis, as the movement's stance on a US presence hasn’t changed."

Before his interview on Fox, Abadi wrote a piece in The Washington Post March 23 saying he had met with US President Donald Trump earlier in the week. "My country needs more help from the US," he wrote. "President Trump and I discussed how to build upon the Strategic Framework Agreement our two countries signed in 2008."

Trump hinted March 20 that he intends to keep US forces in Iraq even once IS is gone. When asked whether the United States should withdraw from Iraq, he told journalists, "We should never have left."

A thousand US troops — and more from the international coalition — are based in Qayyara military air base near Mosul. There are indications these troops might remain in a post-IS Iraq.

Khalaf al-Hadidi, a Ninevah city council member, said the United States is very interested in the Qayyara area, about 56 kilometers (35 miles) south of Mosul in the Ninevah governorate, which is seen as a possible US alternative to Turkey's Incirlik Air Base. In a statement, Hadidi said, "US forces are constructing another base at the Mosul Dam. However, it is not as big as the Qayyara air base. Work is underway, and we expect that Washington will have influence [in the matter], particularly in Ninevah."

Hisham al-Hashimi, an Iraqi analyst and writer specialized in security affairs, told Al-Monitor there are about 8,400 US soldiers in northern and western Iraq at regular and temporary bases, which include Qayyara, Hamam al-Alil, Erbil, Dahuk, Sulaimaniyah, Kirkuk, Ayn al-Assad, Rabia, Habbaniyah, Halabja and the Baghdad International Airport. However, "All the places where US troops are present cannot possibly be called bases, but rather camps, as they do not use runways except for Baghdad International Airport," Hashimi noted.

Ammar Hikmat Baldawi, deputy governor of Salahuddin, confirmed to Al-Monitor that US troops intend to stay longer at bases in Balad and Tikrit in his governorate, and al-Mansuriya base in Diyala governorate.

It seems that Sunnis and Kurds welcome the idea of US troops remaining in the post-IS stage, as some believe that's the only way to reduce Iran's Shiite influence in Iraq, and that of the armed groups supporting Iran. They see US troops as a means to control security and neutralize the rampant proliferation of weapons and militias in the country.

Iraqi Kurdistan might become the region with the largest presence of US bases in Iraq. It enjoys a safe environment where there is little if any political or social disapproval of America's presence, unlike many Iraqi governorates with Sunni or Shiite majorities, where armed factions and militias consider American presence an occupation.

However, some local governments outside the Kurdistan Region also support the idea of the keeping the US military bases, especially in unstable areas, to maintain security and prepare the areas for investment and reconstruction.

"We support keeping the US forces in the military bases in the province under the Iraqi-US agreement in 2008, because this brings more stability to our province," Baldawi said. "We are even looking forward to the full activation of the agreement."

He added, "We appreciate the efforts of the international coalition led by the United States in supporting Iraqi forces in the liberation of our province and Iraq as a whole." Baldawi's province has witnessed cycles of fighting and violence since the United States invaded in 2003. Most of the province fell at the hands of IS in 2014, but is now under Iraq's full control.

Al-Monitor tried to determine the current stance of the Popular Mobilization Units (PMU) on the presence of US troops. However, the response by PMU security spokesman Youssef al-Kilabi was short and carefully worded: "The PMU is part of the Iraqi armed forces, and it holds the same stance as the Iraqi government." In the past, some PMU factions did not mince words.

Naturally, the following questions remain unanswered. First, will Abadi be able to convince his rivals and friends that US troops should remain in Iraq? Second, will allowing them to remain guarantee Iraq opportunities for stability and guard against a succession of crises? Third, if Iraq invites US troops to stay without consulting Iran, will Iran take actions to confront the troops?