The Iraqi army is no longer the strongest force in Iraq, making way for the possibility of conflict between various armed groups. 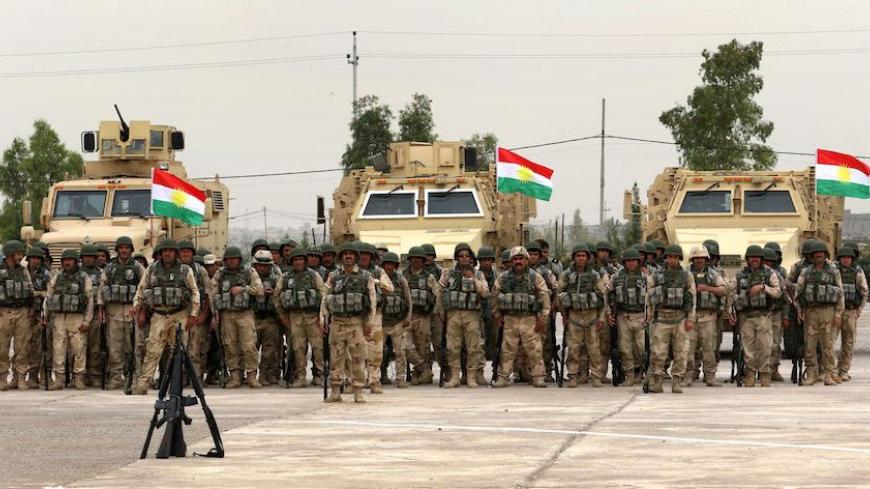 Kurdish peshmerga fighters show their skills during a graduation ceremony at the Kurdistan Training Coordination Center of Erbil, the capital of the autonomous Kurdish region of northern Iraq, May 5, 2016. - SAFIN HAMED/AFP/Getty Images

BAGHDAD — The military protocol agreement signed July 12 between the Iraqi Kurdistan Regional Government and the United States might create controversy in Iraq’s public and political circles, especially those that do not have good relations with the United States and are preparing to fight US forces if they step on Iraqi soil. According to officials in Kurdistan, the agreement states that five US bases should be built in the Iraqi Kurdistan Region areas of Erbil, Atrush, Harir, Dahuk and Sinjar. Moreover, the United States vowed to pay the salaries of the Kurdish peshmerga for 10 years, although this has not been confirmed by any US party.

Perhaps this agreement will give the peshmerga more autonomy and international legitimacy, but at the same time it might create problems with its counterparts in Iraq such as the predominately Shiite Popular Mobilization Units (PMU) and the Sunni tribal forces. The agreement will allow the peshmerga to equal the Iraqi army in strength and might provide it with more arms and develop it further in the future. During the liberation of Iraqi areas, clashes broke out between the peshmerga and forces from the Iraqi army and the PMU, the last of which was in April in Tuz Khormato.

The PMU that are close to Iran have increased in number and become better equipped, and they are almost on par with the Iraqi army. They enjoy huge influence in Iraq that might be greater than that of the Iraqi army. However, the tribal forces that constitute the Sunni version of the PMU do not have the same impact.

Strategic expert Emir al-Saidi told Al-Monitor, “With the deteriorating political situation in Iraq, the heated conflict over political, social and economic issues, and the intersecting interests of international … forces, armed factions that were outside the national defense frame appeared. They had several names with underlying meanings like fighting the occupier, protecting cities and maintaining the political operations, among others.”

He added, “Some political forces are getting ready for the post-IS [Islamic State] phase and contemplating a strategic plan, either to divide Iraq into statelets or to announce the formation of regions or even secession. We will then witness clear conflicts among the armed forces and perhaps in their own ranks.”

Yahia al-Sunbul, a prominent tribal figure in Anbar province, said in a press statement June 14, “The [PMU] are now stronger than the Iraqi army. To be even more specific, the army and police are both under the control of the [PMU].”

On June 4, the Saudi Al-Arabiya channel broadcast a report showing US officials saying, “The constant weakness of the Iraqi army and reliance on armed militias [the PMU] allied with it might undermine Prime Minister Haider al-Abadi’s wide-scale efforts to expel IS and gain the support of other Iraqis.”

Some people expect the PMU to be stronger than the Iraqi army and to emulate the Islamic Revolutionary Guard Corps. The presence of such a competitive large force undermines the work of the army and its movements.

Military expert Majed al-Saidi told Al-Monitor, "The post-IS stage will be marked by several armies in Iraq: the regular army, the [PMU], the peshmerga and Sunni tribal forces. The government should be able to control them, and they should not violate the Iraqi state’s law or fight each other.”

He added, “The Iraqi National Guard draft that should have united all armed groups under one command supervised by Iraq’s Ministry of Defense was not approved due to political disputes. Therefore, the presence of three armed forces with the Iraqi army undermine its influence.”

It seems that the conflict between the armed groups has already started, and they are competing with the army for presence on the ground. On May 26, Maki al-Nazzal, a prominent Fallujah figure, said in a press statement, “The disputes between the Sunni tribal forces and the [PMU] culminated May 25 when the latter burned houses after looting them upon the advance of Iraqi troops in the Shahabi area north of the city.”

The Sunni regions now have several armed forces such as the Sunni tribal forces fighting in Anbar and Salahuddin alongside the Iraqi security forces, the National Mobilization Forces that are preparing for the Mosul battle led by former Ninevah governor Atheel al-Nujaifi, and the recently formed Ninevah Forces. This plurality might create a conflict among armed Sunni groups.

The Iraqi army is no longer the only armed force in Iraq. The Kurdish peshmerga is handling security in the Iraqi Kurdistan Region and other disputed areas. The peshmerga has fought with the Iraqi army many times in disputed regions on the administrative borders between the federal Iraqi government and the Iraqi Kurdistan Region. The PMU are handling security in the south of Baghdad, while the Sunni tribal forces will take control of the liberated regions.

Nobody knows the fate of those armed forces after IS. Will they fight with the Iraqi army over the control of the security situation in Iraq, or will they be part of it?