Saudis hopeful but wary about Trump

Saudi Arabia is hopeful in regard to the Trump administration's views on Iran and closer counterterrorism and military cooperation, but remains wary on other policy issues. 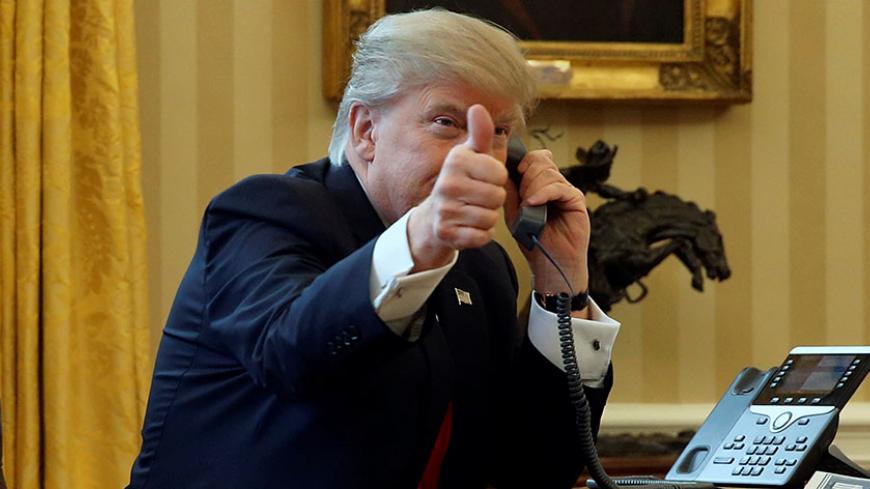 US President Donald Trump gives a thumbs-up to reporters as he waits to speak by phone with Saudi Arabia's King Salman bin Abdul-Aziz Al Saud in the White House, Washington, Jan. 29, 2017. - REUTERS/Jonathan Ernst

Saudi Arabia's royals are watching the new US administration with a mixture of hope that President Donald Trump will be the answer to their fears concerning their rival Iran, but also with deep but unspoken concern that the new administration will cause them serious trouble.

Saudi media have trumpeted the hour-plus phone conversation between King Salman bin Abdul-Aziz Al Saud and Trump on Jan. 29. Well-connected journalists say that the call will lead to closer counterterrorism and military cooperation. They stress that the two leaders agreed that Iran is the state threatening regional stability and highlight that Trump's top advisers also view Iran as the problem in the region in contrast to what they perceived as efforts by former President Barack Obama to make Iran part of the solution to regional tensions. Without endorsing Trump's travel ban on seven Muslim countries, behind the scenes the Saudis are undoubtedly quietly pleased that it has at least caused Iran to retaliate with a ban on Americans visiting Iran. More friction and sanctions will be welcome in Riyadh, especially adding the Islamic Revolutionary Guard Corps to the US list of terrorist organizations. The two leaders apparently also agreed that the Iranian nuclear deal must be rigorously enforced but not abandoned.

The Saudis are pleased with Trump's call for safe zones in Syria. Riyadh wants Washington to be much more involved in Syria, especially in fighting Iran and Hezbollah. The Saudi government does not want Syrian President Bashar al-Assad and his Russian and Iranian allies to prevail and remains wedded to the Sunni opposition. The Saudis blame the Muslim Brotherhood and al-Qaeda for having turned legitimate Sunni opposition into extremism. Given the Saudis' years of support for the Muslim Brotherhood in Syria and their tendency to arm any Sunni group fighting Assad, no matter how extreme, this is a somewhat incongruous reading of history.

Salman has not been as virulent about the Muslim Brotherhood as his predecessor, King Abdullah, but the royal court is now welcoming talk of listing the group as a terrorist organization. The Saudi readout of the call says that the two leaders noted that Osama bin Laden had allegedly been a member of the Muslim Brotherhood, which led to his extremist orientation. So al-Qaeda is the fault of the Brotherhood even though al-Qaeda despises it. Bin Laden's close ties to the royal family in the 1980s were of course airbrushed from the narrative.

There is considerable nervousness behind the scenes at the palace. The Saudis have obviously noted that many Americans argue that the kingdom should have been included on the list of seven temporarily banned countries whose citizens will be subjected to “extreme vetting.” After all, 15 of the 19 hijackers from al-Qaeda's 9/11 attack were Saudi citizens who had successfully obtained visas to enter the United States. Hundreds of Saudis are today fighting with al-Qaeda and the Islamic State. A ban on Saudis traveling to the United States would be disruptive for many Saudi families, and the royal family would be caught between their American allies and an angry domestic constituency. This is an outcome that the royal family is determined to try to avoid, but it is out of their control.

The Saudi crown proclaims itself the Custodian of the Two Holy Mosques in Mecca and Medina and the champion of Islamic peoples everywhere. The Islamophobic rhetoric of some administration supporters is worrisome to the Saudis. Trump's phone call with Salman has not relieved the Saudis' deep apprehension about this matter. They know American public opinion is tilting against them. More questions about why Saudi Arabia is not included in the extreme vetting process is only a matter of time.

There is also concern about whether the US Embassy in Israel will be moved from Tel Aviv to Jerusalem. The Saudis have been encouraged by hints that Trump might be yet another American president who backtracks on the embassy issue, but they know they cannot yet be confident in this regard. Jerusalem is a core issue for the Saudis, and moving the embassy will not go down well in Riyadh.

Yemen did not get much attention during the phone call aside from vague references to safe havens. The Saudis want unambiguous US support for their war there, but they are also looking for an honorable way to end their nearly two-year-old military intervention. The Saudis and their coalition partners have recently made modest progress on the ground along the Red Sea, but the Houthi rebels are far from defeated, and Iran is happy to fight to the last Yemeni.

The Saudis have not rushed to visit Washington. That is not their style. King Abdullah rebuffed President George W. Bush's desperate requests for a summit for more than a year because of his irritation with Bush's tilt toward Israel. Abdullah let Obama come to him in 2009 rather than visit the White House. No doubt the court noted that King Abdullah II of Jordan got only a meeting with Vice President Mike Pence, on Jan. 30. That is fine for the Hashemites, but not the Saudi royal family.

Like everyone else, the Saudis are watching to see how the power centers in the new administration evolve. Defense Secretary James Mattis is a known quantity from his CENTCOM days, and the designated secretary of state, Rex Tillerson, is familiar to them as former CEO of ExxonMobil. The CIA is a longstanding back channel for the kingdom, and its new director, Mike Pompeo, will be expected to visit Riyadh early in his tenure. Crown Prince Mohammad bin Nayef has dealt closely with every CIA director since George Tenet.

The Saudi system — already stressed by low oil prices, regional conflicts and a generational change in the line of succession — now faces new challenges in the kingdom's oldest alliance. Since 1943, strong ties to the United States, even when under pressure as in 1973, have been the royal family's critical foreign anchor.