Has Israeli left given up on two states?

Israel’s left no longer preaches for coexistence, dialogue or reconciliation, and focuses only on separating the two peoples through unilateral measures. 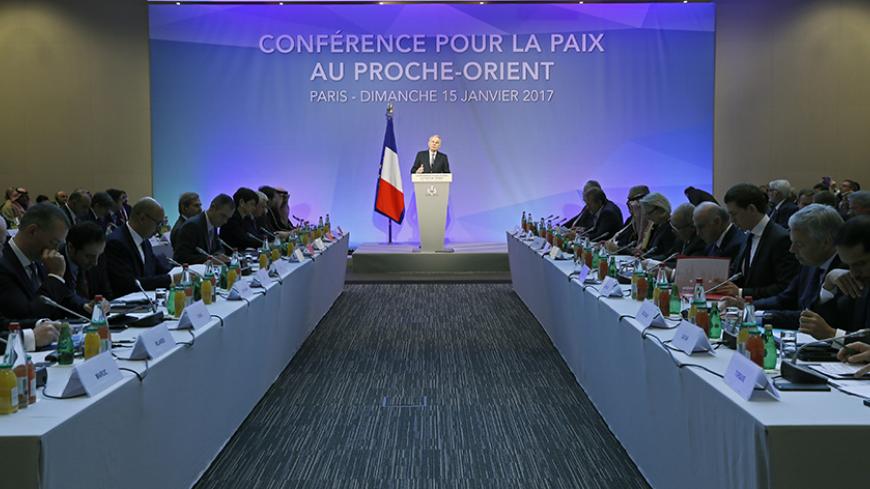 Prime Minister Benjamin Netanyahu’s familiar voice blared from the car radio in the noon hours of Jan. 15. “The conference convening today in Paris is useless,” the prime minister opined. On the roadside rose a giant, colorful billboard showing protesters carrying Palestinian flags captioned, in Arabic, “Soon we will be the majority.” Those wishing to find out who is behind the campaign of billboards lining roads throughout the country and ads filling newspaper pages are invited to call a speed-dial number.

I called the number. I listened to the recorded message and was persuaded that Netanyahu was right. The international conference in Paris designed to jumpstart Israeli-Palestinian peace talks was indeed futile. But not because, as the prime minister claimed, the views expressed at the conference hardened the positions of the Palestinians and distanced them from the negotiating table. The recorded message persuaded me that the conference did not contribute to peace and to reviving the moribund negotiations, because the Israeli peace camp had given up the fight even before the conference started.

The white flag of surrender (giving up on coexistence) is riding high above the new campaign initiated by well-known peace activists, who joined together under the auspices of a group calling itself Commanders for Israel’s Security. By waiving this flag of surrender, by warning Israelis of a majority of Arabs, they are telling participants of the Paris conference that even the mainstream of the Zionist left in Israel does not support their diplomatic road map for an agreed-upon permanent arrangement between Israel and the Palestinians, under the auspices of the Arab world and with the support of the international community.

“Soon we will be the majority,” a man says in Arabic on the recorded message. He repeats the words in Hebrew, with a heavy Arabic accent. Then comes the voice of Maj. Gen. Amnon Reshef, who heads the organization of some 250 senior retired defense officials. “Angered by Palestinian ads?” he asks. “I am too. But these are just ads. In a few days they’ll be gone.” And then comes the crux — a sentence designed to generate xenophobic sentiment that has nothing whatsoever to do with values such as peace, reconciliation, coexistence and fair dialogue: “What will not go away are the millions of Palestinians living in the West Bank,” Reshef goes on, and warns, “They want to be the majority here. If we do not separate from them, Israel will be less Jewish and less secure.”

And according to the Commanders for Israel's Security, who will decide where the separation line between Israel and the West Bank will be delineated? Israel alone. And who will decide how we separate from the Palestinian neighborhoods of East Jerusalem? As former Prime Minister Ehud Barak used to say, “We are here; they are there.” Israel, of course, will be the one that decides where the “here” ends and the “there” begins. And who will design the security arrangements in the areas that Israel vacates? Stupid question. Why do we have such a large army of retired defense experts, such as the former head of the Shin Bet security agency, Ami Ayalon? Yes, the one who in 2003 founded the peace-camp organization People’s Voice along with Palestinian professor Sari Nusseibeh, proposing negotiations on a two-state solution.

Senior former defense officials such as Israela Oron, Giora Inbar and Ilan Paz (members of the Commanders for Israel's Security) will also help us separate from the Palestinians who are scheming to “be a majority here.” Not only do they back the billboard campaign; their names are emblazoned on the 2003 Geneva Initiative, which laid out a permanent arrangement blueprint formulated together with senior Palestinian representatives. The list of the campaign supporters also includes former Mossad chief Danny Yatom, one of the heads of the Israel Initiative group that sought to promote a regional peace arrangement. But now, everyone is in favor of unilateral moves.

A text message that arrived on my phone immediately after I heard the recorded messages directed me to the organization’s diplomatic-defense platform — a platform that is practically the opposite of the final communique of the Paris Conference. Thus, for example, the blueprint formulated by the Commanders for Israel's Security proposes “an Israeli initiative independent of the existence of a partner” on the Palestinian side. The Paris Conference, on the other hand, calls on Israelis and Palestinians to assume the role of partners and launch serious negotiations. The joint declaration also demands both sides avoid unilateral steps that could dictate the results of negotiations on the core issues of a permanent arrangement.

Not only that, the conference encourages the start of a dialogue between Israeli and Palestinian civil societies. But in order to promote understanding between the sides, the Commanders for Israel's Security are turning the 2.5 million human beings in the West Bank living next to us Jewish Israelis into a threatening mass of Arabic speakers. Their plan contradicts in its essence UN Security Council Resolution 2334 that is mentioned several times in the Paris declaration. The resolution, adopted 14-0, demands that all countries differentiate between the territory of the State of Israel and the territories it has occupied since 1967. Namely, do treat equally (as illegal settlements) both "settlement blocs’’ and "isolated settlements.’’ The Commanders for Israel's Security, on the other hand, make a difference between the "blocs’’ located west of the separation wall, which according to their viewpoint should stay under Israel’s control, and (isolated) settlements on the east side of the fence, which should be evacuated.

They do explain, however, that they are proposing a temporary arrangement until the time is ripe for a permanent one. The 1995 Oslo II Accord, granting Israel full control over an area designated “C” that accounts for 60% of the West Bank, was also a temporary arrangement set to expire within five years. The tens of thousands of Israeli settlers who have since moved to Area C, and the various Israeli political initiatives to annex that area, have taught the Palestinians that as far as Israelis are concerned, there’s nothing more permanent than the temporary.

On the radio news Netanyahu was heard saying that the Paris Conference was one of the “last twitches of yesterday’s world.” With a most obvious reference to the impending change of power in Washington, Netanyahu promised that “tomorrow’s world will be different — and it is very near.” In looking at the giant billboards of the Commanders for Israel's Security, we seem to be witnessing the final twitches of yesterday’s Israel. Gone is the Israel where hundreds of thousands took to the streets 35 years ago to protest their government’s role in the massacre committed by Arabs on Palestinians in Lebanon’s Sabra and Shatila refugee camps. If we add to the platform proposed by the Commanders for Israel's Security and the support of Knesset members from the left-leaning Zionist Camp and the centrist Yesh Atid Knesset faction for the impeachment without trial of Arab Israeli Knesset member Bassel Ghattas, Israel’s tomorrow will look worse — and this tomorrow (beware) is very near.