Israel Ignores the Outreached Hand of the Arab League

The Arab League summit in Doha reaffirmed its 2002 peace initiative but, as Akiva Eldar writes, Israel is totally indifferent. 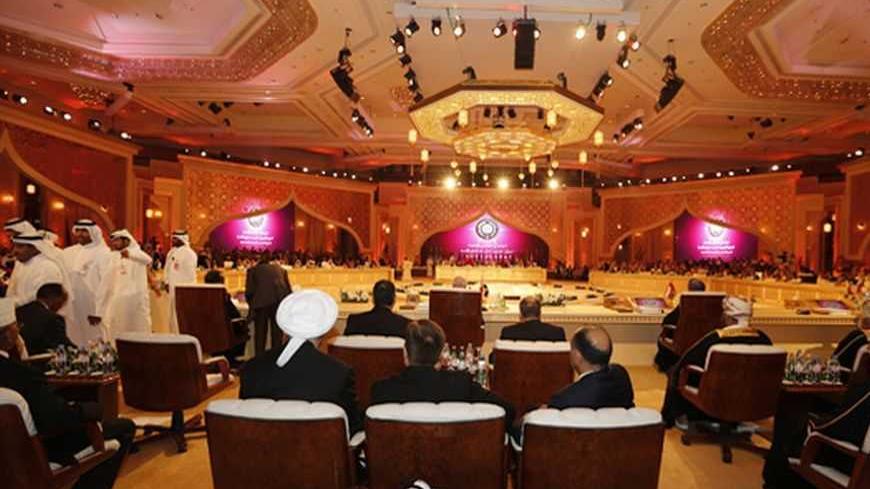 Leaders from Arab states are seen attending the opening of the Arab League summit in Doha, March 26, 2013. - REUTERS/Ahmed Jadallah

Syrian President Bashar al-Assad’s army, opposition fighters and offshoots of al-Qaeda are turning Syria into a network of cemeteries and ruins; Lebanon is collapsing under the weight of hundreds of thousands of refugees arriving from its bleeding neighbor; the regime of Egyptian President Mohammed Morsi is hanging on by a thread; in Saudi Arabia, King Abdullah lies on his deathbed; and Shiite Iran is stirring this boiling cauldron.

Amidst this commotion, the leaders of the Arab states who convened on March 26 in Doha, the capital of Qatar, took the time and energy to address the diplomatic freeze in Israeli-Palestinian negotiations, the occupation and the settlements. As it does annually — despite the upheavals besetting the region — the Arab League summit made sure to reaffirm its peace initiative of March 28, 2002. And, as they do annually, Israel’s political echelons ignored the Arab leaders’ historic peace plan. The summit’s decision to send a special delegation to Washington in April to discuss ways of kick-starting the stalled negotiations, did not elicit any reaction, either.

It is no surprise that the ratification of this regional peace plan and the Arab League’s interest in promoting the two-state solution are being received with such a cool welcome; since the start of the Arab Spring, Prime Minister Benjamin Netanyahu has been using the regional instability as a reason, or excuse, to entrench himself in a holding position on the Palestinian front and focus on the Iranian arena. And now, even though the Arab Peace Initiative is the product of pre-Arab Spring regimes, the leaders of the new regimes have again affirmed their peace plan, for the second time since the outbreak of the revolutions in the region. The initiative, which proposes that Israel relinquish the territories it captured in 1967, and in return enjoy normal relations with all the Islamic states, has become one of their anchors.

Middle East scholar, Dr. Matti Steinberg, who has been researching the initiative for years, poured over dozens of pages of Doha summit decisions and found no reference to the issue of the Right of Return — the one that deters most Israelis. The reference to the refugee issue is done so in passing, in reference to the Arab initiative, according to which the solution must be just and agreed upon, based on UN Resolution 194 (which refers to the return of the refugees to their places of residence and the restitution of their property). Steinberg stresses that in the announcement summing up the previous summit, held last year in Baghdad, the right of return was specifically mentioned alongside the Arab initiative, and so, too, in the announcement of the Islamic summit, which was held in Cairo last September (and quoted Resolution 194). One can thus infer that the Arab League delegation will focus its discussions in Washington next month on the territorial issue and will try to talk the US administration into forcing Israel to present its own map for a permanent arrangement. It marks the first time that the Arab League will conduct official talks with the United States about a solution to the Israeli-Palestinian conflict as part of a regional arrangement.

The new US Secretary of State, John Kerry, has on his desk a proposal to replace the bilateral negotiations between Israel and the Palestinians with a multilateral platform. Acceptance of the Arab initiative as the basis of a permanent arrangement between Israel and its neighbors will enable the renewal of the multilateral channels established following the 1991 Madrid peace conference on the issues of regional security, refugees, water and economic and environmental development. Parallel to the start of negotiations between Israel and the Palestinians, and as part of the regional initiative, the sides will agree that following the establishment of a stable regime in Syria, the new regime will be invited to renew negotiations based on the principles of the initiative. The negotiations with Lebanon, which began in Madrid, will also be renewed.

Acceptance of the Arab initiative’s principles, as the basis for a permanent agreement on the Israeli-Palestinian conflict, will enable gradual progress toward the final stop. This, according to the course laid out on the road map of the Quartet (which will mark its 10th year of existence in April), which was also unanimously adopted as a Security Council resolution (1515). The road map [introduced by President Bush in 2002] states that agreement reached in negotiations between Israel and the Palestinians will be based, inter alia, on the initiative of Saudi Arabia's Prince Abdullah approved at the Arab League summit in Beirut that calls for the acceptance of Israel as a neighbor in the region, living in peace and security, within the context of an overall agreement. The road map also states, “This initiative is a vital element of international efforts to promote a comprehensive peace on all tracks, including the Syrian-Israeli and Lebanese-Israeli track.”

Negotiations with the Palestinians under the auspices of the Arab League and the Organization of Islamic States, which includes Turkey, could make it easier for the Benjamin Netanyahu government to enlist support from the public and its coalition partners for significant steps, such as recognition, in principle, of a Palestinian state, gradual transfer of lands in the West Bank to the sole responsibility of Palestine and passage of a bill concerning “eviction and reparations” for residents of the settlements east of the separation barrier. The government would be able to present these steps as the first stage of a regional peace plan, supported by the United States and the rest of the international community. On the other hand, Israeli willingness to adopt the Arab initiative as a framework for negotiations, to recognize Palestine and to hand it lands, will help the United States put pressure on Saudi Arabia and other Arab states that do not maintain relations with Israel in order to accelerate steps toward normalization.

The Arab summit in Doha illustrates that the new Arab regimes, like the ones that preceded them, regard resolution of the Palestinian issue as the key to strengthening their legitimacy. As far as they are concerned, the way to solve the Syrian problem and to prevent it being turned into a base for Iran or global jihad runs through Ramallah and Jerusalem.