If Prime Minister Benjamin Netanyahu were interested in peace, he would have a Knesset majority to back him and at least six options to pursue. 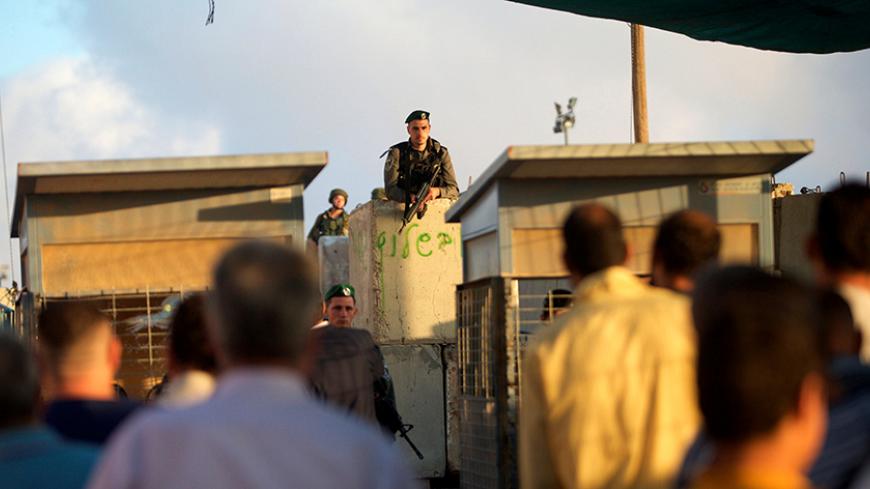 Israeli border police officers stand guard as Palestinians wait to cross through the Qalandia checkpoint to make their way to attend the first Friday prayer of the holy fasting month of Ramadan at Jerusalem's Al-Aqsa Mosque, near the West Bank city of Ramallah, June 10, 2016. - REUTERS/Mohamad Torokman

Anyone looking for a resemblance between the June 8 shooting attack at the Sarona market in Tel Aviv and the mass shooting four days later at the gay nightclub in Orlando can find it in the worn expression “getting back to normal.” In Israel and the United States, this means the normal condolence calls, the usual visits to the wounded and condemnation of the killers, the routine mouthing of hollow slogans and incitement against the murderer’s peer group. It's back to the business of sipping coffee and lighting candles at the site of the disaster until the next attack.

In a speech after the Orlando massacre, US President Barack Obama said, “We have to decide if that’s the kind of country we want to be.” He then added, “And to actively do nothing is a decision as well,” a not-so-veiled reference to conservatives’ persistent refusal to limit the purchase and ownership of guns.

Israeli Prime Minister Benjamin Netanyahu is in a better position than Obama. Netanyahu has two options from which to choose: He can continue doing more of the same, meaning nothing, the results of which will be identical — that is, bereavement, despair and hatred — or he can take action. He can easily muster a solid majority in the Knesset to take action. If he cannot mobilize this majority within his ruling coalition, he can count on support from the opposition. That’s what Prime Minister Menachem Begin did when he agreed to the Israeli withdrawal from the Sinai Peninsulai in the early 1980s and Prime Minister Ariel Sharon did when he pulled settlers out of Gaza in 2005.

Those who say that the beaches of the Sinai Red Sea resort of Sharm el-Sheikh are not the same as the Tomb of the Patriarchs in Hebron, or that one cannot compare a Gaza settlement bloc to the Etzion settlement bloc in the West Bank, are right. Indeed, reaching a peace agreement between Israel and the Palestinians is way more complex than signing a peace treaty with Egypt.

It is highly unlikely that Palestinian President Mahmoud Abbas will ever agree to recognize Israel as the state of the Jewish nation, acquiescing to Netanyahu’s demand. This is implied in comments made June 5 by Maj. Gen. (Res.) Udi Dekel, who led the negotiation section in the Olmert government, at a conference sponsored by Tel Aviv University’s Steinmetz Center marking the publication of the following two books: “Chances for Peace: Missed Opportunities in the Arab-Israeli Conflict” by Eli Podeh and “Israeli Peacemaking Since 1967: Factors Behind the Breakthroughs and Failures” by Galia Golan.

Does the Palestinians' difficulty in reaching a permanent agreement, which requires compromises on territory and on Jerusalem, justify Netanyahu’s continued foot dragging and zero action routine? Dekel, who during his military service was in charge of issues related to Israel’s diplomatic arrangements and today serves as deputy director of the Institute for National Security Studies, is not content with a mere “no.”

In his assessment, Dekel spared no criticism of the political echelon, which he knows quite well, for ignoring the recommendations of the professionals in the defense agencies every time a recommendation involves the possibility that the politicians will be “accused of being soft on terror.” Such was the case with a recommendation to seek a “hudna”​ (truce) with Hamas and to ease the policy of granting Israeli work permits to Palestinian residents of the occupied territories.

Dekel is not the only one claiming that the status quo is an illusion and that the mantra that time is on Israel’s side is an eyewash. There are many who agree in the defense establishment and Foreign Ministry. At a June 7 debate in the Knesset’s Foreign Affairs and Defense Committee, Sergio della Pergola, a demographer and professor, said that Jews constitute a bare majority of 52% in the area between the Jordan River and the Mediterranean Sea, but that this could change in the coming decade, with an increase in the Palestinian population. If one excludes from the 52% those Israeli citizens who are not recognized as Jews under strict Jewish law — mainly immigrants from the former Soviet Union who were not born to a Jewish mother, but were entitled nonetheless to Israeli citizenship — the Jewish majority has already been wiped out.

I don’t know a single person in the military or diplomatic arenas who believes that sitting around and waiting for the next terror attack is Israel’s sole and best option. Dekel warned that the diplomatic options open to Israel today could be closed tomorrow. He has no doubt that an agreed upon solution in negotiations on the establishment of a Palestinian state alongside Israel is the most desirable goal. Unfortunately, the political forces on both sides are unable, or unwilling, to reach agreement on all the core issues and end the conflict. He therefore suggests leaving the door open to a permanent agreement and in the meantime try other options instead of the current terror routine and the erosion of Israel’s Jewish character and democratic nature. The options are as follows:

Option one: Present the Palestinians at the outset with a reasonable framework for a permanent arrangement — one, for example, based on the Clinton Parameters or the Olmert proposal, and not ignoring understandings reached in the past. At best, this could enable the resumption of negotiations and improve the prospects of success. If not, in a worst-case scenario, Israel would at least score important points in the international arena, and pressure would grow on the Palestinians to soften their positions.

Option two: Abandon the approach that “nothing is agreed on until everything is agreed on” and strive instead for agreements on the relatively easy issues (land swaps and security arrangements) while carrying out moves on the ground, such as changing the status of parts of West Bank Area C (under Israel’s defense and civilian control) to Area A (Palestinian defense and civilian control) and evacuating illegal settlement outposts, a designation established under the Oslo Accord.

Option three: Promote the 2003 road map, including its stipulation of a freeze on Israeli settlements and recognition of a Palestinian state within temporary borders, for example, along the route of the separation fence.

Option four: Unilateral Israeli withdrawal to the line of the separation fence, based on a quiet agreement between the two sides and coordination of the handover of territories from which Israel would withdraw.

Option five: Opening negotiations with the Palestinians within the framework of the 2002 Arab Peace Initiative and a regional peace arrangement with the leading Arab states.

Option six: Israeli unilateral disengagement from the West Bank, including, according to Dekel, the evacuation of some 120,000 settlers living outside the main Jewish population settlement areas in the West Bank.

“The worst option,” Dekel said, summing up his presentation, “is fear of taking risks in order to achieve one’s goal.” Albert Einstein has been attributed with saying that doing the same thing over and over and expecting different results is insanity. So is a “return to normalcy” without understanding that the next tragedy is already lurking down the road.