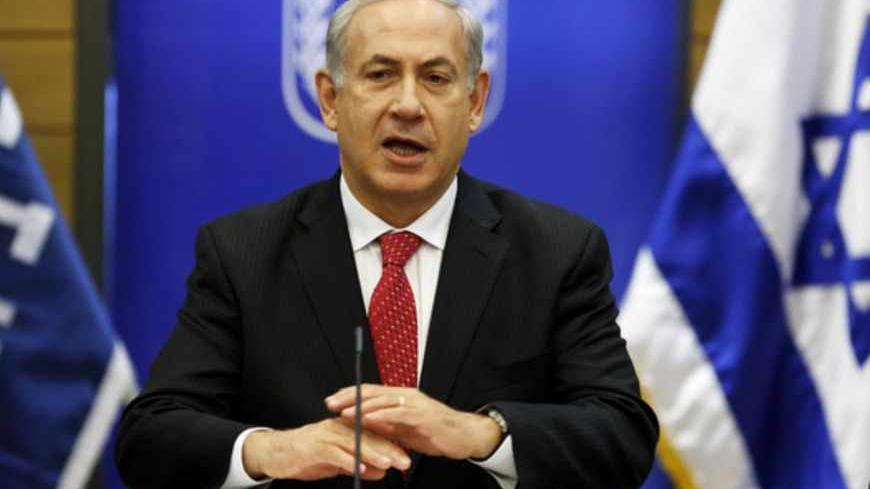 Israel's Prime Minister Benjamin Netanyahu gestures as he speaks during a Likud party meeting at the Knesset, the Israeli parliament, in Jerusalem, April 22, 2013. - REUTERS/Baz Ratner

The April 30 announcement by Qatari Prime Minister Hamad bin Jassim Al Thani that the Arab states agree in principle to a land swap between Israel and Palestine, based on the 1967 border lines, failed to stir any particular excitement among Israel’s top political offices. That is a natural reaction, given the views of those leaders — it’s obvious they cannot trade sovereign Israeli territories for other territories that they also regard as their own and call “Judea and Samaria,” despite the fact that the rest of the world defines them as “occupied territories.” This is a non-starter. Even a child understands that in order to trade stamps with a friend, both of them have to at least agree that each is the proprietor of his own collection. As far as Israel is concerned, it owns most of the other side’s stamps, as well.

In a previous article, I noted that Prime Minister Benjamin Netanyahu strenuously objects to recognizing the June 4, 1967 lines as a basis for discussion from which to launch negotiations on mutual exchanges of land. His stand is deeply rooted in the revisionist worldview on which he was raised and educated.

Zionist Revisionism espoused a diplomatic struggle alongside a military one as a solution to the problem of the Jewish exile that was to culminate in the establishment of a Hebrew state in the Land of Israel along both banks of the Jordan River. Netanyahu is thus part of a school that believes Israel already made a major historical compromise when it declared independence 65 years ago: it gave up its right to sovereignty over the east bank of the Jordan. This school of thought rejects the internationally accepted Palestinian approach, which contends that the Palestinians adopted a compromise 25 years ago when they gave up their demand for a state in all of Palestine and recognized UN Resolutions 242 and 338. Those resolutions, which essentially call for Israeli withdrawal to secure and agreed-upon boundaries, define the 1967 borders (known as the Green Line) as the "peace lines" between Israel and the Arab states. In doing so, they leave the Palestinians with no more than 22% of the land of Palestine as it was defined under the British Mandate (the land between Jordan and the Mediterranean).

When negotiations on a permanent arrangement between Israel and the Palestinians began at Camp David in the summer of 2000, the Palestinians responded favorably to the Israeli-American proposal to alter the 1967 boundaries in a way that would enable Israel to annex the large settlement blocks in the West Bank. After it became public knowledge that Palestinian President Abu Mazen (Mahmoud Abbas) had reached understandings in 2008 with then-prime minister Ehud Olmert regarding an exchange of territories, the Arab League and the the Organization of Islamic Cooperation still reiterated their unequivocal support for the Arab Peace Initiative. Even the major turmoil in the Middle East, including the rise to power of the Muslim Brotherhood in Egypt, did not change the Initiative.

The land-swap arrangement is essential, not just as a precondition for negotiations but also as the sole formula for bridging differences between the sides over the issue of territory. It will enable Israel’s leadership to say it did not go back to the 1967 borders, as well as allow the Palestinians to say they did go back to them. For all intents and purposes, rejection of a land exchange is a rejection of a permanent settlement between the sides. This is why Hamas strenuously objects to land swaps. Paradoxically, the biggest revisionist of them all, former prime minister Menachem Begin and one of Likud's founders former prime minister Ariel Sharon were the ones who approved the interpretation of Resolution 242 as requiring Israeli withdrawal from the lands it conquered in the 1967 Six Day War — to the very last meter. Their interpretation is derived from their respective decisions to withdraw from all of the Sinai and Gaza Strip.

Also ironic is the fact that while the Arabs have been focusing only on the 1967 borders, Netanyahu keeps bringing up issues relating to the 1948 problem. This is the reason he insists in all of his speeches that Palestinian recognition of Israel as a Jewish state is a precondition for negotiations. Just this week, in a meeting with the Foreign Ministry, he stubbornly reiterated that “the root of the conflict with the Palestinians is not the West Bank settlement of Yitzhar; it’s the Israeli cities of Haifa, Acre, Jaffa and Ashkelon.” He elegantly ignores the fact that Abu Mazen officially asked the United Nations to recognize a Palestinian state within the bounds of the 1967 borders and subsequently said in a television interview that he wants to go back to his family’s home in the Israeli town of Safed — but only as a tourist.

The desire Netanyahu expressed at that meeting “to reach an arrangement with the Palestinians that would preclude Israel becoming a bi-national state, yet would provide it with stability and security” is no more than a regurgitation of the Bar-Ilan speech he made four years ago (which has since proven to be a bunch of hollow words). This time, too, Netanyahu refrained from mentioning the Palestinians’ inherent right to self- determination. When he talks of security, Netanyahu means complete Israeli control over the Jordan Valley. For the sake of clarity, the area of the Jordan Valley constitutes a third of the UN Resolution-granted territory the Palestinians claim between the Mediterranean Sea and the Jordan River. In fact, Netanyahu’s impractical stance is moving Israel closer to the day it has to choose between two options: becoming a bi-national state or an apartheid state.

The willingness to exchange lands, expressed after the meetings of the Arab League delegation in Washington with US Vice President Joe Biden and Secretary of State John Kerry, is a step forward. But it’s not surprising. The Palestinian willingness to trade lands on the eastern side of the Green Line for territory within Israel had the Arab League's support from the very start, in 2002. As far as the Islamic states are concerned, as long as Abu Mazen doesn’t consider waiving sovereignty over the holy Muslim sites and handing the Jews control over Haram al-Sharif (the Temple Mount), he is entitled to exchange territory to his heart’s content. On the other hand, Netanyahu is adhering to the 2003 decision of the Sharon government, of which he was a member, rejecting the Arab Initiative. In fact, one of the 14 conditions the government attached to its May 2003 decision to adopt the Bush-era Road Map, states that Israel “rules out any response to the Saudi Initiative and the Arab Initiative.”

But with all due respect to the Israeli-Palestinian conflict, the fruitful cooperation between the United States and the Arab League is designed to achieve a far greater goal: the latest upheavals in the region have created a joint interest for the United States and the Sunni states: blocking the Iran-Syria-Hezbollah axis and strengthening Jordan, as well as preventing al-Qaeda’s penetration into the Sinai, Gaza Strip and West Bank. The Obama administration believes that a diplomatic breakthrough on the Israeli-Palestinian front, on the basis of the Arab Initiative, could supply the glue for a new regional alliance.

This approach enables Israel to enjoy immediate defense dividends, even before it is forced to make a single territorial compromise. Israel will be able to arrive at a two-state solution based on a broad consensus among all the Arab states regarding core issues. But time is not on Israel's side. The Arab League delegates hinted to their interlocutors in Washington that if diplomatic progress is not achieved within six months, the Arab League will withdraw its initiative. This will seal the tiny remaining crack in the window of opportunity for a peace agreement.

Sadly, only two Israeli government ministers saw fit to respond to the Qatari prime minister’s declaration — Justice Minister and HaTenua Party leader Tzipi Livni and Science Minister Yaakov Peri of the Yesh Atid Party. Peri, who served as head of the Shin Bet security agency (1988-1995), is one of the founders of the nonpartisan “Israeli Peace Initiative” movement, which for the past two years has been working to promote a regional approach to the Arab-Israeli conflict. Will these two be the only ones?