The overlapping Israeli-Palestinian talks with negotiations between the West and Iran might offer a hint as to what really motivated Prime Minister Netanyahu to return to negotiations. 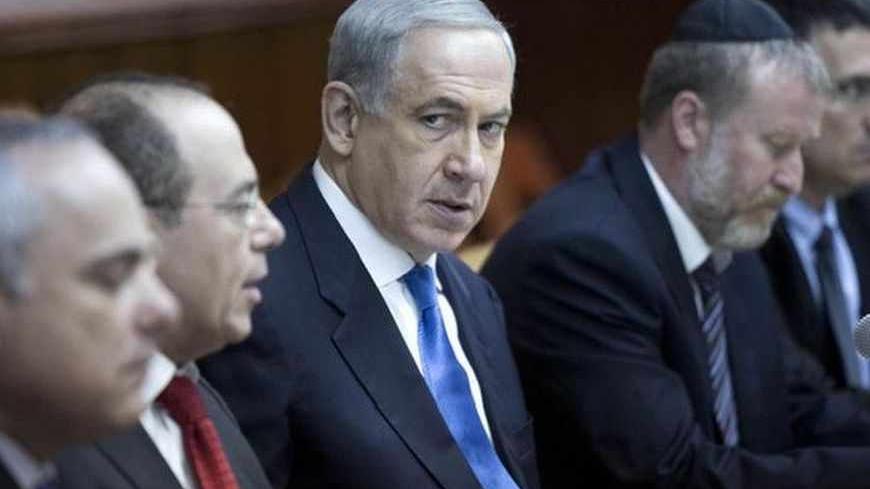 If Prime Minister Benjamin Netanyahu were asked how he wants history to remember him, he would never say, “as the leader who brought peace to Israel,” nor would he answer, “as the person who settled Jews throughout the Land of Israel.” How deeply etched in his consciousness is the challenge of preventing Israel from becoming a binational state — a topic which, it should be noted, has started popping up in his speeches recently? It is still too hard to tell. Regardless, even the threat of losing Israel’s Jewish majority and its democratic character has no chance of competing against the one item that tops the list of Netanyahu’s anxieties: his fear of a nuclear holocaust.

Netanyahu wants history to remember him as nothing less than the man who saved his people from annihilation. This is the source of all his positions as the head of government, of all his diplomatic maneuvering and of all his internal political double-dealings. It is also the source of the overlapping timetables for this week's renewed negotiations with the Palestinians over a permanent arrangement and the negotiations channel for an arrangement with Iran to put an end to the nuclear threat hovering over Israel.

US President Barack Obama realized that only a death sentence, set out in the form of a final deadline for the Iranian nuclear program, without any trickery or chicanery, could convince Netanyahu to pay the cost in Palestinian currency. A very blatant hint that these two channels were related was provided this week on July 29 by Defense Minister Moshe Ya’alon during a visit to a military base. Ya’alon, an ardent advocate of managing rather than resolving the conflict, explained that ''There were many strategic considerations” behind the decision to renew the negotiations and release Palestinian prisoners, and that these “might yet be revealed in the future.”

A date nine months from this July passes over the next meeting of the UN General Assembly, to which the Palestinians have threatened to appeal in the event of an American failure. In the spring of 2014, the clouds may open up, offering a convenient opportunity for American or Israeli jets to fly over Iranian airspace.

Last week on July 22, I promised that if US Secretary of State John Kerry succeeds in leading the parties to an agreement by following the same path taken by his predecessors, I would happily eat my hat. All the evidence seems to indicate that my hat has been spared. While it is still too early to assess the results of Kerry’s efforts, it can already be determined that he is trying to lead the negotiations along a new route, and not one that crosses paths with the Iranian nuclear issue.

Over the last four months, Kerry spent more time in Jerusalem, Ramallah and Amman than his predecessor, former Secretary of State Hillary Clinton, did during her entire four years in office. By doing so, he signaled to Netanyahu and Palestinian President Abu Mazen (Mahmoud Abbas) that he has no intention of letting go of them until they finally comply, and that their refusal to do so comes with a cost. To make it easier for Abu Mazen to put aside his threat of turning the conflict into an international affair, Kerry has brought the Arab League on board and provided the Palestinian leader with a regional safety net. A delegation from that organization was welcomed in Washington with open arms, and then went on to provide its seal of approval to the possibility of an exchange of territories.

Kerry recognized the importance of releasing Palestinian prisoners, considered to be freedom fighters by their own people, and insisted that the Israeli decision in the matter should be made before the resumption of negotiations. All the commotion around whether the Green Line should be the basis of negotiations was nothing more than a red herring. It was only introduced into the game so that its removal would make it easier on Netanyahu to get his government to approve his decision to release dozens of “hard-core” prisoners. Everyone with the least bit of common sense realizes that the reason that the bride and groom are now standing under the wedding canopy is so that they can discuss the fate of the territories that Israel occupied in the 1967 war, and that when they talk about large blocks of settlements, they don’t mean the Tel Aviv region.

All of the agreements and documents signed by Israel since the Camp David Peace Accords of 1978 are based on United Nations Security Council Resolution 242 from November of 1967, which calls for the “withdrawal of Israeli armed forces from territories occupied in the recent conflict,” and not the conflicts of 1948 or 1956. Even late prime minister Yitzhak Shamir, considered to have been the most right-wing prime minister Israel ever had, had accepted the invitation to attend the Madrid Peace Talks in 1991, where Resolution 242 was presented as the basis of negotiations between Israel and all the Arab parties. In 2003, former prime minister Ariel Sharon’s government approved the Roadmap to Peace (though then Finance Minister Netanyahu abstained), which determined that the permanent agreement “would put an end to the occupation which began in 1967.”

Both officially and publicly, Netanyahu is under no obligation to fulfill any understandings that his predecessors may have reached with the Palestinians, including their agreement that the West Bank and the Gaza Strip are occupied territories (though east Jerusalem is a different matter). Nevertheless, a senior Israeli official who is very involved in the diplomatic process told Al-Monitor that Kerry made one thing perfectly clear: It would be inconceivable to have Justice Minister Tzipi Livni and Netanyahu’s representative attorney Yitzhak Molcho begin their negotiations with the Palestinian representative Saeb Erakat from a starting point of zero.

The appointment of former ambassador Martin Indyk as Kerry’s representative to the negotiations was intended to ensure that this time around, the two parties will not waste their time flinging mud at each other. Like his predecessor Dennis Ross, the American-Australian-Jewish facilitator genuinely cares about Israel. Unlike Ross, however, whom the Palestinians consider to be an Israeli proxy (he was once described by his former deputy Aaron David Miller as “Israel’s attorney”), Indyk has acquired a reputation as a fair and impartial mediator.

If at the end of this nine months of pregnancy, Kerry will presents a two-state solution, Iran will be forced, one way or another, to let go of its ambition to become the second nuclear country of the Middle East after Israel, according to foreign sources.

In a referendum, the citizens of Israel will have to decide not only whether they prefer a bi-national state that is a pariah, and no peace whatsoever, over a Jewish democratic state accepted in the region and around the world. They will also face the difficult choice between living under the threat of the Iranian bomb and removing the heaviest shadow that has loomed over Israel since its foundation. It seems that Netanyahu has already made his choice.