Israel's new nationality law undermines its prospects of being a state like any other, with recognized boundaries, living in peace and security with its neighbors. 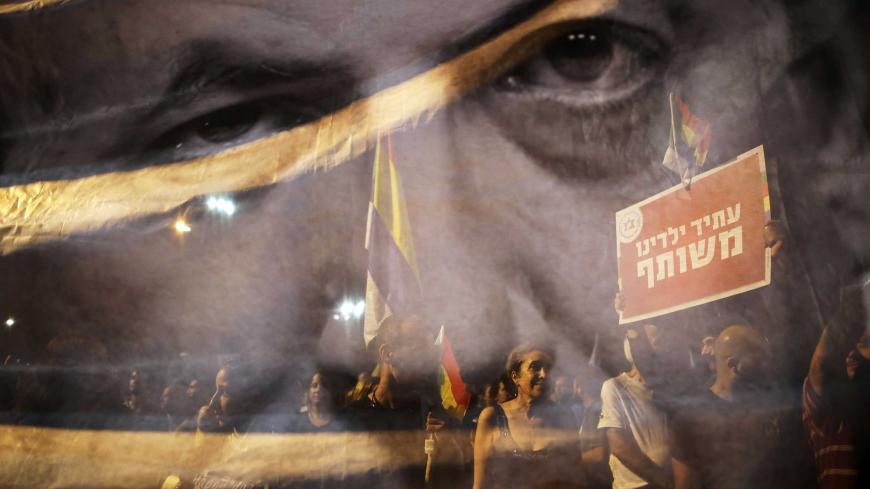 Israelis from the Druze minority, together with others, take part in a rally to protest against the Jewish nation state law in Rabin square, Tel Aviv, Israel, Aug. 4, 2018. The sign in Hebrew reads "The Future of our Children is shared". - REUTERS/Corinna Kern

The recently adopted nationality law, anchoring Israel’s Jewish character, has been challenged by numerous petitions against it. On Aug. 5, Justice Minister Ayelet Shaked delivered a chilling threat to the country’s Supreme Court, warning that a ruling overturning the law would be tantamount to an “earthquake, a war between the authorities.” Her words prompted a public and media storm, and rightfully so. Such a direct hit on the judiciary breaches a red line that even the radical right is wary of crossing. The law, which defines Israel as the nation-state of the Jewish people, threatens to cross other red lines, as well.

As Ron Skolnik wrote for Al-Monitor Aug. 9, the language of the legislation echoes a series of laws, regulations and declarations that pave the way in principle for Israel’s annexation of the West Bank. To be precise, the idea is to annex the land, not its non-Jewish inhabitants. Such action would truly be tantamount to a declaration of war on the Palestinians and the Arab world with a gross violation of international law and international agreements to which Israel is a signatory.

Critics of the nationality law have focused on the absence of a key word, “equality.” However, another no less important word is also missing: “boundaries.” The law states, “The land of Israel is the historical homeland of the Jewish people, in which the State of Israel was established.” Where does “the State of Israel” lie? Between the Mediterranean Sea and the Jordan River (including the West Bank), the area under Israeli control for the past 51 years, only 78% of which is under its sovereignty? The law goes on to say, “The right to exercise national self-determination in the State of Israel is unique to the Jewish people.” Do the Jewish people have the right to exercise self-determination in their historic homeland that lies, according to Jewish tradition, between the Euphrates and Tigris Rivers — in other words, in modern-day‎ Turkey, Syria, Iraq, Iran and Kuwait? Alternatively, perhaps the Jewish people should make do with the boundaries of British Mandatory Palestine, as secular right-wing Israelis demand? Does all this mean that the Green Line, which served as Israel’s de facto border until 1967, will be wiped out forever?

Still, the Supreme Court justices evaluating the petitions need not risk war with the executive and legislative branches of government. Instead of entering into the heart of this question, they should simply demand that the attorneys representing the government outline the borders of the state mentioned in the law. If they argue that the nationality law applies the laws of the State of Israel to all the territories under its control but not to their Palestinian residents, as is currently the case, it would sound the death knell of the 1993 Oslo Accord, and at the same time constitute victory for Hamas.

The agreement, which will mark its 25th anniversary on Sept. 13, says the goal of Israeli-Palestinian negotiations is a permanent arrangement between them based on UN Resolutions 242 and 338. The agreement, signed on the White House lawn in the presence of President Bill Clinton and Russian Foreign Minister Andrei Kozyrev, mentions implementation of these resolutions once again as the intended outcome of negotiations on a permanent arrangement.

In signing the agreement with the Palestinian side, the Israeli government confirmed that the territories from which the UN resolutions oblige it to withdraw include the West Bank and Gaza Strip, which it captured in 1967. Those claiming that the government of Prime Minister Yitzhak Rabin was wrong in agreeing to terms of the deal should peruse the George W. Bush administration’s Roadmap for Peace approved by the government of Prime Minister Ariel Sharon in 2004. Then-Finance Minister Benjamin Netanyahu was among those who voted in favor of the document, which includes several mentions of Resolution 242. According to the government decision at the time, “The future settlement will be reached through agreement and direct negotiations between the two parties, in accordance with the vision outlined by President Bush in his 24 June address.”

The problem is that contrary to the language of the nationality law, Bush, his predecessors, successors and institutions of the UN never recognized the State of Israel’s right to determine its borders based on historic affinity with the lands it conquered in 1967. On the contrary, the roadmap outlined by Bush states that Resolutions 242 and 338 constitute the basis for negotiations that would “end the occupation that began in 1967.” Israel therefore agreed that the territories beyond the Green Line are occupied lands, or at most part of the Jewish people’s homeland. Therefore, they are not part of the State of Israel and its laws do not apply there.

Even President Donald Trump, who has recognized Jerusalem as the capital of Israel, did not agree that Jerusalem, “complete and united,” as the nationality law says, is Israel’s capital. He underscored that the city's boundaries would be drawn with the consent of both sides, as will the boundaries of other territories under dispute. Nonetheless, Resolution 242 stresses that all sides deserve to live within recognized, secure borders. The safest way to agree on recognized borders was and still is diplomatic negotiations between Israel and the Palestinians based on the 1967 borders. A border, however, is not synonymous with a wall or a fence.

The founder of the Palestine Liberation Organization, Yasser Arafat, once told me in an interview that he did not rule out an Israeli-Palestinian confederacy. He could form one, the Palestinian leader added, one hour after the Palestinian people are allowed to implement their right to self-determination by establishing a state of their own between the Jordan River and the Green Line (the approximate borders of the West Bank). The nationality law states, “The right to exercise national self-determination in the State of Israel is unique to the Jewish people.” As previously explained, the law does not draw the boundaries of the state, but the Jewish majority in the Knesset advocates that Israel’s eastern border run along the Jordan River in any agreement with the Palestinians. That definition would strip millions of Palestinians of the right to self-determination and in any case render the confederacy idea moot.

Hundreds of thousands of Palestinian workers and business people cross the Green Line daily, and tens of thousands of Israelis, most of them Arab citizens, go in the opposite direction for business and pleasure in the West Bank. The Israeli shekel has served for decades as legal tender in the West Bank and Gaza. Israeli security officials hail the productive coordination with the security agencies of the Palestinian Authority. The nationality law, the rotten fruit of an arrogant and shortsighted worldview based on the rules of a zero-sum game, undermines Israel’s prospects of being a state like any other, with recognized boundaries, living in peace and security with its neighbors. To accomplish this, the Israelis must return to the path of the Oslo spirit, on which all sides are guaranteed winners and which zealots from both sides have destroyed. Every day, the children of Gaza and those of the Israeli town of Sderot across the fence are paying the price of the war these zealots are mongering.