While Israeli Prime Minister Benjamin Netanyahu and Egyptian President Abdel Fattah al-Sisi are discussing a Cairo regional conference, experts are presenting a security plan, based on the one elaborated by Gen. John Allen. 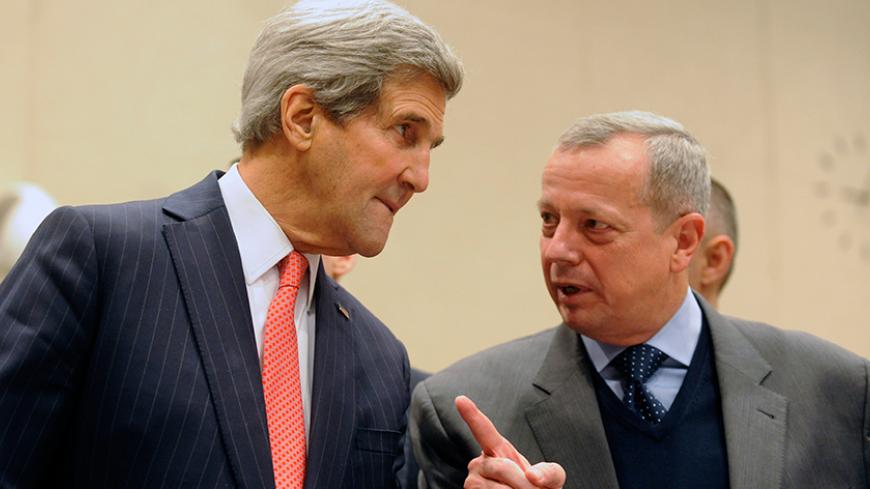 Retired Marine Gen. John Allen (R) speaks to US Secretary of State John Kerry prior to a roundtable meeting at the NATO headquarters in Brussels, Dec. 3, 2014. - REUTERS/Eric Vidal

After cutting off negotiations with moderate Zionist Camp leader Isaac Herzog and inserting Yisrael Beitenu head Avigdor Liberman into the government as defense minister instead, Prime Minister Benjamin Netanyahu picked up the phone to Egyptian President Abdel Fattah al-Sisi last week. As a reminder, it is no secret that Liberman hails from the most right-wing of the political map, at least at the moment.

There was great fury toward Netanyahu in Cairo, in light of the fact that the Egyptian president himself rolled up his sleeves in anticipation of international steps designed to jump-start the peace process, with the backing of 24 Knesset members of the Zionist Camp, on the failed assumption that Herzog will join the government.

Netanyahu, who boasts a close relationship and unprecedented security alliance with Sisi, informed the fuming Egyptian president that he, Netanyahu, stands behind every word of the understandings and promises that he dispensed in recent months. “Everything is still valid,” said Netanyahu, according to sources who were privy to the contents of the conversation and who spoke with Al-Monitor on condition of anonymity. When Sisi asked how it will be possible to implement all their plans with Liberman, Netanyahu answered, “He’s on. I spoke to him.”

A week later, in the third week of May, Housing Minister Gen. (Res.) Yoav Galant said, in a private talk with Jewish leaders in New York, according to a political source who spoke with Haaretz daily, “Government policy is not to build in Judea and Samaria.” Thus, for the first time, an Israeli minister in office admits to the de facto “quiet building freeze” in settlements that is taking place in the West Bank.

Nevertheless, this is not a full freeze since Agriculture Minister Uri Ariel from HaBayit HaYehudi has full control over the settlement division of the World Zionist Organization. And this organ, which operates as another governmental construction arm in the West Bank territories, does continue to build.

According to Western diplomats, Netanyahu had a two-pronged commitment to Sisi: to carry out acts on the ground that demonstrate Israel’s commitment to the two-state solution, and recognize the 2002 Arab Initiative as the de facto basis for negotiations, with the required "alterations." There is also a second side to this promise that, according to Netanyahu, is still valid: The Egyptians committed themselves, together with other Sunni states, to convene an international conference in Cairo that would jump-start the process — mainly renewal of the bilateral negotiations between the Israelis and Palestinians and turning the Arab Peace Initiative into a working plan.

This is the first time since the Arab Initiative was on the table that the Arab states are willing to integrate steps toward normalizing relations with Israel while simultaneously entering into negotiations without waiting for the conclusion of the negotiations. This is a dramatic development signaling the beginning of normalization of relations between Israel and Saudi Arabia, for instance, even before a permanent arrangement with the Palestinians is reached. Every Israeli step on the ground will be answered with an appropriate Arab step.

However, let's not forget that these plans at this stage are still on paper. Netanyahu has promised many things to many people in the past, but has never carried through. An initiative similar to the Egyptian one was made by the Saudis in the last two years, but Netanyahu ignored it. But when it came this time — from the direction of Cairo — Netanyahu hurried to pick up the gauntlet. No, it's not that he has changed; it’s just that reality is painting him into a corner. The international moves, the French initiative, the strong fears regarding what US President Barack Obama is capable of doing to him between the US elections in November and the new president's inauguration in January — all these have pushed Netanyahu to create the outward appearance of negotiations and progress, to survive the difficult period.

Another issue that will not make it any easier for him is the publicity that is expected to be released on May 31 regarding a new, inclusive defense program for peace in the Middle East. Many American and Israeli experts have been diligently working on the program in recent months. They also consulted with all the relevant sources, including Egypt, the Palestinians and the Jordanians. The new program will be presented at a special press conference by representatives of the authors, who led the entire process. On the Israeli side is Maj. Gen. (Res.) Gadi Shamni, former head of Central Command in the Israel Defense Forces (IDF), and additional high-level officers from the Commanders for Israel's Security movement, headed by Maj. Gen. (Res.) Amnon Reshef. On the American side is Ilan Goldenberg, who was Martin Indyk’s team leader on peace talks in 2013-14. Then there is Col. Kris Bauman, chief of staff under Gen. John Allen and former member of US Secretary of State John Kerry's team. In the latter capacity, two years ago he tried to create an American security program for Israel in the course of traumatic negotiations that led nowhere.

As we recall, at the time Allen was appointed to create defense solutions for Israel, which would allow the Israeli public to understand that it is possible to establish a Palestinian state without endangering the security of the Israeli state. The Americans stormed this mission with great seriousness, and Allen came to the region as head of a tremendous staff of 150 experts. At a relatively early stage, then-Defense Minister Moshe Ya’alon instructed the IDF officers not to cooperate with the American experts, not to contribute ideas and not to express their opinions. The Israeli security higher-ups were only allowed to listen.

Allen spent long months toiling over a comprehensive plan that was rejected by the Israeli security system. Until this very day, the Americans are convinced that the high-ranking IDF officers secretly were in favor of the Security Arrangements program, but that the political echelons and decision-makers, headed by Netanyahu and Ya’alon, forbade them to express this opinion. Meanwhile, Netanyahu and Ya’alon felt that this program would not provide proper security to Israel, should it withdraw from Judea and Samaria.

Allen’s security plan was never publicized. Sources told Al-Monitor on condition of anonymity that Allen reached many understandings with the Palestinians, and also the Jordanians. For instance, the Jordanians agreed that a Palestinian airport would be situated in their territory, so that the takeoff and landing runways would extend from Palestinian territory in the west, to end in Jordanian territory in the east, where checkpoints and custom duty services would be situated. Thus, Israel, which trusts the Jordanians, would be able to supervise the incoming and outgoing flights from this airport.

Now, after comprehensive headquarters work, US and Israeli experts upgraded Allen’s plans and turned it into the most comprehensive, thorough and creative plan ever consolidated for a peace arrangement between Israel and the future Palestinian state. The objective is to show the Israeli public the security options, to calm fears and to demonstrate how the scare tactics employed by the right in Israel — headed by Netanyahu, against an Israeli withdrawal from the territories — is exaggerated.

Publication of the program will be backed by a public relations campaign and promoted within Jewish organizations and the Israeli public. This security plan is supposed to back up any intentions of Netanyahu to take a sharp political turn from the right to the center to resuscitate the diplomatic process. How will such intentions be implemented by the most right-wing government that Israel has ever seen? That is already Netanyahu’s problem.