The declarations by Blue and White leader Benny Gantz in favor of perpetuating Israel’s occupation of the Jordan Valley are a cynical ploy to attract right-wing voters, but they erode his support for the two-state solution. 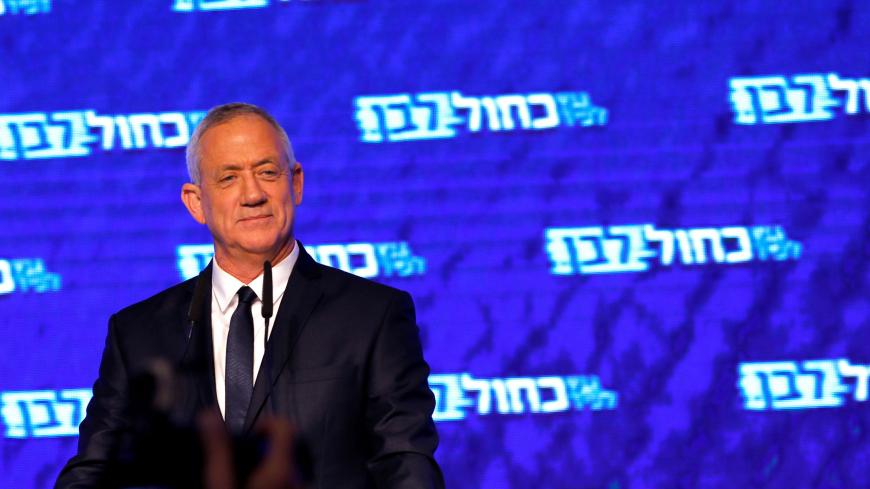 The head of Blue and White party, Benny Gantz, delivers a speech following the announcement of exit polls in Israel's parliamentary election at his party headquarters in Tel Aviv, Israel, April 10, 2019. - REUTERS/Corinna Kern

“I grew up on stories about the heroic pursuits of terrorists in the Valley,” Blue and White leader Benny Gantz tweeted following the highly publicized July 31 visit of his party leadership to the Jordan Valley. These days, Gantz is in pursuit of right-wing voters ahead of the Sept. 17 elections, declaring during his Jordan Valley tour that under any future agreement with the Palestinians, Israel would retain control of the strategically important, inseparable part of the country. A few days later, on Aug. 6, Gantz showed up in the Gaza border communities vowing “action to take down Hamas leaders” if necessary. With these comments, Gantz is trampling the principles that his party presented to the Israeli public, eroding his support for the two-state solution and undermining what little hope the Palestinians have of ending the Israeli occupation.

Let's imagine that Prime Minister Gantz “takes down” the Hamas leadership. Who will he “put up” instead to run the Gaza Strip? An Israeli military administration? Does Gantz perhaps hope that Egypt will embrace the 2 million Palestinian residents of Gaza? The only hope is for the Palestinian Authority (PA) to return to the enclave, but no levelheaded Palestinian leader would let Israel off the hook and deal himself with the deep crisis in the Gaza Strip unless Israel comes to an accommodation with the Palestinians on the future of the West Bank and East Jerusalem. The three generals at the helm of Blue and White — Gantz, Moshe Ya’alon and Gabi Ashkenazi — are well aware of this.

Comments by Gantz in April 2016 at a conference of the Institute for National Security Studies attest to the fact. “It is important to reach a diplomatic agreement with the Palestinians, otherwise we will keep sinking into this quagmire,” Gantz said. “Even if we do not succeed, we have to try. We may have to keep living by our sword, but at least we will be able to tell our children that we really tried.”

Ashkenazi, Gantz’s predecessor as military chief of staff and currently a Blue and White Knesset member, has made similar comments. In a September 2012 conference of the financial newspaper Calcalist, Ashkenazi said, “We must make every effort to reach a solution with the Palestinians even if someone has a problem with the partner,” calling on Israel to “make the two-state idea official” because it is essential for the state.

Blue and White leaders certainly mean to keep in any future agreement with the Palestinians Israel’s control of “settlement blocs’’ around Jerusalem and the town of Ariel. How, then, does Israel’s occupation of the Jordan Valley, which makes up almost one-third of the West Bank, in addition to control of the “settlement blocs,” fit in with the two-state solution? How is an understanding of the importance of a diplomatic arrangement for the future of our children compatible with Gantz’s pledge that if his party comes to power, it would strengthen the Jordan Valley, sell more land for housing, increase farming subsidies and develop a new urban area there?

How can one justify control over some 65,000 impoverished Palestinians living in the Jordan Valley, whose paltry huts are torn down time after time by Israeli authorities in order to preserve the predominant rights of slightly over 10,000 Jewish settlers? It is hard to believe that the former army chief is not aware of the theft of Palestinian land throughout the valley with the flimsy excuse that it serves “security needs.”

Col. (Res.) Shaul Arieli, one of the authors of the 2003 Geneva Accord, is convinced there will never be an agreement with the Palestinians unless Israel agrees to a Palestinian state on 22% of Mandatory British Palestine (meaning within the 1967 borders, with some land swaps). The Jordan Valley, he says, is almost the only land reserve where the future Palestinian state can settle the hundreds of thousands of Palestinian refugees who will seek to live in their state. The Palestinian Authority also plans to build an airport in that area.

Arieli, one of the leading authorities on the issue of Israeli security and borders, also rejects Gantz’s statement regarding the “tremendous strategic importance” of continued Israeli control over the land between the Jordan River and the Samaria mountains.

Speaking with Al-Monitor, Arieli said that from the moment the Palestinians agreed to disarmament of the West Bank and international monitoring (in negotiations with former Prime Ministers Ehud Barak and Ehud Olmert, as well as in the Geneva Accord), and committed not to sign military alliances with hostile countries and organizations, Israel had no need for the Jordan Valley. In his view, the strategic depth that Israel’s 1994 peace agreement with Jordan provides and the close security cooperation with it are far more important than control over the Jordan Valley.

A 2011 report by the Peace and Security Association, which represents hundreds of security experts, buttresses Arieli’s arguments. The document contradicts Gantz’s claim that “anyone who understands security, understands that the valley must remain an inseparable part of Israel.” The research team included Brig. Gen. (Res.) Shlomo Brom, former chief of the Strategic Planning Division of the Israel Defense Forces (IDF); former Military Intelligence head Maj. Gen. (Res.) Shlomo Gazit; former air force commander Maj. Gen. (Res.) Amos Lapidot; and Maj. Gen. (Res.) Nati Sharoni, former head of the IDF’s Planning Division. They summed up their report by saying that a permanent agreement with the Palestinians is preferable to the marginal profit of retaining control of the Jordan Valley. In their opinion, security arrangements within the framework of a permanent arrangement with the Palestinians would place Israel’s de facto security border in eastern Jordan.

The researchers believe the term “strategic depth” in the context of the Jordan Valley and the West Bank “makes a mockery of the term. With or without the Jordan Valley, Israel does not have strategic depth; it is only about 40 kilometers [25 miles] across, including that valley.” Thus, “guided missiles and rockets of various ranges … can reach any target in the State of Israel regardless of control of the valley." They also warn that any Israeli military force deployed in these areas “will suffer from topographical inferiority and will be vulnerable to fire from both west and east.”

The Peace and Security Association experts argue that right-wing settlement supporters repeatedly scare Israelis with doomsday scenarios lacking any logic regarding the rationale for holding on to the Jordan Valley, cynically exploiting Israeli fears for narrow political goals. It turns out that even a party that prides itself on its “centrist” positions (Blue and White) is not above using that same ploy for narrow political goals by cynically exploiting the stellar military reputation of its leaders.