Remnants of ancient church keep this family in Sebastia

Abu Abdullah volunteered to look after the remaining walls of St. John the Baptist Church in Sebastia, which he refuses to leave even though his family is the only remaining Christian family in the village. 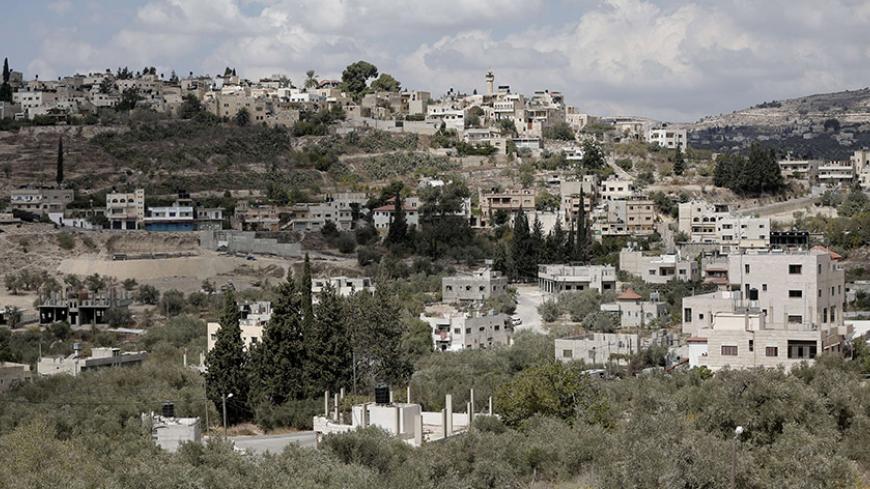 RAMALLAH, West Bank — Sami Said Debebne, also known as Abu Abdullah, lit up the Christmas tree at his residence Dec. 16 in Sebastia village, Nablus governorate, in the northern West Bank. This came one day after he, his wife and their three children attended the Christmas tree lighting ceremony in the city of Nablus, nearly 15 kilometers (9 miles) away from his village.

Debebne, 50, works as a secretary at the Rujeib elementary school for boys in Nablus. His family is the only remaining Christian family in Sebastia village, where 3,500 people live and which is rich in ruins.

Debebne and his family are spending the holidays in his wife’s birthplace, Zababdeh, where 3,000 Christians reside — two-thirds of its inhabitants. Zababdeh is 15 kilometers southeast of the city of Jenin, also in the northern West Bank. It is 45 kilometers from Nablus to Jenin.

Debebne is happy at Sebastia, where coexistence and strong social ties among the residents prevail. He told Al-Monitor, “Although we are the only remaining Christian family in the village, we live in peace. We do not feel that there are any sectarian conflicts or discrimination between Muslims and Christians.” He added, “My children are students of public schools at the village; they learn the Islamic curriculum, just as my brother and I did before. The inhabitants of the village congratulate me on the holidays, and I do the same on the Eid al-Fitr and Eid al-Adha holidays.”

Debebne’s parents have died and were buried at St. John the Baptist Church in the village. One of his brothers has been in Jordan since 1967, and the other one moved to Canada in 2000. His six sisters live with their families in different parts inside and outside of the West Bank. He is the only remaining member of the family in the village, and he opted to stay to preserve the family’s house, land and good social ties with the rest of the village’s inhabitants.

Debebne, who looks after the remains of St. John the Baptist Church, spends hours removing the dust, weeds and stones from its yard, and welcomes and guides visiting delegations. “The church dates back to the Byzantine era, nearly 1,600 years ago," he said. It was reportedly built where the head of St. John the Baptist was chopped off. Yet, with time, only a few walls remained.

Debebne‘s story with this church began in 1987, when he returned to the village after he had ended his university studies in Jordan. The first intifada also was ignited that year. He said, “Unidentified men broke the metal door to the room where St. John was beheaded, and stole the icons and images. I contacted the priest at St. Jacob Church in the city of Nablus, who told me to install a metal door and keep the keys. This is how I started looking after the church.”

In 2005, Debebne started working at the Education Ministry, which was another reason for him to stay in the village. He said, “This is where our land and home are. This is where I was born and grew up. I have very good ties with the people here. They are the ones keeping me here.”

He added, “Over the last five years, the number of church visitors increased. Some of the delegations came to pray; others to learn about its history.” He said that he has not obtained any sort of material assistance from the churches or Palestinian government parties.

Debebne said that some people are really annoying as they try to profit from selling — without permits — candles and souvenirs to visiting delegations, and that the room where St. John was beheaded has been without a door since April, as unknown men keep breaking it.

Although the Sebastia local council gave Debebne permission to look after the church, he said that there are unpleasant issues he and church visitors sometimes have to deal with; he said his way to the church is obstructed at times. He said there is only one person who causes him troubles, as this man and his children insist on disrespecting the sanctity of the place by making annoying noises during prayers. This occurs despite Debebne's having obtained from the Tourism Ministry a license establishing his right to be present at the church when delegations come. It should be noted that the church is located in Area C, which is under Israeli control.

Debebne demanded that the concerned parties in the Palestinian government, such as the Tourism Ministry, give him the right to protect the premises, given that the local council’s permission is not enough — particularly since the church is located in Area C. He said he made a request to be moved from the Education Ministry to the Tourism Ministry, which requires a certificate of good conduct from the Palestinian security services. Yet one of the services hampered the process. He said, “I have not received any assistance for the development of the premises. I want to protect and look after this place, to prevent the delegations from being harassed and bothered by the vendors.”

Debebne wishes the Tourism Ministry would task him with official management of the premises. He stressed that the strong, tolerance-based social ties in Sebastia are what prompt him to stay in the village — a scene that totally contradicts the sectarian and confessional conflicts in parts of the Arab world.