The ancient village of Sebastia is losing tourism and agricultural income due to a neighboring Israeli settlement leaking raw sewage onto its fields and failing to protect historical sites, reports Dalia Hatuqa. 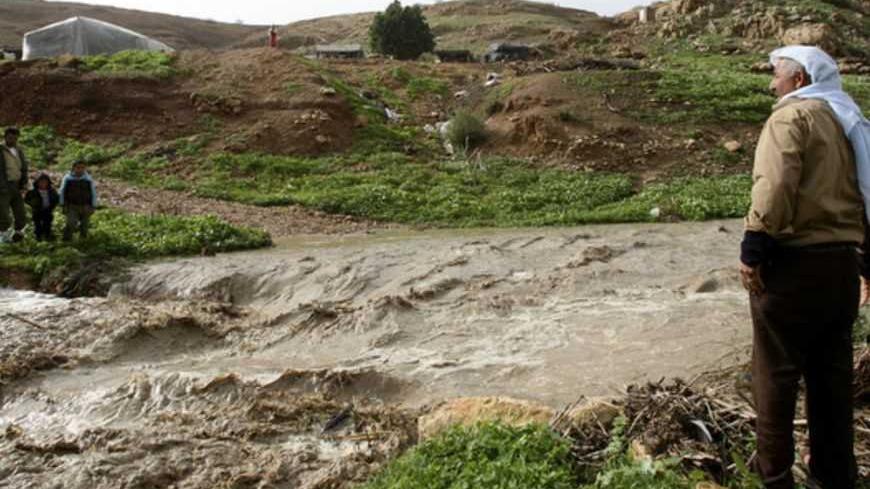 Palestinians look at water in an overflowing stream in the West Bank village of Al-Nassariyeh near Nablus, Jan. 8, 2013. - REUTERS/Abed Omar Qusini

Less than ten miles outside the northern West Bank city of Nablus lies a sleepy town with an ancient and little-known history embedded in its ancient temple, tower and columns. Sebastia, according to Christian tradition, is where the body of John the Baptist was found, and during the Crusades, a cathedral was built over his tomb. Years later, Muslims returning to the area under the rule of Salah al-Din transformed the cathedral into a mosque.

The town also contains Roman, Herodian, medieval and Byzantine relics and ruins, which, peppered among the olive groves, makes it an ideal destination for Palestinian visitors and tourists alike. During the spring, one can visit the Basilica and forum, temple, stadium and a theater dating back to the Roman era, followed by a respite under the olive trees.

But according to residents, the town is becoming increasingly threatened by the nearby settlement of Shavei Shomron, whose residents are constantly uprooting olive trees and, more recently, pumping their sewage waste onto the Palestinian fields their settlement overlooks.

Sebastia’s residents say raw sewage from the settlement flowing onto their fields is causing substantial damage to crops as well as their apricot and olive trees. In addition to threatening the town’s agriculture and environment, the wastewater (which flows from a pipe around the settlement and creates puddles leading down to the fields) will also eventually affect tourism to the archeological sites. But this contamination isn’t the only challenge facing this historical town.

Unlike the town itself (in Area B, which the Oslo Accords place under the joint control of the Palestinian Authority and Israel), the major archaeological site on the hilltop is part of Area C, meaning it’s under Israeli jurisdiction. The obvious ramifications of this to locals is that Israeli citizens can visit the site, but not the village, which means interaction with Palestinians is limited and tourist dollars hardly ever trickle down to local businesses. It also means that the only history Israeli tourists are exposed to is that of ancient times — one that precludes the presence of Palestinians throughout Christian and Muslim periods.

The same also applies to tourists coming from around the world to visit the Holy Land. Far too often, busloads of tourists embark on the ancient sites that span many civilizations, such as the Hellenic towers, the Greek monastery and the temple of Augustus, to name a few. But very few venture into the town itself, missing a chance to see the old stone homes and interact with Sebastia's Palestinians, who have stories of their own to tell.

They also miss the historical buildings in the town that go back to the Crusades, Mamluk and Ottoman times, along with the Nabi (Prophet) Yahya Mosque, which was once a Crusader cathedral. Some two years ago, an Italian-funded renovation and restoration project turned some buildings into a cultural center and a guesthouse featuring large rooms with vaulted ceilings to entice visitors to stay a little longer.

It is worth noting that the main archeological site itself seems to be neglected by the Israeli authorities, while their Palestinian counterparts have no jurisdiction over the area. Relics as old as time pepper the site, and visitors can roam freely among the columns and remnants of walls, with no measures to safeguard these historical treasures from damage.

Simple steps can be taken to help Sebastia maximize its full touristic potential, but threats of pollution from nearby settlements and restrictions on movement by Israeli authorities prevent it from capitalizing on its rich history.