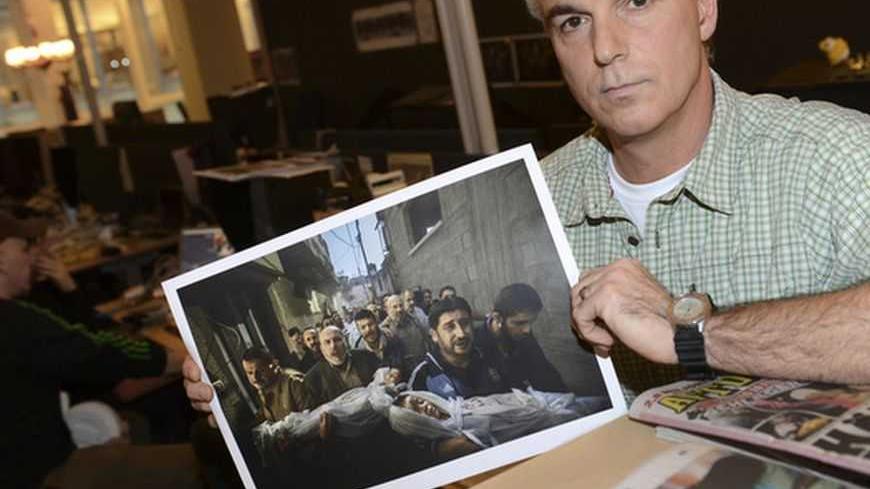 Paul Hansen of Sweden, a photographer working for the Swedish daily Dagens Nyheter, poses holding his picture that won the World Press Photo of the year for 2012, at Dagens Nyheter's office in Stockholm Feb. 15, 2013. - REUTERS/Fredrik Sandberg/Scanpix

On the evening of Nov. 19, a bomb dropped by an Israeli aircraft struck the Jabalya refugee camp home of the Hijazi family, tearing it down and killing Fouad Hijazi and two of his infant sons. This horror story was one of many told by neighbors and loved ones, and documented by Human Rights Watch (HRW) (among other groups) in the aftermath of the Israeli onslaught on Gaza last year. In addition to crushing Fouad and his two sons — Mohamed, 4, and 2-year-old Sohaib — the bomb that leveled the two-story cinderblock house wounded Fouad’s wife, Amna, and the rest of their children.

The aftermath of this tragedy was documented by Swedish photographer Paul Hansen, who captured the funeral procession taking the two toddlers to their burial site. The picture, which shows weeping men holding the children shrouded in white cloth with nothing showing but their listless faces, earned Hansen the 2012 World Press Photo award. Hansen’s picture, one of the many searing images of the eight-day war in Gaza, was taken just one day after the Hijazis were killed, as their bodies were marched through the neighborhood to the cemetery and as their mother lay in an intensive care unit, unable to receive or be consoled by mourners and now homeless.

A staff photographer for Sweden’s Dagens Nyheter newspaper, Hansen submitted the image as just one of more than 103,000 photos sent by 5,666 photographers from 124 countries. Awards in nine themed categories were given to 54 photographers from 32 countries under what is widely known as one of the most prestigious prizes in photojournalism.

Hansen’s picture is telling: Out of last year’s 165 Palestinians killed throughout Israel’s “Operation Pillar of Defense,” at least 33 were children, according to numbers provided by the UN Office for the Coordination of Humanitarian Affairs. During the November onslaught, “several Israeli missiles and a bomb struck civilians and civilian objects, such as houses and farm groves, without any apparent military objective,” said Human Rights Watch, which determined earlier this week that these air strikes were in violation of the laws of war.

Cameras did not capture many of the deaths during that time. Of these, HRW mentions “three men in a truck carrying tomatoes in Deir al-Balah and a science teacher who was sitting in his front yard with his 3-year-old son on his lap, talking to an acquaintance — only the toddler survived, but was seriously wounded.” Israeli-manned drone attacks also killed a 79-year-old man and his 14-year-old granddaughter in the family’s olive grove in Abasan, and a young woman in her backyard in the town of Khuza’a.

On Nov. 18, an attack on a Gaza City house led to the death of 12 people, the single largest number of Palestinians killed in a single incident throughout the war. One day before the Hijazi family tragedy struck, an Israeli bomb leveled the three-story house of the Dalu family, killing ten of its members and two neighbors. Of the family, one man, five women, four children, a grandson and grandmother who lived next door were killed, according to HRW. The strike only spared a 16-year-old, who survived the attack, in addition to the head of the household and his son, who had gone out to buy food.

Gaza was still reeling from this tragedy (the bodies of two of the victims — Yara and Mohamed Al Dalu — were not recovered until Nov. 22) when the Hijazi family was struck. The harrowing retrieval of the bodies of Fouad, Mohamed and Sohaib Hijazi was captured on video. According to HRW, no one knew why their home was targeted. A neighbor was quoted as saying no shooting was ever heard in the neighborhood, and according to the group, the Israeli Intelligence and Terrorism Information Center stated that the three victims were “non-involved” civilians.

The rights group’s field investigations of the incident found no evidence of any military objectives at the time of the attack. Under international law, individuals who deliberately order or take part in attacks which target civilians or civilian infrastructure — whether intentional or unintentional — are responsible for war crimes.

Labels by Israeli authorities aside, the human loss captured by Hansen’s camera is striking. The body of the father of two can barely be seen in a stretcher behind the grieving men carrying the dead toddlers. What Hansen’s camera left out was a story of a family that was at home, many of its members just watching television one November evening before they met their doom. Nur Hijazi, 18, relayed to HRW the events of that fateful night. “Mohamed and Sohaib were with my father in another room. The rest of the family was in another room watching TV. At 7:30, I saw the whole place turn red and suddenly the whole house collapsed on our heads.”

Dalia Hatuqa is a contributing writer for Al-Monitor's Palestine Pulse. A print and broadcast journalist specializing in the Middle East, she is based in the West Bank city of Ramallah and writes for several publications about politics, the economy, culture, art and design. On Twitter: @DaliaHatuqa