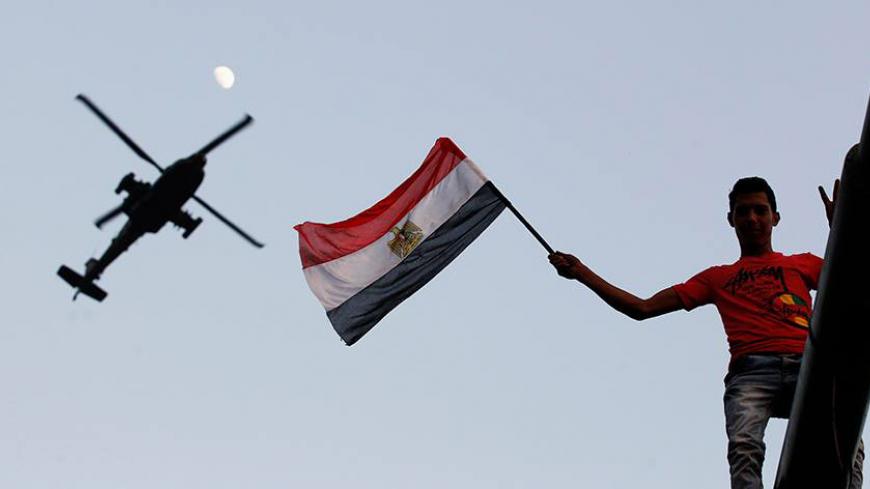 Mountains of words have been written about the wonders of the “Sunni axis” of pragmatic Arab states, each of which maintains an “extramarital affair” — that is, low-profile relations — with Israel. This alliance was supposed to form the basis of a regional peace process about which Prime Minister Benjamin Netanyahu, Defense Minister Avigdor Liberman and even Yesh Atid leader Yair Lapid fantasize. This surreptitious relationship is fueled by secret meetings between all the parties, high-quality intelligence passed from one to the other, and various and sundry efforts at cooperation that take place below the media’s radar.

On the other hand, the Sunni axis has yet to provide the real goods, i.e., a genuine peace process encompassing the entire region. It is doubtful whether it can actually provide such without any real progress on the Palestinian-Israeli track. Netanyahu is fully aware that there is only one free meal ticket available in the Middle East, and that is when you yourself are the main course. Now, however, even the little that has been achieved through surreptitious meetings is currently at risk.

Sources close to the various players have told Al-Monitor that the cogs in the Sunni axis are barely turning, its unity of purpose is being challenged, and whatever harmony there was is growing into discord. Overall, this can be attributed to the mishaps and failures that the Sunni states have faced in Syria in their confrontation with the Russian-Shiite-Alawite alliance, led by Russian President Vladimir Putin, Iranian Ayatollah Ali Khamenei and Syrian President Bashar al-Assad. At the center of this is a serious crisis that has turned into a real conflict between Egypt and Saudi Arabia, the two most senior members of the Sunni alliance. These two countries bear the weight of the entire alliance on their shoulders — Egypt as its strongest member militarily, and Saudi Arabia as its wealthiest member, which funds a significant part of Sunni efforts on various fronts, including keeping the (collapsing) Egyptian economy afloat.

According to various assessments, the crisis erupted in response to Saudi concerns that Egyptian President Abdel Fattah al-Sisi has recently changed course on Syria and now supports keeping Assad in power. Neck-deep in their fight against Assad and the Shiite axis, the Saudis consider this shift in Cairo’s position as more than just an expression of ingratitude. To them it represents a true act of betrayal. The Saudis pumped many billions of dollars into the Egyptian economy to help Sisi survive his first year in office. Now they are so furious at him that they recently withdrew their support. This conflict is shaking the very foundations of the Sunni alliance.

Israel finds itself torn between Saudi Arabia and Egypt. In practical terms, Israel supports the Saudi position that the Shiite axis poses a serious strategic threat to the entire region and therefore understands the Saudis' demand that Assad be removed from power, no matter the ultimate arrangement reached in Syria. On the other hand, Israel also has a close strategic relationship with Egypt, which includes a peace agreement and a common struggle against Hamas in Gaza and the local Islamic State affiliate in Sinai.

Given this situation, there is growing concern in Israel about the stability of the Egyptian regime, especially in light of the rapid deterioration of the Egyptian economy. One senior Israeli security source told Al-Monitor on condition of anonymity, “We don’t entirely understand the logic behind what President Sisi has been doing over the past year. The caution that characterized his first period in office has all but vanished. Now he is taking huge risks, which only serve to increase instability in Egypt.”

The source was referring to a series of arms deals signed by Egypt that raised quite a few eyebrows in Israel. “They bought four German submarines and two French helicopter carriers for a small fortune,” another Israeli security source told Al-Monitor on condition of anonymity. “This comes in addition to huge deals with the Russians and the Chinese to purchase numerous fighter jets.”

According to these sources, it remains unclear what is motivating this unrestrained acquisition of arms at a time when the economy is falling apart, government subsidies are being slashed and popular unrest is growing. “We hope that Sisi knows what he's doing,” the latter source said, “because we don’t really understand it.”

Adding to the problematic situation is the uncertainty surrounding the intentions and tactical approaches that the new US administration will adopt upon assuming office Jan. 20. US President-elect Donald Trump is a mystery to all the region's actors, including Israel. Egypt is even more nervous about the transition, given the strengthening of the Republican Party and calls to cut American aid to Cairo in response to the draconian measures and anti-democratic legislation adopted by Sisi. The Egyptians are hoping to receive “aerial coverage” from Israel, i.e., lobbying assistance on Egypt’s behalf, which has in the recent past come to Cairo’s aid in Washington on more than one occasion.

All of this will have to wait, however, until Trump takes over in the Oval Office next month. The president-elect has very little experience with the Middle Eastern quagmire. He will, therefore, need an extra dose of luck to get through his first few months in power.

Meanwhile, the outgoing administration is trying to minimize the chaos before its term ends. So, for instance, Secretary of State John Kerry told the Saban Forum in Washington, DC, on Dec. 4 that he is on the verge of an agreement between the hawkish parties in Yemen that will at least restore calm to that part of the region, if only for the short term. Starting Jan. 20, everything else in the area will be the responsibility of the Trump administration.