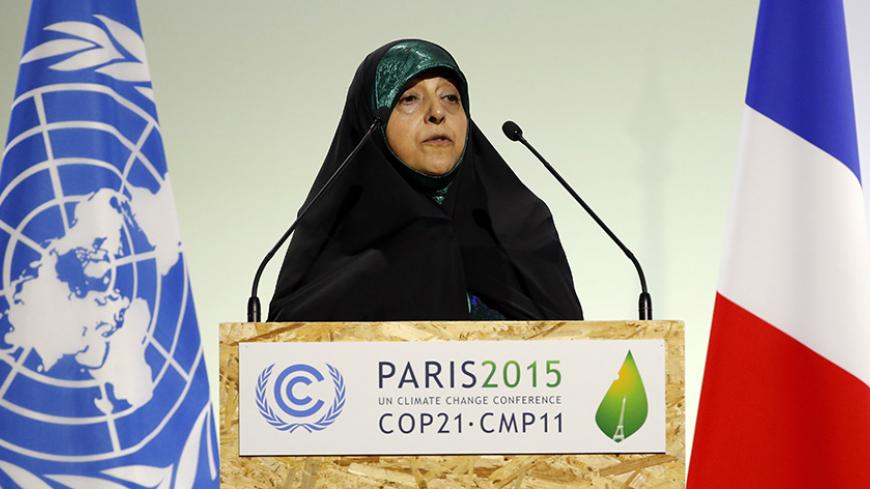 Vice President of the Islamic Republic of Iran Masoumeh Ebtekar delivers a speech during the opening session of the World Climate Change Conference 2015 (COP21) at Le Bourget, near Paris, Nov. 30, 2015. - REUTERS/Stephane Mahe

The resignations of three Cabinet ministers in October had raised hope among many women’s rights activists in Iran that President Hassan Rouhani would nominate at least one woman to one of the vacant positions. While Rouhani pledged to incorporate more women into his government during his 2013 presidential campaign, he has yet to fulfill this promise.

Upon taking office, Rouhani named three women as vice presidents and also tried to place more women as senior state officials. After the recent Cabinet reshuffle, he named Zahra Ahmadipour as a new vice president as well as head of Iran’s Cultural Heritage, Handicrafts and Tourism Organization. Reports suggest that the president is also considering appointing Zahra Shojaei as the head of Iran’s National Library and Archives Organization. If finalized, these two women will replace their male colleagues Masoud Soltanifar and Reza Salehi Amiri, who have now become minister of sports and youth affairs as well as minister of culture and Islamic guidance, respectively, after winning votes of confidence from parliament.

Yet it seems that three female vice presidents in the Cabinet is not enough for Iranian women’s rights activists, who remain critical of the dearth of female ministers. In a public statement earlier in November, a group of activists referred to Rouhani’s unfulfilled campaign promise to set up a ministry for women’s affairs and said, “Not only has there been no ministry set up for women, but the incumbent administration has also failed to have a woman in a ministerial position … so that the Cabinet of ‘moderation’ can remain a male-dominated one. … Iran is to hold its 12th presidential election in a few months. A great portion of voters are women. Are they planning to invite this group to the ballot boxes with the promise of setting up a ministry for women again?"

In an interview with Al-Monitor, Iran-based women’s rights activist Marzieh Mortazi Langroudi said the absence of female ministers in the Rouhani administration is due to how “many organizations comment on the Cabinet lineup.” Langroudi added, “The government must take their views into account. In such a situation, I should note that these influential organizations have neither now nor in the past been happy about having women in the Cabinet when they were selecting [potential] ministers.”

According to Langroudi, the unique power relations in political establishments like that in Iran, where the authoritarian, patriarchal and traditional approach dominates the country’s political structure, do not leave room for women in major political arenas. She told Al-Monitor, “Although a woman was appointed as a minister under the former president, there are still serious obstacles in the way of having a female point of view in the major decision-making processes in Iran.”

Langroudi was referring to Marzieh Vahid Dastgerdi, the Islamic Republic’s first female minister. She served as minister of health and medical education during Mahmoud Ahmadinejad’s second term. In the view of Langroudi, Dastgerdi’s time in office showed that Iranian women — largely as a result of their absence in top-level politics — are unfamiliar with the dynamics behind ministerial appointments, let alone the dealings at the main tables of power. She told Al-Monitor, “In such a situation, the debate about a ministry for women seems more like a gesture of political enlightenment than an attempt to benefit from women’s views and experiences in politics and macro management of society. Our aim with wanting a female minister is not just to have a physical presence in positions such as ministerial and presidential posts. Our goal of a female presence in macro politics is [to empower] those women who have different thinking than men and have female-oriented experiences focused on power and management.”

In addition to the current three female vice presidents, a small number of other women have also held high-level managerial positions under the current administration. They include Marzieh Shahdaei, who is both deputy oil minister and head of Iran's National Petrochemical Company, head of the National Iranian Productivity Organization Roya Tabatabaei Yazdi and head of the National Standards Organization Nayereh Piroozbakht.

The rise of Marzieh Afkham, who previously served as Foreign Ministry spokeswoman and is now Iran's ambassador to Malaysia, is another attempt by the Rouhani administration to appoint women to high-level managerial positions. Afkham is the Islamic Republic’s first female ambassador. Meanwhile, four of Iran’s 430 governors are women while only 13 of the 1,059 district prefects in the country are female.

Langroudi believes that the presence of women in mid-level management posts has been welcomed and accepted by Iranian society in recent years. She told Al-Monitor, “The public believes female managers work with ‘clean hands’ and are more efficient than men.” She added, “We hope that the experience of having women [hold office] at these levels will pave the way for their qualitative presence in macro politics.”

Amid the continuing criticism over the absence of female ministers, there is another debate ongoing in Iran about the interpretation of the term “rijal,” which means “men” in Arabic. Article 115 of Iran’s constitution states that the president must be chosen from among the “religious and political rijal.” Some argue that the term simply refers to “personalities” when used in social or political discourse and that a “political rijal” can be a woman. The legally ambiguious term has been the subject of different interpretations and approaches in past decades, and is especially heatedly discussed now, in the runup to the May 2017 presidential election.

This legal ambiguity has prevented the Guardian Council, which is responsible for vetting presidential candidates, from clearing any woman to run in the Islamic Republic’s 11 presidential elections since 1979. However, this year — according to Guardian Council spokesman Abbas Ali Kadkhodaei — the council’s research center is holding “regular daily meetings” to evaluate the “criteria for 'political rijal” and has in the past few weeks even invited the public and experts to give their opinions on the matter. It should be noted that some prominent political figures, such as former President and current Expediency Council Chairman Ayatollah Ali Akbar Hashemi Rafsanjani, say women must be considered “political rijal” and thus eligible to run in presidential elections.