Iran’s president names three women as deputies and aides amid rising criticism over the lack of female ministers. 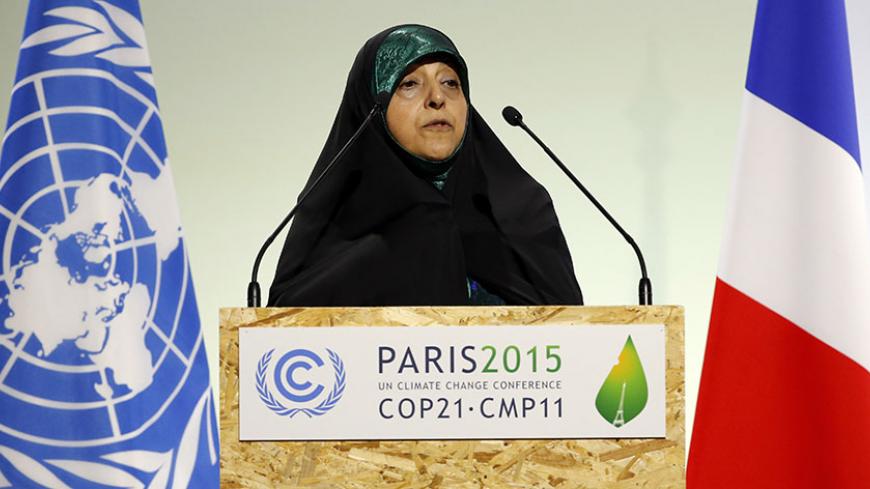 Vice President of the Islamic Republic of Iran Masoumeh Ebtekar delivers a speech during the opening session of the World Climate Change Conference 2015 (COP21) at Le Bourget, near Paris, France, Nov. 30, 2015. - REUTERS/Stephane Mahe

Facing heightened criticism, Iran’s moderate President Hassan Rouhani has appointed two women as vice presidents and one woman as his aide in an apparent attempt to appease Reformists who had demanded female ministers.

On Aug. 9, Rouhani named Masoumeh Ebtekar as vice president for women’s and family affairs. Prior to this, Ebtekar served as head of the Environmental Protection Organization during the first term of Rouhani’s presidency. The president also appointed Shahindokht Mowlaverdi — who was previously vice president for women’s and family affairs — as his aide on citizenship rights’ affairs. Mowlaverdi enjoys popularity among women for her efforts regarding women’s rights. Reports from the past week had indicated that Mowlaverdi was being considered for the position of minister of education.

The third appointment caught the attention of both media and social networking activists. Laaya Joneidi was chosen by the president to serve as vice president for legal affairs. Joneidi finished her post-doctorate in law at Harvard University in 2003; prior to this, she studied law at the University of Tehran, which is counted as among the best in Iran. Besides her native Persian, Joneidi is reportedly fluent in Arabic, English and French.

By not picking any woman as a minister, Rouhani has drawn ire from Reformists and women’s rights activists. Parvane Salahshouri, the chairwoman of the "Women" faction in parliament, said Aug. 9, “Shockingly and surprisingly, half of Iranian society was ignored by the president. [Compared to] the countries in the world, educated Iranian women have little presence at the high level of political management, while they have been very active at other levels of the political and social [arena].”

She added, “Creating equal opportunities and prohibiting gender discrimination are the promises of the president to women. Unfortunately, in the first step, no opportunity was given to women, let alone equal opportunity. … If we are drafting a development plan for the country, we should know that development won’t come about without the presence of women.”

First Vice President Eshaq Jahangiri, who was reappointed on Aug. 8 and played a great role in Rouhani’s victory in the May 19 presidential election, also announced that the new ministers, who are all men, contrary to Rouhani’s campaign promise, have been ordered to pick women as their deputies.

“During today’s Cabinet session, the president emphasized [on this issue that] it is not accepted for ministers not to have a female deputy. Therefore, I assure you that we will use a large number of proficient and educated women in the 12th government,” Jahangiri told a group of reporters.

In reference to criticism of the president for not choosing ministers from minorities, Jahangiri said, “For the purpose of the presence of minorities in the government, we are insisting on appointing deputies of ministers, ambassadors and governors from various minorities.”

During the May presidential election, minorities — especially Sunni voters — mostly cast their ballots in favor of Rouhani, who had promised to pave the way for their presence in government.

In a critical speech, Mansour Moradi, a Sunni parliament member, addressed the president on Aug. 8: “Kurds trusted you; then you should also trust the people of Kurdistan. What percentage of your Cabinet come from the Sunni [population]? We expect [you] to use former [Sunni parliament members and] representatives of Kurdistan at managerial levels.”