Iranian President Hassan Rouhani’s failure to nominate a single female Cabinet minister is leading women to lose faith in his promises — but not hope in their future. 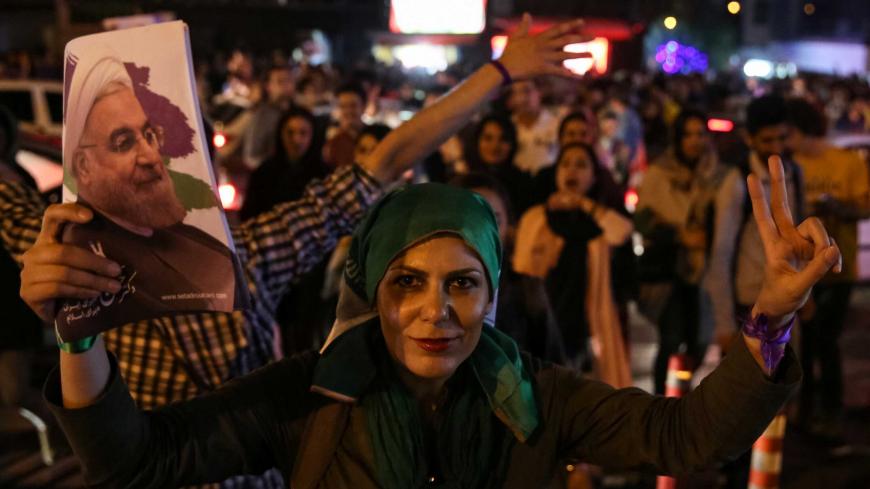 Supporters of Iranian President Hassan Rouhani celebrate his victory in the presidential election in Tehran, Iran, May 20, 2017. - TIMA via REUTERS

“Women get absolutely zero for supporting [Hassan] Rouhani! If we hadn’t voted in this election, does Rouhani think he would have gotten re-elected with the numbers he did?” Leila, a 34-year-old women’s rights activist, shot off in an angry text on Telegram after it was revealed that Iran’s president had not nominated any women to join his second-term Cabinet. “Even [Mahmoud] Ahmadinejad had a woman as a minister!” Ava responded in the private group for young women’s rights activists, referring to the conservative former president’s 2009 appointment of Marzieh Vahid Dastjerdi as the Islamic Republic’s first female minister. She served as health minister.

“This is a joke. How disrespectful to all the women who supported him,” added Fatemeh, a 25-year-old political science student. Most of these young women do not know each other — they are activists scattered across the country — but they share each other’s anger at the president as he begins his second term.

During both the February 2016 parliamentary elections as well as the city and village council elections of May 2017, women won an unprecedented number of seats. For the first time in the history of the Islamic Republic, Iranians chose women in high numbers, demonstrating that when women have the opportunity to run for office, voters do not have an issue with casting their ballots for them. Thus, understanding that the predominantly young electorate demands more social and cultural rights, including an increased presence of women in leadership positions throughout the country, 157 members of parliament wrote a letter to Rouhani on July 19 urging him to nominate women for his second-term Cabinet.

When Rouhani failed to do so, women across social media and in opinion pieces aired their dismay and anger at the president. “I don’t know if he’s trying to allay fears with the conservatives who lost badly in the elections, and that’s why he didn’t nominate any women, or if he actually doesn’t believe in women holding higher leadership positions in political life,” Farzaneh Hosseini, a women’s rights activist, told Al-Monitor. In a similar line of criticism, on Aug. 21, former conservative journalist and filmmaker Mohammad Nourizad blasted the clerical class for its “backward” views on women and blamed it — and by extension Rouhani, a cleric — for the lack of female nominees for ministerial positions. He asked, “Could it be that the hopes for anything different were just misplaced?”

In a move that further angered activists and indicated to them that Rouhani was more closed than they had wished, Laya Joneidi, his pick for vice president for legal affairs, told the Reformist Shargh Daily on Aug. 21 that the reason for her sudden change in attire was not entirely hers. She said, “The respected president, who was elected with 24 million votes, asked me to work with the government. He said my service was needed [and] he also said that the Cabinet’s protocol is such [that a woman wears a chador].” The full-length black chador is commonly favored by conservative women. Prior to assuming her new position, Joneidi — a law professor at the University of Tehran — wore colorful headscarves and overcoats.

Voters and activists took to social media to blast the president for his request of Joneidi. Indeed, it has not been lost to the public that none of the 19 male Cabinet ministers are likely to have personally received fashion advice by Rouhani. But some also turned their ire toward the new vice president for quietly accepting such a demand and failing to stand up for her right to appear in public as she deems fit, within the confines of Iranian law.

To be sure, Rouhani has likely faced extreme pressure behind the scenes to make certain concessions to conservatives in the regime. Having women involved in high levels of government is a thorny issue for the political and clerical elites. For instance, it took decades before women were assigned certain posts by the Foreign Ministry. Marzieh Afkham became the Foreign Ministry’s first female spokesperson in 2013, and two years later, she was appointed as the first female ambassador of the Islamic Republic. Yet these opportunities continue to be highly limited. Apart from having to confront the ongoing restrictions, women in the Foreign Ministry, as in other sectors of government, constantly have to struggle to prove that they are capable enough.

Thus, some women’s rights activists were hopeful that Rouhani would fulfill his campaign promises and offer more formal leadership positions for women. Nonetheless, his unwillingness to even nominate women as ministers is a stab in the back of women, who voted for him in large numbers. Many think women would likely not have been confirmed, even by the incumbent reform-leaning parliament.

“These clerics show us every time that we shouldn’t take their word for granted,” Fattaneh, a women’s rights activist from the city of Isfahan, told Al-Monitor. “I always feel disappointed; duped, almost. But I really thought that we had a chance to get women at least nominated for ministerial positions this time.”

“I’m not surprised in the least,” Mahnaz, a veteran women’s rights activist in Tehran, told Al-Monitor. “Those of us who have fought against this system for decades know not to trust a cleric when he promises women something. Everything we’ve gained in the past nearly 40 years has been because we have taken it with a long struggle. We haven’t been given anything. This fight is no different.”

Indeed, activists such as Mahnaz, although disappointed in the president, are not hugely surprised. Empty promises for increased women’s rights by pro-reform politicians have become commonplace for activists — and such setbacks are nothing more than bumps in the road. As for looking ahead, Mahnaz told Al-Monitor, “What we have now that’s different than in years past is an increased presence of women in city and village councils. We want to empower those voices and try to get more and more women elected in such positions in the future.” In a telling retort to the Rouhani administration and its slogan of “Prudence and Hope,” she added, “We don’t hold out hope on these old clerics changing their minds. Our hope lies in the young women who are stepping up to lead and the younger generation that is willing to support them.”